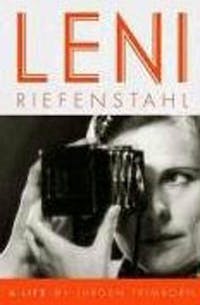 Dancer, actress, mountaineer, and director Leni Riefenstahl's uncompromising will and audacious talent for self-promotion appeared unmatched—until 1932, when she introduced herself to her future protector and patron: Adolf Hitler. Known internationally for two of the films she made for him, Triumph of the Will and Olympia, Riefenstahl's demanding and obsessive style introduced unusual angles, new approaches to tracking shots, and highly symbolic montages. Despite her lifelong claim to be an apolitical artist, Riefenstahl's monumental and nationalistic vision of Germany's traditions and landscape served to idealize the cause of one of the world's most violent and racist regimes.

Riefenstahl ardently cast herself as a passionate young director who caved to the pressure to serve an all-powerful Führer, so focused on reinventing the cinema that she didn't recognize the goals of the Third Reich until too late. Jürgen Trimborn's revelatory biography celebrates this charismatic and adventurous woman who lived to 101, while also taking on the myths surrounding her. With refreshing distance and detailed research, Trimborn presents the story of a stubborn and intimidating filmmaker who refused to be held accountable for her role in the Holocaust but continued to inspire countless photographers and filmmakers with her artistry.

"An energetic job of trying to ferret out the facts of Riefenstahl's life, facts obscured by her own lies, boasts, and denials, and a job made all the more difficult, as Mr. Trimborn writes, by the lack of dependable evidence from other sources relating to many of the early chapters of her life."—Michiko Kakutani, The New York Times

"Relentlessly ambitious German dancer/actress/director/photographer Leni Riefenstahl continued to reinvent herself up until her death in 2003 at the age of 101. Thanks to her obfuscation, much of what she did—and why—remains in dispute, even though she lived in the glare of the public spotlight. Her acting in and directing of mountain films, a popular subgenre of German cinema in the 1920s and early 1930s, brought her to the attention of Adolf Hilter and his Minister of Propaganda, Josef Goebbels. She was then tasked with making several propaganda films, including the (in)famous Triumph of the Will and the much-praised Olympia. Numerous interviews, books, and documentaries about Riefenstahl have appeared over the years, but none seems to have conclusively established the whole truth, and her own autobiography is widely considered self-serving and unreliable. Trimborn (Film, Theater, and Art History, University of Cologne, Germany) has produced a readable and well-researched book . . . Riefenstahl's actions and motives may always remain a mystery. Recommended for cinema collections."—Roy Liebman, Los Angeles Public Library, Library Journal

"Leni Riefenstahl was an artist of tremendous powers, but her most entrancing creation was herself. Film professor Trimborn spent years researching the beautiful, ferociously ambitious German filmmaker's long and complicated life, uncovering documents and gathering testimony that refute Riefenstahl's sanitized version of her experiences as a Nazi insider. Judiciously cognizant of contradictions and ambiguity, Trimborn insightfully parses Riefenstahl's passions for sports, dance, and film and her gift for finding men to back her creative endeavors. A 1932 fan letter gained Riefenstahl entry into Hitler's inner circle. Trimborn masterfully analyzes her masterpieces, Triumph des Willens (Triumph of the Will), and Olympia, placing her 'fascination with the beautiful and strong' in opposition to the ugly facts about her Nazi collaborations. But no matter how many 'denazification' hearings she underwent, she was always officially exonerated, free to reinvent herself as a photographer in the Sudan and underwater, after taking up scuba diving in her 70s. Embraced by Mick Jagger, David Bowie, and Madonna, Riefenstahl ultimately premiered her final film on her 100th birthday. Trimborn's scrupulous analyses of Riefenstahl's aesthetic triumphs, artistic opportunism, sustained vitality, and monstrous moral failings are utterly compelling."—Donna Seaman, Booklist (starred review)

"A well-researched, judicious view of the life of the woman whose arresting images of the Third Reich pursued her until her death in 2003, at the age of 101. Riefenstahl cooperated somewhat with Trimborn (Film, Theater, Art History, University of Cologne), though as he shows repeatedly, she guarded her story with Cerberean ferocity. For nearly 60 years, she denied and lied about her past, and Trimborn does his best to separate truth from fiction and self-deception. For her early life, he is forced to rely on her memoirs (Leni Riefenstahl, 1993), a volume he calls 'worthless as a historical document.' Trimborn tells us about Riefenstahl's harsh father, her youthful determination to be a dancer (a knee injury ended her promising career), her explosive arrival in the 1920s German cinema as a sexy star of the 'mountain film' genre. Trimborn shows Riefenstahl's fierce ambition to become a director in a male-dominated art form. In the early 1930s, Adolf Hitler became her hero, her patron. (Trimborn does not think anything sexual occurred between them, though opportunities were ample.) For the Nazis she produced The Triumph of the Will, the world's most notorious propaganda film, which premiered on the Fuhrer's birthday in 1938 and conferred upon her a celebrity she would never again enjoy. Trimborn examines all of Riefenstahl's films (with closest looks at her early ones) and views her principally as a 'careerist.' She was interested in making films, and Hitler was a devoted supporter, funding her efforts even as Allied bombs rained on German cities. The author carefully chronicles Riefenstahl's long post-war life: her numerous failed film projects, her many trips to Africa (her stunning photographs of the Nuba people made her financially secure once again), her late-life underwater film (Underwater Impressions, 2002). Casts a bright light on the dark past of a superb artist who cozied up to killers, got what she wanted and spent the ensuing decades as the queen of denial."—Kirkus Reviews

"Nothing tests Keats's adage that beauty is truth more severely than the work of the Third Reich's leading filmmaker, whose notorious documentaries Triumph of the Will and Olympia cloaked the hideousness of Nazi Germany in grand, gorgeous, emotionally overpowering imagery. In this soberly critical biography, film historian Trimborn analyzes the brilliant techniques with which Riefenstahl 'replace[d] politics with aesthetics' and made Hitler 'an almost erotic object' to the adoring German masses. (Her mystically monumental style, he notes, lived on to influence Hollywood blockbusters like Star Wars and The Lion King, as well as Mick Jagger's stage shows.) He also dissects the lesser falsehoods Riefenstahl propagated to downplay her close relationship with Hitler and complicity with the Nazis. He reprints examples of her fawning praise of the feuhrer and reconstructs her erasure of a Jewish collaborator from the credits of one of her films, her use of Gypsies interned in a forced labor camp as extras (many of whom were later sent to Auschwitz) and her witnessing of a massacre of Jews in Poland, which she protested but which didn't dilute her enthusiasm for Hitler. Trimborn's brisk, lucid account gives the director her artistic due while sternly correcting her evasive mythology, and makes for an illuminating look at a fascinating, troubling figure."—Publishers Weekly


WHEN KING WILHELM I OF PRUSSIA was proclaimed German kaiser in 1871, Berlin became a...

Jürgen Trimborn; Translated from the German by Edna McCown

Jürgen Trimborn, born in 1971, is a professor of film, theater, and art history at the University of Cologne and serves as a consultant on films of the Third Reich for the German and American film industry. He lives and writes in Cologne and east Belgium.