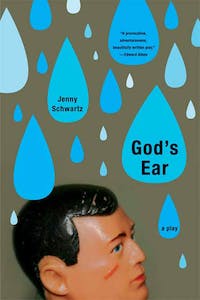 God's Ear marks the debut of Jenny Schwartz, "an indelibly clever playwright, possessed of linguistic playfulness and a lively sense of rhythm" (Alexis Soloski, The Village Voice). Through the skillfully disarming use of clichéd language and homilies, the play explores with subtle grace and depth the way the death of a child tears one family apart, while showcasing the talents of a promising young playwright who "in [a] very modern way [is] making a rather old-fashioned case for the power of the written word" (Jason Zinoman, The New York Times).

Fresh from its critically acclaimed off-off-Broadway run this past spring, God's Ear moves off-Broadway to the Vineyard Theatre in April 2008.

"Words gush forth in torrents, spewing up like geysers on a ghostly plain, in God's Ear, an arrestingly odd new play by Jenny Schwartz that will surely fascinate many . . . The superbly realized production of God's Ear that opened Thursday night at the Vineyard Theater is the same one that was presented to much acclaim last year by the adventurous Off Off Broadway theater company New Georges . . . God's Ear is composed of virtuosic monologues and dialogues that reveal Ms. Schwartz's gift for constructing quirky lyrical riffs that stop making sense and then start up again from one line to the next . . . The cleverness of the writing is undeniable, and certainly diverting."—Charles Isherwood, The New York Times

"This ode to love, loss, and the routines of life has the economy and dry wit of a Sondheim love song . . . Schwartz is a real talent and she is trying something ambitious . . . In [her] very modern way, [she is] making a rather old-fashioned case for the power of the written word."—Jason Zinoman, The New York Times

"[Schwartz] masterfully use[s] language without ever trusting it to tell the truth . . . Just like Joan Didion in The Year of Magical Thinking, Schwartz knows that unbearable news can make us turn our daily lives into distracting flights of fancy."—Mark Blankenship, Variety

"What is revolutionary is Schwartz's ability to make linguistic gamesmanship into something profoundly moving."—Helen Shaw, Time Out New York

"A playwright to reckon with."—Alexis Soloski, The Village Voice

The Shadow of a Future Self
by Nina Steiger


Jenny Schwartz uses language like a composer might, embellishing a simple melody with harmonics. Harmonic pitches, made up of partial or component...

Jenny Schwartz's play God's Ear was produced off-off Broadway in May 2007 and moved off-Broadway in April 2008. Two of Jenny's plays, Intervals and Cause for Alarm, were part of the New York Fringe Festival, in 1998 and 2002, respectively. She is the recipient of a grant from the Lincoln Center Lecomte du Nuoy Foundation and is the 2007-2008 recipient of the Dorothy Stresling Foundation Fellowship at Soho Rep. Jenny completed two years of fellowship in the Playwriting Program at the Julliard School and holds an MFA in theater directing from Columbia University.