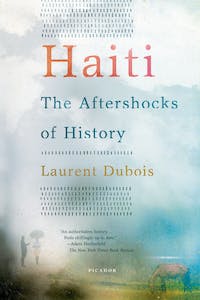 
Even before the 2010 earthquake destroyed much of the country, Haiti was known as a benighted place of poverty and corruption. Maligned and misunderstood, the nation has long been blamed by many for its own wretchedness. But as acclaimed historian Laurent Dubois makes clear, Haiti's troubled present can only be understood by examining its complex past. The country's difficulties are inextricably rooted in its founding revolution—the only successful slave revolt in the history of the world; the hostility that this rebellion generated among the colonial powers surrounding the island nation; and the intense struggle within Haiti itself to define its newfound freedom and realize its promise.

Dubois vividly depicts the isolation and impoverishment that followed the 1804 uprising. He details how the crushing indemnity imposed by the former French rulers initiated a devastating cycle of debt, while frequent interventions by the United States—including a twenty-year military occupation—further undermined Haiti's independence. At the same time, Dubois shows, the internal debates about what Haiti should do with its hard-won liberty alienated the nation's leaders from the broader population, setting the stage for enduring political conflict. Yet as Dubois demonstrates, the Haitian people have never given up on their struggle for true democracy, creating a powerful culture insistent on autonomy and equality for all.
Revealing what lies behind the familiar moniker of "the poorest nation in the Western Hemisphere," this indispensable book illuminates the foundations on which a new Haiti might yet emerge.

"Well-written, authoritative history . . . enriched by careful attention to what Haitian intellectuals have had to say about their country over the last two centuries."—Adam Hochschild, The New York Times Book Review

"An admirable chronicle . . . Reading Haiti: The Aftershocks of History, I was repeatedly struck by the deep and detailed explanations of things that had never quite made sense to me about Haiti. Those ‘aha' moments were some of the most satisfying passages in this engrossing and deeply-researched book."—Susannah Nesmith, The Miami Herald

"A sweeping, passionate history of Haiti . . . Smart, honest, and utterly compelling, this book is the national biography this country and its people deserve."—Boston Globe

"A book as welcome as it is timely: a lucid one-volume history of the nation, from Toussaint to the present, anchored in scholarship but rendered as a comprehensive-but-swift narrative for the general reader."—The Nation

"This excellent, engaging history seeks to strip away centuries of mocking and reductive bias. Dubois's Haiti is a land of ceaseless activity, a ferment of suppression and insurrection exacerbated by the mercenary intrusions of foreign powers—in the past century, chiefly the United States. Dubois also traces a parallel history of bold social experiments on the part of everyday Haitians . . . Throughout, he makes clear how economic pressures and political crises have left even the county's better leaders hamstrung, without downplaying their failures in fulfilling Haiti's great promise."—The New Yorker

"A vigorous, knowledgeable and empathetic account . . . A pleasure to add to my collection of writings about Haiti."—San Francisco Chronicle

"Fascinating . . . For anyone with even a little interest in Haiti, this book is an essential read."—Dan Simpson, Pittsburgh Post-Gazette

"Very few times have I been able to say that I learned something new about a subject with which I am ostensibly familiar. But this is the case on virtually every page of Laurent Dubois's Haiti: The Aftershocks of History. Dubois, the veritable dean of Haitian studies, has produced that rarest of things: a highly entertaining narrative for the general reader, but one deeply satisfying to the scholar as well. This brilliant book, a compelling and colorful saga of the triumph and tragedy of Haitian revolution and freedom, should be required reading for anyone who wonders from whence the ‘curse on Haiti' really emanated."—Henry Louis Gates Jr., The Alphonse Fletcher University Professor, Harvard University

"Laurent Dubois is an impeccable scholar and a master storyteller. Haiti: The Aftershocks of History is the new standard work in English on the astounding panorama of Haitian history, from the seismic events of its founding to the earthquake of 2010."—Madison Smartt Bell, author of All Souls' Rising

"Haiti's history is tragic and noble, worth knowing for its own sake and essential to the country's future. This book is an admirable synthesis of that history—sensible, comprehensive, and gracefully written."—Tracy Kidder, author of Mountains Beyond Mountains

"A masterpiece . . . For those who, perusing the headlines, sometimes find themselves moved to ask the perennial question ‘Why is Haiti like that?,' Laurent Dubois provides a brilliant and perceptive riposte. Wielding sharp, unsettling anecdotes and a flowing prose style, Dubois plumbs Haiti's rich and singular history—with its unlikely heroes and persuasive demons, its exploiters and its misérables, its compromisers and its intransigents—to teach us important and subtle lessons in revolution, occupation, and liberation. These lessons go well beyond the concerns of Haitianists to encompass the great surge of human history, which may well be bearing us, today, toward another similar age of revolution and upheaval."—Amy Wilentz, author of The Rainy Season

"Dubois chronicles the "devastating set of authoritarian political habits" that have hamstrung the impoverished nation since its 1804 creation through the only successful slave revolt in modern history. Throughout its struggle to take its place in the family of nations, the obstacles of giant debts imposed from without and political instability generated from within have created a ruling class that "realized they couldn't rebuild the plantations or stop the country's majority from pushing for land and autonomy. What they could do, however, was channel and contain that push, surround and stifle it." For more than a hundred years after its independence, Haiti's political struggles, from presidential intrigues to outright revolution ushered in more than a dozen leaders—and nearly as many constitutions—creating a legacy of instability that left Haiti vulnerable to a 19-year occupation by U.S. Marines. Decades of absolute dictatorship by "Papa Doc" Duvalier and his feckless, brutal son, "Baby Doc" Duvalier left a looted, indebted nation whose civil institutions "had been largely dismantled or absorbed by the state." Dubois does an admirable job of condensing turbulent political history into a narrative. He places deep and abiding faith in the resilience of Haiti's disempowered populace to survive the earthquake, but catalogues a bitter litany of reasons why the descendants of a successful revolution have not achieved anything close to economically successful, stable, democratic independence."—Publishers Weekly

"For eighty years Haiti has been judged," Louis-Joseph Janvier wrote in 1883. Since the birth of their country in 1804, Haitians had been incessantly "accused" by outsiders, and it was time for them to respond.1

Laurent Dubois is the author of Avengers of the New World: The Story of the Haitian Revolution, a Los Angeles Times Best Book of 2004. The Marcello Lotti Professor of Romance Studies and History at Duke University, Dubois has written on Haiti for the Los Angeles Times, The Nation, and the New Yorker Web site, among other publications, and is the codirector of the Haiti Lab at the Franklin Humanities Institute. He lives in Durham, North Carolina.