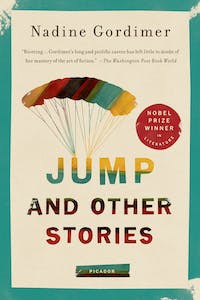 Ranging from the dynamics of family life to the worldwide confusion of human values, Nobel Prize-winner Nadine Gordimer gives readers access to many lives in places as far apart as suburban London, Mozambique, a mythical island, and South Africa.

"Readers of Ms. Gordimer's fiction know that the riveting details, the epiphanies scattered throughout the narrative that shock and surprise, function within a larger vision. This expansive vision, its moral power and artistic integrity, are what elevate her fiction above that of most of her contemporaries."—The New York Times Book Review

"Ms. Gordimer's South Africa is conveyed in passages of relentless sensual and emotional fidelity. Moments matter, deserve the painstaking eye for detail, the moral intelligence she devotes to rendering them, her determination to make each sentence count and her characters accountable . . . She is a master of realistic narrative . . . The tales in Jump are not committed to specific ideology but to the grand task of spiritual examination and social redemption."—The New York Times

"In this tour de force . . . her voice is like that of a siren, simple words arranged like flowers or embers. These are Gordimer's tales. Go with her, there are things to see."—Los Angeles Times

"Stories as strong as any Gordimer has written . . . Reading her is more like standing in a high wind than being lulled by breezes."—The Boston Globe

"Gordimer's stories are captivating, in the literal sense of holding in thrall the reader's entire attention."—Chicago Tribune

"Fascinating . . . It's as if the mirror that Gordimer holds up to South Africa has exploded, leaving a scatter of fragments that we perceive haphazardly, as a strong searchlight moves over the pieces, illuminating first one, then another."—USA Today

"A gallery of riveting tales . . . Gordimer's long and prolific career has left little doubt of her mastery of the art of fiction."—The Washington Post Book World

"Gordimer's talent is poetic and intellectual . . . Her best writing, sensuous, but aerated with deep intelligence, moving shrewdly between the serene claims of the poetic and the frantic compulsions of the political, makes her the lyrical analyst of an entire country."—James Wood, The Guardian (London)

"Insecurity—personal and political—is the common element in Nadine Gordimer's marvelous new collection of short stories . . . Home is a word that echoes through the collection and seems to have a quite particular meaning. It's a place that can only be achieved in a new South Africa."—The Observer (London)

"Whether writing from the point of view of an Afrikaner farmer or an orphaned black girl, an English filing clerk or a Jewish watchmaker, a 'colored South African woman' or a white Swedish man, Gordimer is able to get into the skin of the characters and tell their stories in a most convincing way."—The Gazette (Montreal)

"Nadine Gordimer can be the literary equivalent of looking at something extraordinary at the bottom of a cool and absolutely clear sea. There is a lucid, elegant specificity in her prose, a seemingly effortless avoidance of clichés . . . she is writing at her clearest, eloquent best, few are better or even as good."—The Globe and Mail (Toronto)

"Innocents who end up in bed with terrorists; children and adults entangled in the barbed wire of political events they can't control or understand. In her latest collection of stories, Gordimer revisits old but rich territory—South Africa—and other locations where the balance of order has gone awry. Gordimer's ability to transcend racial and gender barriers comes forth both in the collection as a whole and within individual stories that are told from multiple perspectives, such as "What Were You Dreaming?" This volume of fiction burns with the brilliance readers might expect to find only in an anthology. The sophisticated surprise endings found in "Some Are Born to Sweet Delight" and "The Moment the Gun Went Off" strike at the gut as effectively as the simple parable "Once Upon a Time," which tells of a family caged in by its fear. Highly recommended."—Library Journal (pre-pub alert)

"Gordimer has rarely been more profound or more quietly brilliant than in these exquisitely subtle stories."—Publishers Weekly

Jump and Other Stories

Jump
He is aware of himself in the room, behind the apartment door, at the end of a corridor, within the spaces of this destination that has the name HOTEL LEBUVU in gilt mosaic where he was...

Nadine Gordimer (1923-2014), the recipient of the 1991 Nobel Prize in Literature, was born in a small South African town. Her first book, a collection of stories, was published when she was in her early twenties; she went on to publish more than forty works of fiction and nonfiction.

Her novels include the Booker Prize-winning The Conservationist, Commonwealth Writers’ Prize-winning The Pickup, and No Time Like the Present. A World of Strangers, The Late Bourgeois World, and the award-winning Burger's Daughter were originally banned in South Africa. Gordimer’s short story collections include Loot , Jump and Other Stories, and Something Out There. She also published literary and political essay collections such as The Essential Gesture; Writing and Being, the Charles Eliot Norton Lectures she gave at Harvard in 1994; and Living in Hope and History.

Ms. Gordimer was a vice president of PEN International and an executive member of the Congress of South African Writers. She was a fellow of the Royal Society of Literature in Great Britain and an honorary member of both the American Academy of Arts and Letters and the American Academy of Arts and Sciences. She was also a Commandeur of l’Ordre des Arts et des Lettres (France). She held fourteen honorary degrees from universities including Harvard, Yale, the University of Leuven in Belgium, Oxford University, and Cambridge University.