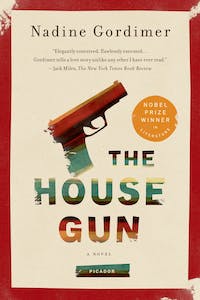 A house gun, like a house cat: a fact of ordinary daily life. How else can you defend yourself against intruders and thieves in post-apartheid South Africa? The respected executive director of an insurance company, Harald, and his doctor wife, Claudia, are faced with something that could never happen to them: Their son, Duncan, has murdered a man. In this powerful and disturbing anatomy of a murder, Nadine Gordimer examines the effect of violence on the complicated web of love that holds together parents and children, friends and lovers.

"Elegantly conceived, flawlessly executed . . . Gordimer tells a love story unlike any other I have ever read."—Jack Miles, The New York Times Book Review

"As the moral anatomy of a murder, The House Gun will seem to American readers closer to their own existence than many Gordimer books."—The Washington Post

"An intellectual thriller with a soap opera engine . . . Nothing short of epic. "—The Baltimore Sun

"A memorable blend of the topical and the timeless, at once a profound, lingering meditation on the human heart and a story so gripping you can scarcely bear to put it down."—San Francisco Chronicle

"A most un-English writer, whose sensibility began with Kafka and the Russian novelists, [Gordimer] needs nobody to point out to her that the territory of Dostoevsky's Russia—a land tortured by vast injustice and cruelty, haunted by millenary dreams of violence and redemption—overlaps with the apartheid South Africa in which she lived and wrote for most of her life . . . There are a lot of separate strands in The House Gun, and they are very different in texture. One of them is about freedom and the search for freedom, and the extremes to which that search can lead. . . . But there are also large non-fictional strands in the book . . . There is a reflection on the death penalty . . . There is a highly detailed description of the Constitutional Court in session, of the evidence that it hears, and even of the physical appearance of the judges . . . it feels like the reworking of pages from the notebook of an excellent journalist, an observer sitting for the first time on the Court's press benches and recording the historic scene as human rights are finally incorporated into South African supreme law."—Neal Ascherson, The New York Review of Books

"As complex, compelling, and memorable an account of race and class as any of her earlier works . . . A brilliant, beautifully crafted novel of betrayal."—The Dallas Morning News

"The House Gun is like a well-cut diamond. Its many angles and planes catch the light and illuminate understanding, laying bare the emotions of a people caught in the transition from one world to another."—The Orlando Sentinel

"Gordimer is a major literary figure, working at the peak of her craft . . . The House Gun is an awe-inspiring work."—The Cincinnati News and Observer

"Exquisitely drawn . . . Passionately intelligent, it's more complicated than any detective story. Complicated not so much by plot, it's about the mystery of the human heart, the ‘mystery that is the other individual, even the one you have created out of your own flesh.'"—Bob Minzesheimer, USA Today

"A passionately schematic moral anatomy of a murder. Gordimer's resolutely small cast of characters embodies uncomfortable social truths about contemporary South Africa—truths challenged in the course of the novel, which finally seems more universal than local. 'This is not a detective story,' declares the writer quite early, but rather an opportunity to explore complex human contradictions regarding race, sexual identity, social relations, and ethical authority. The book's drawback, despite its admirably close-packed construction and battering power of observation, is that Gordimer's characters are more like symbols than real people; they serve her rhetorical ends too summarily. The Lindgards are liberal white pillars of the less-racist-than-it-used-to-be South African establishment—Harald an insurance executive, Claudia a doctor—whose 27-year-old architect son Duncan shoots and kills his friend Carl Jesperson after stumbling upon Jesperson having sex with Duncan's girlfriend. But the story is only nominally about Duncan's motives. Instead, Gordimer puts us on the planet of his parents' panic as they realize for the first time that 'violence is the common hell of all who are associated with it.' The Lindgards are temporarily robbed of their privilege and left to cope with what little can remain of their moral confidence. Their previously untested social prestige, for instance, had meant they 'had never been to a black man's home' before Hamilton Motsamai, now their son's lawyer, welcomes them to his. But so much else in their lives has also gone unquestioned, and Gordimer concentrates on showing how one destructive event canforcibly clarify whatever has led up to it. Her narrative remove makes her insights seem absolute, not conditional. Yet her "objective" stance as an insider arbiter also lifts her high above the hell she's evoking, with the result that hell can seem a rather too orchestrated and orderly place. A Dostoyevskian look at crime and punishment, although a far remove from the way the earlier master did it."—Kirkus

Excerpt from The House Gun by Nadine Gordimer. Copyright © 1998 by Felix Licensing, B.V. To be published in January, 1998 by Farrar, Straus & Giroux, LLC. All rights reserved.

Nadine Gordimer (1923-2014) was a Nobel Prize winner whose novels include the Booker Prize-winning The Conservationist, Commonwealth Writers’ Prize-winning The Pickup, and No Time Like the Present. Gordimer’s short story collections include Loot and Jump and Other Stories. She also published literary and political essay collections such as Living in Hope and History.

Gordimer was a vice president of PEN International and an executive member of the Congress of South African Writers. She was a fellow of the Royal Society of Literature in Great Britain and a Commandeur of l’Ordre des Arts et des Lettres (France).