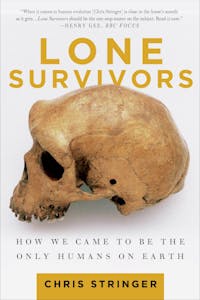 In this engaging work of science, world-renowned paleoanthropologist Chris Stringer sets out a new theory of humanity's origin, challenging both the multiregionalists (who hold that modern humans developed from ancient ancestors in different parts of the world) and his own "out of Africa" theory, which maintains that humans emerged rapidly in one small part of Africa and then spread to replace all other humans within and outside the continent. Stringer's new theory, based on archaeological and genetic evidence, holds that distinct humans coexisted and competed across the African continent—exchanging genes, tools, and behavioral strategies.

Stringer draws on analyses of old and new fossils from around the world, DNA studies of Neanderthals (using the full genome map) and other species, and recent archaeological digs to unveil his new theory. He shows how the most sensational recent fossil findings fit with his model, and he questions previous concepts (including his own) of modernity and how it evolved.

"If you want an engaging read about the Out of Africa theory for modern humans, Lone Survivors by paleoanthropologist Chris Stringer is for you. Stringer's stimulating writing will carry you from the beginning to the end of this important book."—Don Johanson, Founding Director, Institute of Human Origins, Arizona State University

"Lone Survivors is a magnificent achievement: rich, informative, and comprehensive. Simply the best book on current state-of-the-art human evolutionary studies I have read. I recommend it as the first step for anyone entering this field—and for those who have already taken their first steps, it provides the overview we would all like to have. The book makes a messy field neat and much easier to navigate in. Bravo!"—Peter C. Kjaergaard, Professor and Director of Interdisciplinary Evolutionary Studies, Aarhus University, Denmark

"The book has a near-conversational tone, and the result is rather like having a long and interesting conversation with an expert and interesting raconteur. This volume will be essential for readers interested in the history of paleoanthropology and recent research on the evolution of Homo sapiens."—John J. Shea, The Quarterly Review of Biology

"Combining the thrill of a novel with a remarkable depth of perspective, the book offers a panorama of recent developments in paleoanthropology by drawing together this broad range of viewpoints, Stringer's original ideas will open avenues for those who deal with genes, fossils, or artifacts . . . refreshingly politically incorrect . . . Stringer wisely states in his conclusion that science is not about being right or wrong, but about gradually approaching the truth of the natural world. Although he has complied with this philosophy throughout his many writings, one must admit that he has been mostly right from the beginning."—Jean-Jacques Hublin, Nature

"[This is] the right book by the right author at the right time. It highlights just how many tantalising discoveries and analyticical advances have enriched the field in recent years, and folds them into an appropriately comprehensive, generous and nuanced reflection."—Marek Kohn, Literary Review

"To follow the dramatic announcements that will be appearing . . . from now on concerning new fossil finds and detailed genetic knowledge . . . you wiil need a primer to make sense of the story so far. Here is that book."—The Guardian (UK)

"Stringer's account is made all the more impressive by his having been involved in so many ground-breaking projects . . . He charts the advances in our understanding of the fossil, archeological, and genetic evidence in turn, before bringing it all together in the most up-to-date synthesis available."—London Review of Books (UK)

"When it comes to human evolution [Chris Stringer] is as close to the horse's mouth as it gets . . . Lone Survivors should be the one-stop source on the subject. Read it now."—Dr. Henry Gee, BBC Focus

"Stringer points out that most scientists agree that our first hominid ancestors appeared in Africa 5 million years ago; many species evolved, and a few wandered north about 2 million years ago. Where Homo sapiens originated and how it came out on top remains a matter of intense debate, but Stringer marshals the latest evidence and concludes that his own opinion is correct: Modern humans appeared in a small area of Africa about 200,000 years ago and then moved across the world exchanging genes, tools and behavior with rival human species before supplanting them. Besides trying to make sense of headline-producing fossil and archeological discoveries, the author explains dazzling advances that have solved many problems: precise techniques for dating, DNA studies, isotope analysis to determine an ancient species' diet and travels, CT scans to reveal hidden and even microscopic details and geometric morphometrics and stereo lithography to re-create, manipulate and compare skulls and other structures . . . readers seeking to advance beyond the usual flamboyant field researchers will enjoy this intense, detailed account of what the world's anthropologists are doing, thinking and quarreling about."—Kirkus Reviews

"[Stringer] reviews recent research from a wide breadth of fields to give readers an up-to-date view of the state of human prehistory. In doing so, he also shows how science works to adapt and update theories as improved techniques bring new facts to light and new evidence is found in the field. Stringer explains many state-of-the-art techniques for studying fossils (e.g., uranium-series dating, electron spin resonance, computerized tomography, DNA sequencing) and combines these findings with current research in the areas of archaeology, evolutionary anthropology, epigenetics, and environmental studies to provide a well-rounded view of how the Homo genus evolved. Stringer, a leading proponent of the recent single-origin hypothesis or Out of Africa theory, continues to support that model with some modifications. A broad and current review of the subject makes this an essential book for anyone interested in psychology, sociology, anthropology, human evolution, or the scientific process."—Margaret Henderson, Virginia Commonwealth University Library, Richmond, Virginia, Library Journal

"Stringer explores . . . the major trends in human evolutionary theory since Darwin's time, following the pendulum of scientific opinion as it swings from multiregionalism—the idea that humans evolved through various phases around the globe, with no place serving as a particular origin—to recent African origin theory, and back. Though a prominent out of Africa proponent, Stringer refines his earlier ideas, still focusing on an African beginning, but investigating the possibility that humans interbred with Neanderthals and other ancient humans. The book digs into fossil finds, advanced dating methods, and genetic tools, and shows how experts can deduce so much about our millennia-dead ancestors."—Publishers Weekly


It is barely 150 years since Charles Darwin and Alfred Russel Wallace presented their ideas on evolution to the world. A year later, in 1859, Darwin was to publish one of the most famous of all...

Chris Stringer Interviewed on The Takeaway.

CHRIS STRINGER is the author of The Complete World of Human Evolution, Homo britannicus, and more than two hundred books and papers on the subject of human evolution. One of the world's foremost paleoanthropologists, he is a researcher at the Natural History Museum in London and a Fellow of the Royal Society. He has three children and lives in Sussex and London.