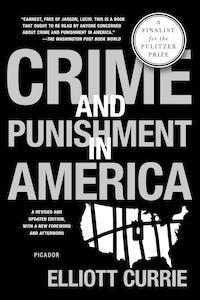 When Crime and Punishment in America was first published in 1998, the national incarceration rate had doubled in just over a decade, and yet the United States remained—by an overwhelming margin—the most violent industrialized society in the world.

Today, there are several hundred thousand more inmates in the penal system, yet violence remains endemic in many American communities. In this groundbreaking and revelatory work, renowned criminologist Elliott Currie offers a vivid critique of our nation's prison policies and turns his penetrating eye toward recent developments in criminal justice, showing us the path to a more peaceable and just society. Cogent, compelling, and grounded in years of original research, this newly revised edition of Crime and Punishment in America will continue to frame the way we think about imprisonment for years to come.

"If legislators and citizens absorbed Currie's sound policy alternatives, they might stop lurching down the path he shows is departing more and more 'from both science and common sense.'"—Daniel J. Rothman, The New York Times Book Review

"Currie exposes the faulty reasoning, dishonest statistics, and propaganda used to justify America's harsh, expensive, and misdirected criminal justice policies. He proposes sane strategies that would reduce violent crime without bankrupting the nation, ripping up its social fabric, or turning it over to the penal-industrial complex."—Michael B. Katz, author of The Undeserving Poor

"Currie examines the problem of criminal violence with intelligence and a great deal of carefully sifted information. He argues persuasively that a policy of massive incarceration has had only a very modest impact on crime rates and predicts diminishing returns in the future. He shows how huge expenditures in prisons have meant far less money for programs that would make far deeper inroads into rates of criminal violence and would humanize American society as ever-rising rates of incarceration surely will not. His sane and optimistic analysis demands our attention."—Frances Fox Piven, author of Regulating the Poor

"Currie's Crime and Punishment in America presents a dizzying array of research and statistics that demythologizes the criminal justice policies that have dominated the national debate over the past two decades. He offers compelling evidence against the charge that the justice system is extremely lenient. The assertion that increased incarceration is cost effective is convincingly disproved."—Barrie Krisberg, The Los Angeles Times Sunday Book Review

"Accessible and astute, a must-read. Currie's analysis sorts through reams of statistics to debunk many of the myths and much of the hysteria that surrounds the discussion."—San Jose Mercury News

"Earnest, free of jargon, lucid. A book that ought to be read by anyone concerned about crime and punishment in America."—The Washington Post Book World

"Currie first examines the magnitude of the nation's three-decade 'experiment' in rapid expansion of incarceration, and serious flaws in current arguments for further proliferation of prisons and ever more brutal treatment of prisoners. He then explores alternative approaches: social supports and opportunities aimed at the most vulnerable Americans; and 'refocusing our criminal-justice system . . . toward preventing harm and reintegrating offenders into the community.' As in the early '70s, Currie's conclusion urges, the U.S. stands at a crossroads: we must choose between a balanced approach that recognizes that criminal justice improvements must be matched by improved equity and social justice, and the failed approach justified by an increasingly open social Darwinism over the past three decades—simply locking up ever more of our fellow citizens. An eloquent dissection of a highly controversial issue."—Mary Carroll, Booklist


Just as violent crime has become part of the accepted backdrop of life in the United States, so too has the growth of the system we've established to contain it. A huge and constantly expanding...

Elliott Currie is the author of Confronting Crime, Reckoning, and The Road to Whatever. An internationally recognized authority on youth and crime, he is a professor of criminology, law, and society at the University of California, Irvine.