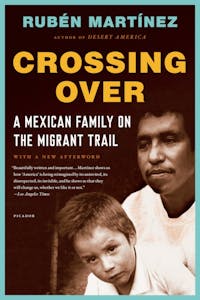 The U.S.-Mexican border is one of the most permeable boundaries in the world. Even as the United States deploys billions of dollars and a vast arsenal to "hold the line," the border is breached daily by Mexicans in search of work. Yet the migrant gambit is perilous. Thousands die crossing the border, and those who reach "the other side" are branded illegals, undocumented and unprotected.

In Crossing Over, the award-winning journalist Rubén Martínez puts a human face on the phenomenon, following the exodus of the Chávez clan, an extended Mexican family with the grim distinction of having lost three sons in a tragic border incident. He charts the migrants' progress from their small south-Mexican town of Cherán through the harrowing underground railroad to the tomato farms of Missouri, the strawberry fields of California, and the slaughterhouses of Wisconsin. He reveals the effects of emigration on the family members left behind and offers a powerful portrait of migrant culture, an exchange that deposits hip-hop in Indian villages while bringing Mexican pop to the northern plains. Far from joining the melting pot, Martínez argues, the migrants—as many as seven million in the United States—are spawning a new culture that will alter both countries, as Latin America and the United States come increasingly to resemble each other.

"Martínez's portrait is a rich counterpoint to the simple patterns a demographer might draw."—The New York Times Book Review

"Martínez is one of the brightest voices of a new generation of Hispanic Southern Californian writers. He manages to be both graceful and impassioned; his obsessions with multiculturalism, with the nature of identity, and with popular culture are precisely the subjects with which intelligent people today must grapple."—The Washington Post

"To read Crossing Over is to read not the history of the foreign other, but to read the story of America, to understand the dynamic that renews the strength and hope of the American Dream even as it reshapes it . . . He has depicted a deep, enduring commonality that may change the way we understand immigration."—Chicago Tribune

"Martínez spent more than two years on the migrant trail, and delivers an insightful, well-crafted look at the world of Mexican migrants, their failures and successes, and how they're changing the cultural landscape in two countries . . . What separates his book from others that have dealt with the crossing-the-border theme is the ground that he covers to reveal the depth of the migrant's psyche and character. He goes beyond the Southwest, where the bulk of the nation's 20 million people of Mexican descent live, and follows the migrant trail to new frontiers in places in the South and Midwest, places that were largely unaffected by immigration until the 1990s but now bear the traits of new Ellis Islands."—Leonel Sanchez, San Diego Union-Tribune

"It is an intimate and tender story of family ties, the survival of traditions and an up-close travel narrative of how brutal and miraculous illegal immigration can be."—San Francisco Chronicle

"Blending meticulous research with passionate prose, Martínez paints a vivid and often grim picture of Cherán and the families torn between home and hunger for something better."—The Boston Globe

"This Los Angeles-born-and-bred grandson of Mexican immigrants brings to his subject personal passion and a knowing eye for the nuances of style and feeling, which make this a very valuable book."—Newsday

"Through these beautifully written and important stories, Martínez shows us how 'America' is being re-imagined by its uninvited, its disrespected, its invisible, and he shows us that they will change us, whether we like it or not."—Yxta Maya Murray, Loyola Law School, Los Angeles Times

"This is a deeply affecting celebration of the ordinary heroism of migrant families. It is also a brilliant reflection of the struggle to preserve fundamental solidarities amidst the pandemonium of globalization. Martínez writes with moral clarity and razor-sharp wit—no wonder he is setting off sensors all along the border."—Mike Davis, author of Ecology of Fear

"In blistering, accurate prose, Rubén Martínez lances the wound that is the Mexican migrant experience. Uncompromising in its intensity, Crossing Over is a great testimony to life on this blessed, complex, and turbulent continent. We who live on La Frontera look for books like this the way we wait for rain."—Denise Chávez, author of Loving Pedro Infante

"Crossing Over is dark, brutal—and brilliant. Rubén Martínez gets under the skin. He takes us back and forth across many borders and reveals points of view that will startle both Mexicans and Americans. All the people who are making the decisions about the border should read this sharp, gritty, true book. No other journalist could have written it; Martínez is truly our coyote."—Sandra Cisneros, author of The House on Mango Street

"In the tradition of Oscar Lewis's The Children of Sanchez and James Agee's Let Us Now Praise Famous Men, Rubén Martínez takes us on that quintessential and often tragic journey from the promise of America to the reality it offers. By putting a human face on the experience, Martínez gives us a thorough and thrilling portrait of two countries, two cultures, and a family caught between them. Meticulously researched and passionately written, Crossing Over will become a seminal work on the Mexican migrant experience and on the border where the two Americas, north and south, are still discovering each other."—Julia Alvarez, author of In the Time of the Butterflies

"Crossing Over is one of the few truly great border books ever written. Crossing Over is sure to become an instant and enduring classic."—Luis Alberto Urrea, author of Across the Wire

"This is a book that George Orwell might have written. What begins as a work of journalism about people at the borders of our lives, ends up, like a work of literature, forcing us to wonder about ourselves."—Richard Rodriguez, author of Days of Obligation: An Argument with My Mexican Father

"Three of the Chavez brothers died in a border incident; Martínez goes to their small town in Michoacan and describes their funeral. But other family members have not given up hope, and Martínez documents what they find across the border, in Arkansas, Missouri, California, and Wisconsin. This is one of the strengths of Martínez's narrative: so much of the literature about Mexican immigrants, legal and undocumented, focuses on the Southwest, it's all too easy to forget that midwestern slaughterhouses and orchards also depend on immigrant labor. Martínez captures the terrors and small victories of the immigrants' journey, as well as the inexorable reciprocal flow of culture between a Mexican village and the new homes the immigrants find in el Norte."—Mary Carroll, Booklist

"A thoughtful politically charged narrative of travel in a little-known but much discussed American subculture. [Martínez] resists the temptation to moralize, instead writing plainly—but with obvious sympathy—for people moved by economic disaster to flee their homes for an uncertain new country that often seems to hate but that needs them all the same. First-rate reporting on an important, controversial subject."—Kirkus Reviews

"As he relates the passionate story of this migrant family on its never-ending search for identity, Martínez identifies components that contribute to the culture swirl of the migrant experience and predicts the creation of a multiracial future."—Library Journal

Rubén Martínez, an Emmy Award-winning journalist and poet, is associate editor at Pacific News Service and a correspondent for PBS's religion and ethics news weekly. Author of The Other Side, he has appeared as a commentator on Nightline, Frontline, and CNN. He lives in Los Angeles.