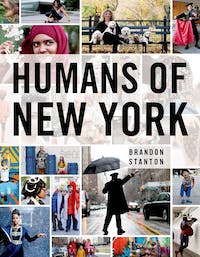 Now an instant #1 New York Times bestseller, Humans of New York began in the summer of 2010, when photographer Brandon Stanton set out to create a photographic census of New York City. Armed with his camera, he began crisscrossing the city, covering thousands of miles on foot, all in an attempt to capture New Yorkers and their stories. The result of these efforts was a vibrant blog he called "Humans of New York," in which his photos were featured alongside quotes and anecdotes.

Surprising and moving, printed in a beautiful full-color, hardbound edition, Humans of New York is a celebration of individuality and a tribute to the spirit of the city.

With 400 full-color photos and a distinctive vellum jacket

“Visually arresting and disarmingly deep . . . The photographs in this volume, some of which have never been published before, capture the city's inhabitants with a commendable eye for demographic diversity and everyday street fashion. But it's Stanton's interviews with his subjects, usually excerpted from their rawest moments, that are the most captivating as they highlight both the hardship and the little victories of an often-unforgiving city.”—The Atlantic

“[A] lovely collection of photos and essays . . . The images are gorgeous, and the effect is like walking through a version of our city where startlingly honest thought bubbles appear over everyone's heads.”—New York Magazine

“Some street photographers hide behind phone booths like paparazzi so their subject won't be aware of their presence, but for Stanton it's precisely that awkward interaction, the tearing down of the wall between strangers, that he covets.”—The Huffington Post

“There's no judgment, just observation and in many cases reverence, making for an inspiring reading and visual experience.”—Publishers Weekly (starred review)

A #1 New York Times bestseller. Based on the blog with nearly a million loyal fans, a beautiful, heartfelt, funny, and inspiring collection of photographs capturing the spirit of a city.

BRANDON STANTON studied at the University of Georgia and worked as a bond trader in Chicago before founding Humans of New York in the summer of 2010. He has appeared on The Today Show and the BBC, has been featured in The Wall Street Journal, and his photos have appeared at Vogue.com and TheAtlantic.com. David Karp, the founder of Tumblr, called Humans of New York his favorite Tumblr blog. Stanton lives in Brooklyn, New York.