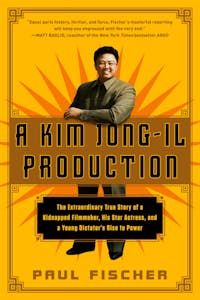 Before becoming the world’s most notorious dictator, Kim Jong-Il ran North Korea’s Ministry for Propaganda and all its film studios. Underwhelmed by the pool of talent available to him he took drastic steps, ordering the kidnap of Choi Eun-Hee (Madame Choi)—South Korea’s most famous actress—and her ex-husband Shin Sang-Ok, the country’s most famous filmmaker. But as Madame Choi and Shin Shang-Ok begin to make North Korea’s greatest films, they hatch a plan of escape worthy of a blockbuster Hollywood ending. A Kim Jong-Il Production is that rarest of books: a wildly entertaining, cunningly told story that offers a rare glimpse into a nation still wrapped in mystery.

“Gripping . . . A Kim Jong-Il Production tells the absurd, harrowing, and true story of Choi and Shin's ordeal, which reveals the importance of film as propaganda to the North Korean regime.”—Esquire

“Paul Fischer's book A Kim Jong-Il Production is a highly illuminating deep dive on the middle Kim's cinematic obsessions and the film arms race between the two Koreas.”—The Washington Post

“The 1978 abductions of the South Korean actress Choi-Eun-He and her ex-husband, the director Shin Sang-Ok, in Hong Kong is the true crime at the center of Paul Fischer's gripping and surprisingly timely new book.”—The New York Times

A Photograph on the Blue House Lawn

On May 16, 1962, Shin Sang-Ok was standing at the center of a party at the South Korean Presidential Residence. He was the talk of...

PAUL FISCHER is a film producer who studied social sciences at the Institut d'Etudes Politiques in Paris and film at the University of Southern California and the New York Film Academy. Paul's first feature film, the documentary Radioman, won the Grand Jury Prize at the Doc NYC film festival and was released to critical and commercial acclaim. A Kim Jong-Il Production is his first book.