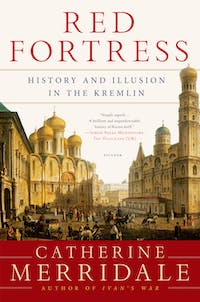 The Kremlin is the heart of the Russian state, its very name a byword for enduring power. From Ivan the Terrible to Vladimir Putin, generations of Russian leaders have sought to use the Kremlin to legitimize their vision of statehood. To this day, its red stars and golden crosses blazing side by side, the Kremlin fulfills a centuries-old role: linking the country's present to its distant past and proclaiming the eternal continuity of the Russian state.

Drawing on a dazzling array of sources from unseen archives and rare collections, renowned historian Catherine Merridale traces the full history of this enigmatic compound of palaces and cathedrals, whose blood-red walls have witnessed more than eight hundred years of political drama and extraordinary violence. And with the Kremlin as a unique lens, Red Fortress brings into focus the evolution of Russia's culture and the meaning of its politics.

"Merridale's extraordinary history of the red fortress mixes politics, history, architecture and biography to lay bare the secret heart of Russia's history . . . It is a delight to read, with pithy pen-portraits, poignant vignettes and mordant summaries of the twists and turns of fate and fortune . . . Merridale does a brilliant job of piecing together the clues from the past and evading the constraints of the present."-The Wall Street Journal

"One of the best popular histories of Russia in any language . . . Merridale's stories flow naturally, she has a superb eye for detail and the telling fact, and she is not afraid to tell us just what she thinks . . . The Kremlin becomes in her hands the narrative thread that knits together the disjointed story of Russia and the Russians. As a literary device, this works marvelously."-Times Literary Supplement

"A splendidly rich portrait of an exotic and puzzling redoubt . . . Vivid and meticulous . . . Merridale is a historian by training, but she has a detective's nose and a novelist's way with words. Her eyes and ears are as sharp as her pen."-The Economist

"Catherine Merridale's Red Fortress is a tour de force, as readable as it is extensively researched."-Financial Times

"Red Fortress is much more than just another book about the Kremlin. It is a brilliant meditation on Russian history and the myths with which the Russians have sought to console themselves."-The Observer

"This simply superb chronicle of the Kremlin is really a brilliant and unputdownable history of Russia itself from the early Tsars via Lenin and Stalin to Putin; anyone who wants to understand Russia today will not only learn a lot but will enjoy every page."-Simon Sebag Montefiore, The Telegraph

"An exhilarating psychogeographical study of Moscow's Kremlin will delight many . . . a book of detail and imagination . . . Merridale's book is a brilliant contribution to the 'Xanadu' strand in English literature...an exhilarating journey."-The Guardian

"This unique and stunningly well illustrated book is going to be a definitive study."-Literary Review

"A comprehensive study of Moscow's walled city, for centuries a byword for power, secrecy, and cruelty... Russian visitors and social historians alike will benefit from Merridale's thoroughgoing research and lively writing."-Kirkus Reviews

"A well-done portrait... Merridale does an excellent job of integrating Russia's often tortured, bloody history, the actions of the rulers, and the building and rebuilding of the Kremlin."-Booklist

"An extensive and meticulous journey through Russian history... How have Russia's leaders taken a history that is often either 'difficult, contested, or fragmentary' and melded it to fit the pervading ideology of the day? With thorough research, including rare access to the Kremlin's dusty, permission-only archives, Merridale addresses this question and many more to weave an insightful, fascinating tale."-Publishers Weekly (starred review)

Catherine Merridale is the author of the critically acclaimed Ivan's War: Life and Death in the Red Army, 1939–1945, and Night of Stone: Death and Memory in Twentieth-Century Russia. A professor of contemporary history at Queen Mary University of London, she has also written for The Guardian, the Literary Review, and the London Review of Books, and contributes regularly to broadcasts on BBC radio. She lives in Oxfordshire, England.