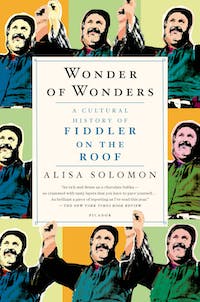 In the half-century since its premiere, Fiddler on the Roof has become a supremely potent cultural landmark, beloved by audiences the world over. Now, in a history as captivating as its subject, award-winning drama critic Alisa Solomon traces how and why the story of Tevye the milkman, the creation of the great Yiddish writer Sholem-Aleichem, was reborn as blockbuster entertainment and a cultural touchstone, not only for Jews and not only in America.

It is first a story of the theater, as Solomon follows Tevye from his humble appearance on the New York Yiddish stage, through his adoption by leftist dramatists as a symbol of oppression, to his Broadway debut and his starring role in a major Hollywood picture. And it is a cultural story, of a show that spoke to the deepest conflicts and desires the world over: the fraying of tradition, generational tension, the loss of roots. Entertaining and original, Wonder of Wonders reveals the profound legacy of a show about tradition that itself became a tradition.

Glenn Beck was welling up as he neared the conclusion of his Restoring Courage rally in Jerusalem in August 2011. The conservative, conspiracy-mongering talk show host...

Alisa Solomon discusses 'Wonder of Wonders: A Cultural History of Fiddler on the Roof' on WNYC's Soundcheck.

Alisa Solomon teaches at Columbia University's Graduate School of Journalism, where she directs the Arts & Culture concentration in the MA program. A theater critic and general reporter for The Village Voice from 1983 to 2004, she has also contributed to The New York Times, The Nation, Tablet, The Forward, and other publications. Her first book, Re-Dressing the Canon: Essays on Theater and Gender, won the George Jean Nathan Award for Dramatic Criticism. She lives in New York City.