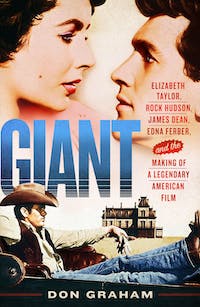 Featuring James Dean, Rock Hudson, and Elizabeth Taylor, Giant is a film of fame and materialism, based around the discovery of oil at Spindletop and the establishment of the King Ranch of south Texas. Isolating his star cast in the wilds of West Texas, director George Stevens brought together a volatile mix of egos, insecurities, sexual proclivities, and talent. Stevens knew he was overwhelmed with Hudson’s promiscuity, Taylor’s diva-dom, and Dean’s egotistical eccentricity. Yet he coaxed performances out of them that made cinematic history, winning Stevens the Academy Award for Best Director and garnering nine other nominations, including a nomination for Best Actor for James Dean, who died before the film was finished.

In this compelling and impeccably researched narrative history of the making of the film, Don Graham chronicles the stories of Stevens, whose trauma in World War II intensified his ambition to make films that told the story of America; Edna Ferber, a considerable literary celebrity, who meets her match in the imposing Robert Kleberg, proprietor of the vast King Ranch; and Glenn McCarthy, an American oil tycoon and Errol Flynn lookalike with a taste for Hollywood. Drawing on archival sources, Graham’s Giant is a comprehensive study of the film’s production that depicts how reality became fiction and fiction became cinema.

“Don Graham, long a keen student of Texas literature, has given us a brilliant study of a classic American film.”—Larry McMurtry, The New York Times and USA Today bestselling author of The Last Kind Words Saloon

“Don Graham goes far behind the scenes to deftly capture the fragile egos and sexual misadventures of the legendary cast, the extraordinary determination of Stevens, and the reaction of Texans who warily embraced a cinematic self-portrait they found both troubling and irresistible.”—Glenn Frankel, Pulitzer Prize-winning journalist and author of The Searchers and High Noon

“Some films are so vital they become part of American history. Giant is one of them. Don Graham shows us how a volatile mix of some of Hollywood’s biggest, most troubled, personalities—Elizabeth Taylor, Rock Hudson, the doomed James Dean—came together under the brilliant direction of George Stevens to create an epic that rivals Texas in size, scope, and sheer impact. With insight and wit, Graham gives us a highly entertaining saga of how movies are made and why they become iconic.”—Nancy Schoenberger, author of the critically acclaimed Dangerous Muse: The Life of Lady Caroline Blackwood and Wayne and Ford: The Films, the Friendship, and the Forging of an American Hero

“Giant is a page-turning tale of giant talents and egos toiling in a remote Texas location with the legendary director George Stevens to create a classic in American film. Especially Dean is poignantly portrayed as a tortured young man whose career and life flamed out much too soon. Essential reading for every fan of the silver screen.”—Tom Clavin, The New York Times bestselling author of Dodge City

“A noted authority on all things Texas, Graham turns his attention to film with this authoritative tale of 'Big Texas Oil' and the epic movie Giant . . . A delightful work of film/cultural history for movie fans.”—Kirkus Reviews

Don Graham, whom the Dallas Morning News called “Our premier scholar and critic on Texas literature, films and pop culture,” was J. Frank Dobie Regents Professor of English at the University of Texas at Austin. He was also a writer-at-large with Texas Monthly magazine. He received the Carr P. Collins Prize for Best Nonfiction Book of the Year, awarded by the Texas Institute of Letters, and served as that organization’s president. Don was the author of Kings of Texas and Giant.

Don Graham's Faculty Profile at The University of Texas at Austin