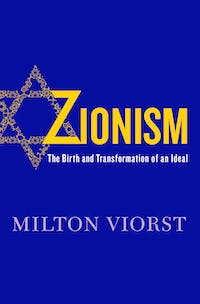 From serving as the Middle East correspondent for The New Yorker to penning articles for The New York Times, Milton Viorst has dedicated his career to studying the Middle East. Now, in this new book, Viorst examines the evolution of Zionism, from its roots by serving as a cultural refuge for Europe's Jews, to the cover it provides today for Israel's exercise of control over millions of Arabs in occupied territories.

Beginning with the shattering of the traditional Jewish society during the Enlightenment, Viorst covers the recent history of the Jews, from the spread of Jewish Emancipation during the French Revolution Era to the rise of the exclusionary anti-Semitism that overwhelmed Europe in the late nineteenth century. Viorst examines how Zionism was born and follows its development through the lives and ideas of its dominant leaders, who all held only one tenet in common: that Jews, for the first time in two millennia, must determine their own destiny to save themselves. But, in regards to creating a Jewish state with a military that dominates the region, Viorst argues that Israel has squandered the goodwill it enjoyed at its founding, and thus the country has put its own future on very uncertain footing.

With the expertise and knowledge garnered from decades of studying this contentious region, Milton Viorst deftly exposes the risks that Israel faces today.

"Viorst’s greatest lesson is that the Zionist movement is anything but singular in character. A well-written, balanced, and intriguing reference."—Kirkus Reviews

On August 29, 1897, in the city of Basel in Switzerland, Theodor Herzl announced to the delegates at...

MILTON VIORST was the Middle East correspondent for The New Yorker and has written for the New York Times Magazine, the Atlantic, Middle East Policy, Ha'Aretz, The Nation, the Washington Post, the L.A. Times, and the Wall Street Journal. Viorst's books on the Middle East include In The Shadow of the Prophet, Storm from the East, and What Shall I Do with This People? He has served as a Ferris Professor at Princeton. Viorst lives in Washington, D.C. with his wife, the poet Judith Viorst.