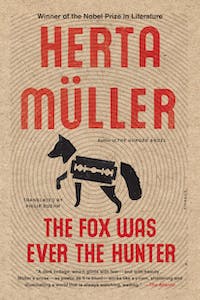 Romania—the last months of the Ceausescu regime. Adina is a young schoolteacher. Paul is a musician. Clara works in a wire factory. Pavel is Clara’s lover. But one of them works for the secret police and is reporting on the rest of the group.

One day Adina returns home to discover that her fox fur rug has had its tail cut off. On another occasion it’s the hindleg. Then a foreleg. The mutilated fur is a sign that she is being tracked by the secret police—the fox was ever the hunter. Images of photographic precision combine into a kaleidoscope of terror as Adina and her friends struggle to keep mind and body intact in a world pervaded by complicity and permeated with fear, where it’s hard to tell victim from perpetrator. And once again, Herta Müller uses language that displays the “concentration of poetry and the frankness of prose”—as the Swedish Academy noted upon awarding her the Nobel Prize—to create a hauntingly cinematic portrayal of the corruption of the soul under totalitarianism.

"For Müller, the longevity of things is a fascination of great urgency. In The Fox Was Ever the Hunter, her latest work to be published in English, this concern takes on an encyclopedic, yet characteristically poetic, bent. Set during the final months of Ceausescu’s rule, the novel, deftly rendered by Müller’s longtime translator Philip Boehm, tells the story of two close friends, Adina and Clara, their alternate survival methods in the regime and the things that separate their fates . . . Literature is often at its best, and most urgent, when it is a survival tactic. In her writing, Müller inches closer to narrowing the gap between people and things, between life and language. For that reason, her sparse prose often resembles poetry . . . Originally published in her native German in 1992, The Fox Was Ever the Hunter is a haunting portrayal of the secret lives of people and things during the last breaths of an obliterating regime."—Linda Kinstler, The Washington Post

"The Fox Was Ever the Hunter is itself a collage of images, stories and fragments of forbidden songs. Müller arranges them in such a way that the reader gets a sense of how terrifying and rife with betrayal life in Romania was during the end of ­Ceausescu’s regime . . . The reader understands that each and every one of Müller’s stories, every flight of luscious language and every brutal fact, has been necessary in depicting a society torn to pieces and tasked, with the curtains finally open and the light streaming in, with putting those pieces back together to make sense of it all."—Vendela Vida, The New York Times Book Review

"An air of Soviet-era menace engulfs The Fox Was Ever the Hunter, Herta Müller's remarkable novel—newly released in English and given a lucid translation by Philip Boehm . . . The Fox,published originally in German in 1992, is one of Müller's early works, and it draws on what she suffered while clenched in the jaws of one of history's most notorious dictatorships. But she infuses characters and events with surreal elements and heightened levels of metaphor that make this much more than a roman à clef . . . Her images come at us with a stark brutality; outside the town sheep graze, so famished by the end of summer that they 'lick the walls' of a slaughterhouse."—Jean Zimmerman, NPR

“Müller slowly builds suspense as she draws on memories of the stark landscape, the personal betrayals, the state brutality, the daily dread and tedium. Her prose—as poetic as it is blunt—works like a prism, shattering and illuminating a world that is always watching, waiting.”—Ann Hulbert, The Atlantic

“Perhaps no author has captured the surreal textures of Iron Curtain paranoia quite like Herta Müller.”—Vogue (Best Books of the Month)

“This newly translated 1992 novel set during the twilight of Romania’s Ceausescu regime makes vivid the persecution Müller and others suffered . . . She uses the distinctive language honoured by the Nobel Committee for its ‘concentration of poetry and the frankness of prose’ to give a powerful sense of the toxic atmosphere of a totalitarian regime.”—BBC Culture

“Atmospheric, lyrical . . . An essential work of post-Iron Curtain literature and a harrowing portrait of life under suspicion.”—Kirkus Reviews (starred review)

“Offers a bleak and poetic portrait of Romanian village life in the final days of the Ceausescu regime, where deprivation is ubiquitous, cruelty is standard, and spying is a survival skill . . . Thickly lyrical and sometimes downright hallucinatory . . . few descriptions of life under totalitarian rule are as beautifully evocative.”—Booklist (starred review)

The way of the apple worm

The ant is carrying a dead fly three times its size. The ant can’t see the way ahead, it flips the fly around and crawls back. Adina doesn’t want to block...

HERTA MÜLLER is the winner of the 2009 Nobel Prize in Literature, as well as the International IMPAC Dublin Literary Award and the European Literature Prize. She is the author of, among other books, The Hunger Angel and The Land of Green Plums. Born in Romania in 1953, Müller lost her job as a teacher and suffered repeated threats after refusing to cooperate with Ceausescu's secret police. She succeeded in emigrating in 1987 and now lives in Berlin.