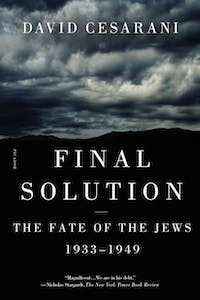 Based on decades of scholarship, documentation newly available from the opening of Soviet archives, declassification of Western intelligence service records, as well as diaries and reports written in the camps, Cesarani provides a sweeping reappraisal that challenges accepted explanations for the anti-Jewish politics of Nazi Germany and the inevitability of the “final solution.” The persecution of the Jews, as Cesarani sees it, was not always the Nazis’ central preoccupation, nor was it inevitable. He shows how, in German-occupied countries, it unfolded erratically, often due to local initiatives.

For Cesarani, war was critical to the Jewish fate. Military failure denied the Germans opportunities to expel Jews into a distant territory and created a crisis of resources that led to the starvation of the ghettos and intensified anti-Jewish measures. Looking at the historical record, he disputes the iconic role of railways and deportation trains. From prisoner diaries, he exposes the extent of sexual violence and abuse of Jewish women and follows the journey of some Jewish prisoners to displaced persons camps. David Cesarani’s Final Solutionis the new standard chronicle of the fate of a heroic people caught in the hell that was Hitler’s Germany.

"This splendid book will serve as a fitting end to his career, but it is an enormous loss that it should have to do so . . . Few if any have traced as well as David Cesarani does here the global skeins of influence, ideas and power on which Jewish fates hung."—The Times Literary Supplement

“A brilliant synthesis and interpretation of the greatest crime of the modern era . . . There is so much of value in this harrowing and extraordinary book that it's hard to encompass in a review . . . There are stories here I didn't know and could scarcely have imagined . . . A book that demands to be read and deserves every historical award going.”—Oliver Kamm, The Times (London)

“This is an elegantly written, honest and plausible account and it deserves to be widely read and reflected upon in a continent where racial and religious prejudice is not as far below the surface as we would like to think. Final Solution is a fitting monument to a fine historian and a fine human being.”—Richard Overy, Literary Review

“A masterpiece . . . dense with fascinating detail, so very well written, and so passionately and compellingly argued.”—Jewish Chronicle

“Traces a path across a vast mass of material—new and old—demonstrating with urgency and verve how Hitler's progress towards mass extermination of the Jews was never pre-planned or preordained . . . utterly convincing . . . One of Cesarani's most remarkable achievements is to reinvigorate this monstrous narrative.”—Sarah Helm, Daily Telegraph

“Lengthy, compelling and devastating . . . a powerful and intensely moving account, drawing on the diaries and letters of those who suffered and died as well as the historical accounts and bland instructions of the remorseless killers.”—Irish Independent

“It is difficult not to be first moved and then overwhelmed by the mere listing of what happened, and in this respect Cesarani has fulfilled his ambition of reclaiming the killings of the Jews for another generation.”—Observer

DAVID CESARANI, OBE, was Research Professor in History at Royal Holloway, University of London and the award-winning author of Becoming Eichmann and Major Farran's Hat. He was awarded the OBE for services to Holocaust Education and advising the British government on the establishment of Holocaust Memorial Day. He died in October 2015.