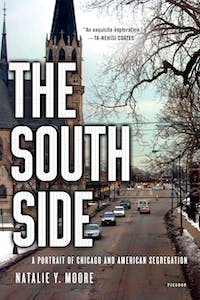 Mayors Richard M. Daley and Rahm Emanuel have touted and promoted Chicago as a "world class city." Yet, swept under the rug is the segregation that compromises Chicago. The Manhattan Institute dubs Chicago as one of the most segregated big cities in the country. Though other cities—including Cleveland, Los Angeles, and Baltimore—can fight over that mantle, it's clear that segregation defines Chicago. And unlike many other major U.S. cities, no one race dominates. Chicago is divided equally into black, white, and Latino, each group clustered in their various turfs.

In this book, Chicago-native Natalie Moore shines a light on contemporary segregation in the South Side of Chicago through reported essays, showing the life of these communities through the stories of people who live in them. The South Side shows the important impact of Chicago's historic segregation—and the ongoing policies that keep it that way.

"Natalie Moore's The South Side is an exquisite exploration of a portion of Chicago that has long embodied the problems and promise of black America. Moore brings her considerable gifts as a journalist and historian to bear along with her knowledge as a South Side native. Moore's latest is essential to anyone attempting to understand race in Chicago, our most American of cities."—Ta-Nehisi Coates, author of Between the World and Me

"Moore has captured the rhythm of Chicago, its beauty and heartbreak, and its racial demons and activist angels with such vibrant prose and personality that she has achieved that rare literary feat: it is both a page-turner and magnum opus. By traveling to the South Side with her, we not only understand why it has been able to produce some of our nation’s most exceptional African American leaders, but also how its ongoing racial segregation haunts and harms the vast majority of Chicagoans today.”—Salamishah Tillet, Associate Professor of English and Africana Studies, University of Pennsylvania

“Thoughtful and clarifying investigation . . . Moore refines our perception of the realities of segregation and the many possible paths to change.”—Booklist

NATALIE Y. MOORE is the South Side bureau reporter for WBEZ, the NPR-member station in Chicago. Before joining WBEZ, she covered Detroit City Council for Detroit News. She worked as an education reporter for the St. Paul Pioneer Press and a reporter for the Associated Press in Jerusalem. Her work has been published in Essence, Black Enterprise, the Chicago Reporter, In These Times, the Chicago Sun-Times and the Chicago Tribune. She was awarded the 21st Century Award from the Chicago Public Library and Foundation in 2017. She lives in Chicago.