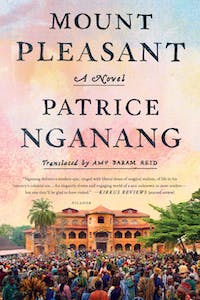 In Cameroon in 1931, Sara is taken from her family and brought to Mount Pleasant as a gift for Sultan Njoya, the Bamum leader cast into exile by French colonialists. Just nine years old and on the verge of becoming one of the sultan's hundreds of wives, Sara's story takes an unexpected turn when she is recognized by Bertha, the slave in charge of training Njoya's brides, as Nebu, the son she lost tragically years before. In Sara's new life as a boy she bears witness to the world of Sultan Njoya—a magical yet declining place of artistic and intellectual minds—and hears the story of the sultan's last days in the Palace of All Dreams and of the sad fate of Nebu, the greatest artist their culture had seen.

Seven decades later, a student returns home to Cameroon to research the place it once was, and she finds Sara, silent for decades, ready to tell her story. In her serpentine tale, a lost kingdom lives again in the compromised intersection between flawed memory, tangled fiction, and faintly discernible truth. In this telling, history is invented anew and transformed—a man awakens from a coma to find the animal kingdom dancing a waltz; a spirit haunts a cocoa plantation; and a sculptor re-creates his lost love in a work of art that challenges the boundary between truth and the ideal. The award-winning novelist Patrice Nganang's lyrical and majestic Mount Pleasant is a resurrection of the world of early twentieth-century Cameroon and an elegy for the men and women swept up in the forces of colonization.

"This complex, elegiac novel, set in twentieth-century Cameroon, centers on Sara, who at the age of nine was taken to Mount Pleasant as a gift for a local sultan. She has been mute ever since, but a timely coincidence persuades her to share her story with the book’s narrator, an American student. In between vivid tales of old Cameroon, Sara takes a turn as the audience; the narrator has researched Sara’s father, a political activist, and uncovered much about a life unknown to his daughter. 'Truth needs to be hidden,' one character muses. 'Or else it’d blind us.'”—The New Yorker

"Patrice Nganang’s dazzling novel [stands] in a league of its own, so different from the great majority of novels by African writers in the past fifty or sixty years."—Charles L. Larson, Counterpunch

"Cameroonian writer Nganang delivers a modern epic, tinged with liberal doses of magical realism, of life in his country's colonial era . . . An elegantly drawn and engaging world of a sort unknown to most readers—but one they'll be glad to have visited."—Kirkus Reviews (starred review)

She was already a boy, Sara was, when she arrived at Mount Pleasant, the royal residence in exile. That is the simple truth of it. She was only...

Patrice Nganang; Translated from the French by Amy Baram Reid

Patrice Nganang was born in Cameroon and is a novelist, a poet, and an essayist. His novel Dog Days recieved the Prix Marguerite Yourcenar and the Grand Prix littéraire d’Afrique noire. He is also the author of Mount Pleasant (FSG, 2016) and When the Plums Are Ripe (FSG, 2019). He teaches comparative literature at Stony Brook University.