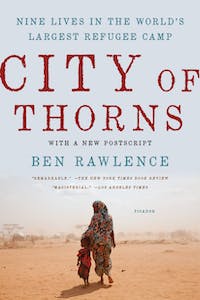 Situated hundreds of miles from any other settlement, deep within the inhospitable desert of northern Kenya where only thorn bushes grow, Dadaab is a city like no other. Its buildings are made from mud, sticks or plastic, its entire economy is grey, and its citizens survive on rations and luck. Over the course of four years, Ben Rawlence became a first-hand witness to a strange and desperate limbo-land, getting to know many of those who have come there seeking sanctuary. Among them are Guled, a former child soldier who lives for football; Nisho, who scrapes an existence by pushing a wheelbarrow and dreaming of riches; Tawane, the indomitable youth leader; and schoolgirl Kheyro, whose future hangs upon her education.

In City of Thorns, Rawlence interweaves the stories of nine individuals to show what life is like in the camp and to sketch the wider political forces that keep the refugees trapped there. Rawlence combines intimate storytelling with broad socio-political investigative journalism, doing for Dadaab what Katherine Boo's Behind the Beautiful Forevers did for the Mumbai slums. Lucid, vivid and illuminating, City of Thorns is an urgent human story with deep international repercussions, brought to life through the people who call Dadaab home.

"[A] remarkable book . . . Like Dadaab itself, the story has no conclusion. Iti is a portrait, beautifully and moving painted. And it is more than that. At a time when newspapers are filled with daily images of refugees arriving in boats on Europe’s shores, when politicians and governments grapple with solutions to migration and erect ever larger walls and fences, it is an important reminder that a vast majority of the world’s refugees never get as far as a boat or a border of the developed world. They remain, like the inhabitants of Dadaab, in an indefinite limbo of penury and fear, unwanted and largely forgotten.”—The New York Times Book Review

“Magisterial . . . We see Dadaab through an accumulation of vivid impressions . . . [The book] moves like a thriller.”—Los Angeles Times

“The most absorbing book in recent memory about life in refugee camps . . . Mr. Rawlence’s major feat is stripping away the anonymity that so often is attached to the word “refugee” by delving deeply into the lives of nine people in the camp. By doing so, he transforms its denizens from faceless victims into three-dimensional human beings. Along the way, Dadaab emerges from the ever-present heat and dust to become much more than a refugee camp. It is a real, if very peculiar, city.”—Howard French, The Wall Street Journal

"In light of the contemporary crisis, City of Thorns serves as a cautionary tale. Rawlence's portrait of nine Dadaab residents offers a stark counterpoint to the rhetoric that too often speaks for refugees . . . This is a vital book at a critical moment in global history."—Minneapolis Star Tribune

“City of Thorns . . . brilliantly details the intimate histories of residents of Dadaab, a massive, United Nations-maintained camp in Kenya for people stuck in legal limbo after escaping from sectarian violence in Somalia.”—Chicago Tribune

"City of Thorns is revelatory read. It is a lesson in politics, geography, economics, and humanity. Ben Rawlence's book will give readers the same insight into Dadaab that Katherine Boo gave readers into Mumbai with her book Beyond the Beautiful Forevers. This is an important book that will open your eyes and your heart.”—Everyday eBook

"[Rawlence] has done a remarkable job, bringing home the reality behind those statistics by telling us what life is really like inside one of those camps . . . Rawlence's description of the camp economy is fascinating and shocking . . . A masterful account. Next time someone refers derisively to a 'bunch of migrants,' get them to read this book."—The Sunday Times (London)

"City of Thorns is a powerful and timely reminder of how unresolved conflicts, from Somalia to Syria, have contributed to the unprecedented global refugee crisis. Ben Rawlence's intimate, vivid portrait of the forgotten refugees in Dadaab is a much needed effort to close the humanity gap between the West and the rest. A must-read."—Kim Ghattas, author of The Secretary: A Journey with Hillary Clinton from Beirut to the Heart of American Power

“City of Thorns is a brilliant if haunting book that reveals just what it means to be numbered among the countless tens of thousands of refugees whose existence has been shattered by conflict, who survive with nothing, cast adrift from tradition and security, obliged to cobble together shadow lives from the detritus of memory and lost dreams. It is at once both an intimate story of redemption and hope, a prayer for the innocent, and a damning universal indictment of all those whose monstrous acts and vainglorious ambitions unleash the dogs of war.”—Wade Davis, author of Into the Silence: The Great War, Mallory, and the Conquest of Everest

“The most important book I've read in a long time. Not only does it make plain modern geopolitics, and what makes a refugee, it holds deeper truths about humanity and the system we have designed to preserve it when all seems lost. I worked in these camps at the height of this crisis. I needed this book. As we face a world with more people displaced from their homes than any ever before, City of Thorns is essential reading.”—Dr. James Maskalyk, author of Six Months in Sudan

“Where once writers made myths, now increasingly it’s the writer’s job to unmake the myths created by modern media. City of Thorns is a clear-eyed account of people living in limbo and a testament both to human frailty and human resilience. By recounting the stories of a few Rawlence sheds light on all the stories of all in the refugees in all the camps that will never be told. As timely as Rachel Carson’s Silent Spring—this book should be required reading.”—Aminatta Forna, author of The Memory of Love

“At a time when West governments are obsessing over migrant flows, City of Thorns offers unique insights into what prompts people to abandon their ancestral homes in the first place and the dreams that send them questing for a better life. Researching this book can't have been easy. Ben Rawlence is to be congratulated not just for his accessible writing style, but for his modesty, pluck and determination.”—Michela Wrong, author of In the Footseps of Mr. Kurtz and Borderlines

“City of Thorns is a brilliant if haunting book that reveals just what it means to be numbered among the countless tens of thousands of refugees whose existence has been shattered by conflict, who survive with nothing, cast adrift from tradition and security, obliged to cobble together shadow lives from the detritus of memory and lost dreams. It is at once both an intimate story of redemption and hope, a prayer for the innocent, and a damning universal indictment of all those whose monstrous acts and vainglorious ambitions unleash the dogs of war.”—Wade Davis, author of Into the Silence: The Great War, Mallory, and the Conquest of Everest

“To us they are just numbers, but refugees, asylum seekers and economic migrants are names, lives, sons, daughters, lovers, people full of hope and grit. In this book Ben Rawlence has given us a complex tapestry of refugee life without romanticising it. It is like a Brueghel picture in words. An eloquent testimony by a writer with heart.”—Yasmin Alibhai-Brown, author of Refusing the Veil and The Settler's Cookbook

"City of Thorns elegantly portrays a place and its people at the very fringes of our society, yet also at the heart of its problems. Written with great integrity and insight, this is an urgent, important book that needs to be read. Through tireless and empathetic reportage Rawlence has worked for 5 years to give Dadaab a voice. Now we should listen."—Owen Sheers, author of I Saw a Man

“Compassionate and powerful, this book gets to the heart of the tragedy of Somalia, and the struggles that face those displaced by war and want in eastern Africa. To better understand the current crisis of migration in our modern world, start here.”—David Anderson, professor of African History at the University of Warwick

“That Rawlence has managed to capture so much of this unlikely city’s chaos and confusion in a narrative that is very nearly impossible to put down is an achievement in reportage that few have matched. Dadaab’s half a million residents could not have asked for a better champion than this researcher for Human Rights Watch, and while the facts and figures he shares are stunning, it is the nine individuals whose stories he focuses on who give the book its heart . . . Comparisons to Katherine Boo’s Behind the Beautiful Forevers (2012) are spot-on. Rawlence has written a book that just might change the world or, at the very least, awaken readers to one criminal forgotten corner of it. A tour de force.”—Booklist (starred review)

“With remarkable intimacy, Rawlence reveals the humanity of these people in crisis who must struggle to survive in the overcrowded camp . . . A significant, timely, and gloomy tale that reveals the human costs of a growing world crisis.”—Kirkus Reviews

“By combining his own experiences with interviews with residents of Dadaab, [Rawlence] makes the human rights crisis-rarely covered in the media-vivid and immediate for readers . . . This is a compelling examination of the tragedy of a place where one 'can only survive . . . by imagining a life elsewhere.'”—Publishers Weekly (starred review)

Ben Rawlence is a former researcher for Human Rights Watch in the horn of Africa. He is the author of City of Thorns and Radio Congo and has written for a wide range of publications, including The Guardian, the London Review of Books, and Prospect. He is the founder and director of Black Mountains College and lives with his family in Wales.

Read Ben Rawlence in the Guardian