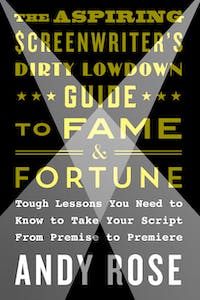 Seeing your name on the silver screen beneath the words "Written By" is a moment most writers only dream of. But for those daring and talented few, brave enough to take their hopes to Hollywood, there are clear and tangible steps to achieve that goal if one knows the path. The Aspiring Screenwriter's Dirty Lowdown Guide to Fame and Fortune provides that path. And Andy Rose has walked it.

With years of experience with every major film studio and network, and dozens of successful screenplays, Andy knows the business. He’s here to debunk the big screen and teach you how to write a blockbuster screenplay and equally important, how to sell it.

Andy has worked with the best: Ron Howard, Tom Hanks, David Geffen, and Jeff Katzenberg to name a few. He has filled this book with real life examples to learn from including contracts, screenplays, treatments, press, and more. For anyone who’s ever dreamed of writing a screenplay, for anyone who’s wondered how to sell one, this is a must read.


What’s your favorite type of movie? The one where the brawny hero leaps into his sleek sports car and races the heinous villain down a treacherous mountain road? Or perhaps it’s an old-fashioned...

Andy Rose teaches screenwriting and television writing at Ohio State University. He has written and/or produced over two dozen projects for almost every major Hollywood studio and network, including the feature films McHale’s Navy and Splash Too; the TV movie The Richest Cat in the World; and the TV shows Life With Louie and UC: Undercover. A WGA member, he has also written numerous articles for MovieMaker Magazine, a national publication on independent filmmaking.