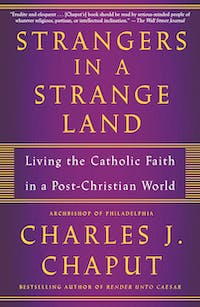 Charles J. Chaput's Strangers in a Strange Land is a vivid critique of American life today, but also an empowering guide to how Christians—and particularly Catholics--can live their faith vigorously, with confidence and hope, in a post-Christian public square

From the author of Living the Catholic Faith and Render Unto Caesar comes a fresh, urgent, and ultimately hopeful treatise on the state of Catholic life and Christian community in the United States.

America today is different in kind, not just in degree, from the past. And this new reality is unlikely to be reversed. The reasons include, but aren't limited to, the decline of a sustaining sense of family and community, the impact of new technologies and economic changes that widen the gulf between rich and poor, diminished religious belief among young people, significant demographic shifts, profound new patterns in sexual behavior and identity, the growth of federal power and its disregard for religious rights, and the growing isolation and elitism of our leadership classes.

But the author gives more than a penetrating diagnosis of the nation’s problems. Archbishop Chaput offers a compelling reflection on the person of Jesus Christ, the nature of the Church, the urgency of radical faith, and the redemptive power of beauty – all in the spirit of Psalm 8 and the enduring words of Irenaeus: “The glory of God is man fully alive."

"Erudite and eloquent . . . his book should be read by serious-minded people of whatever religious, partisan or intellectual inclination."—The Wall Street Journal

"Strangers in a Strange Land is a thought-provoking depiction of a complex contemporary scene. As he fills in his canvas, the author cites a wide variety of sources: magisterial documents and Church Fathers (especially Augustine), historical figures, contemporary ethicists and social scientists, and even poets. Yet throughout the book Chaput is much more than a cultural commentator; he is a pastor instructing souls. Although his message is challenging, the tone is always civil, conversational rather than controversial, and never preachy. In a non-academic way, with remarkable clarity and gentle wit, the author offers remedial lessons in Catholic morality and social doctrine for generations."—Catholic World Report

“Christians often disagree about how that hope shouldmanifest itself in our public and cultural engagements. Chaput’s book is aserious and thoughtful contribution to that crucial question . . . The argument of Strangers islevelheaded and well-researched. The book itself is an inspiring act of publicwitness by one of the American Church’s most prominent bishops. Crisplywritten, it is an accessible read in spite of the author’s learnedness.”—PublicDiscourse

“The intellectual scope of Archbishop Chaput’s book isimpressive . . . “Strangers in a Strange Land” is a tour de force of scholarlythought on the development of Western society . . . For those concerned about thepresent and future of American society, “Strangers in a Strange Land” is amust-read that will leave you thinking and praying long after you’ve finishedit.”—Denver Catholic

"Readers of faith will find much to contemplate in Chaput’s well-argued examples of the state of Christian influence on American culture."—Publishers Weekly

"Chaput is an erudite writer, and his work includes a wide array of quotations and allusions. His observations on Western culture are keen, and while secular-minded readers will find plenty to argue with, his writing will appeal to a wide Christian audience. An optimistic account of the church's future in the midst of a secular age."—Kirkus Reviews

"Well documented, with citations to a wide variety of sources in such areas as literature, philosophy, theology and politics, this book will appeal to traditionally oriented Catholics."—Library Journal

Archbishop Charles J. Chaput, O.F.M. Cap., was named archbishop of Philadelphia in 2011 by Pope Benedict XVI. As a member of the Prairie Band Potawatomi Nation, he was the second Native American to be ordained a bishop in the United States and is the first Native American archbishop. Chaput is the author of two books—Living the Catholic Faith: Rediscovering the Basics and Render Unto Caesar: Serving the Nation by Living Our Catholic Beliefs in Political Life—as well as numerous articles and public talks.