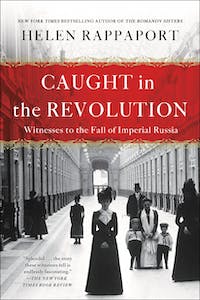 In Caught in the Revolution, Helen Rappaport tells of the outbreak of the Russian Revolution through eye-witness accounts left by foreign nationals who saw the drama unfold.

Between the first revolution in February 1917 and Lenin’s Bolshevik coup in October, Petrograd (the former St Petersburg) was in turmoil—felt nowhere more keenly than on the fashionable Nevsky Prospekt. There, the foreign visitors who filled hotels, clubs, offices and embassies were acutely aware of the chaos breaking out on their doorsteps and beneath their windows.

Among this disparate group were journalists, diplomats, businessmen, bankers, governesses, volunteer nurses and expatriate socialites. Many kept diaries and wrote letters home: from an English nurse who had already survived the sinking of the Titanic; to the black valet of the US Ambassador, far from his native Deep South; to suffragette leader Emmeline Pankhurst, who had come to Petrograd to inspect the indomitable Women’s Death Battalion led by Maria Bochkareva.

Helen Rappaport draws upon this rich trove of material, much of it previously unpublished, to carry us right up to the action—to see, feel and hear the Revolution as it happened to an assortment of individuals who suddenly felt themselves trapped in a "red madhouse."

“By confining herself to foreigners in Russia's capital, Rappaport takes a necessarily narrow slice of revolutionary history. But the story these witnesses tell is endlessly fascinating.”—The New York Times Book Review

“Ms. Rappaport’s account works well as an introduction to a complicated year, but is most valuable for its record of the impressions of those who lived through it.”—The Wall Street Journal

“One of the great strengths of this book is the way in which the unheralded and the celebrated mingle in its pages . . . A mosaic of truth which no fictional one could outdo.”—The Washington Times

“A multifaceted account of the 1917 Russian Revolution . . . gripping and thoroughly researched . . . [Rappaport brings] the streets and spirit of the early-20th-century Petrograd to life on the page.”—Harper’s Bazaar

“Rappaport’s elegantly detailed writing shapes and pulls together excerpts from letters, diaries, articles, and more, quoted throughout, creating the immediacy and energy of history in the making: terrifying, brutal, and unforgettable.”—Booklist

“The most comprehensive compendium to date of non-Russian perspectives across social classes . . . An engaging if challenging look at a country's collapse with worldwide repercussions. Informed general readers will enjoy this glimpse into history; scholars will declare it a definitive study.”—Library Journal (starred)

HELEN RAPPAPORT is the New York Times bestselling author of The Romanov Sisters. She studied Russian at Leeds University and is a specialist in Russian and Victorian history. She lives in West Dorset.