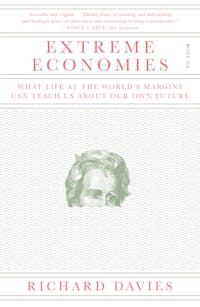 To predict our future, we must look to the extremes. So argues the economist Richard Davies, who takes readers to the margins of the modern economy and beyond in his globe-trotting book. From a prison in rural Louisiana where inmates purchase drugs with prepaid cash cards to the poorest major city on earth, where residents buy clean water in plastic bags, from the world’s first digital state to a prefecture in Japan whose population is the oldest in the world, how these extreme economies function—most often well outside any official oversight—offers a glimpse of the forces that underlie human resilience, drive societies to failure, and will come to shape our collective future.

While the people who inhabit these places have long been dismissed or ignored, Extreme Economies revives a foundational idea from medical science to turn the logic of modern economics on its head, arguing that the outlier economies are the place to learn about our own future. Whether following Punjabi migrants through the lawless Panamanian jungle or visiting a day-care for the elderly modeled after a casino, Davies brings a storyteller’s eye to places where the economy has been destroyed, distorted, and even turbocharged. In adapting to circumstances that would be unimaginable to most of us, the people he encounters along the way have helped to pioneer the economic infrastructure of the future.

At once personal and keenly analytical, Extreme Economies is an epic travelogue for the age of global turbulence, shedding light on today’s most pressing economic questions.

"Davies, a former economics editor of The Economist who’s also done stints as an adviser at the Bank of England and to the chancellor of the Exchequer, brings that magazine’s signature virtues to bear . . . All nine studies [in Extreme Economies] are engagingly written and genuinely interesting, each a dive into a corner of the world you don’t hear much about that conveys, briefly and clearly, a sense of how this far-off place works . . . Davies’s visit to Zaatari, a massive, hastily built camp for Syrian refugees in Jordan, is fascinating reportage on its own terms and also a brilliant illustration of Adam Smith’s observations about the power of the natural human tendency to 'truck, barter and exchange one thing for another.'"—Matthew Yglesias, The New York Times Book Review

"Davies delivers . . . crisp and sensitive reporting from an extraordinary range of inaccessible places . . . As a discussion of the strengths and weaknesses of markets versus planned economies, Extreme Economies is one of the most subtle and surprising I have read."—Tim Harford, Financial Times

"Accessible and original . . . [Extreme Economies] is not doctrinaire. It shows that markets can work wonders in unlikely places but work perversely in others and need a structure of social organisation within which to function. [Richard Davies] draws on sociology and anthropology and the simple power of observation and conversation to bring economics alive."—Vince Cable, New Statesman

"Exciting to see economics strike out into the real world showing how trauma and chaos can yield raw truths about markets, monopolies and the state."—Simon Jenkins, columnist at The Guardian and Evening Standard

"[A] worthwhile lesson, today more than ever. Much of the evidence from Davies’s book, a bottom-up look at what happens when disaster strikes, is encouraging: before long, individuals rebuild themselves and their livelihoods. Fashionable as it is to do it down, capitalism is remarkably resilient."—Ed Conway, The Times (London)

"Extreme Economies makes sense of the forces shaping the future—urbanization, aging, technological change, gains and losses of human and social capital—by describing what people do when pushed to their limits. This strategy of going to extremes pays off spectacularly. One short chapter on the Zaatari refugee camp reveals more about the future of work than the entire stream of reports that is spewing out of the 'serious people' echo chamber. Taken together, the book's nine deep dives are a much needed reminder that an economy is not what happens when equations interact with data. An economy is what is what happens when people—real people, people with names—interact with people. Anyone who wants to learn economics, is learning economics, or pretends to know some economics should read this book."—Paul Romer, winner of the 2018 Nobel Prize in Economic Sciences

"We can't forecast the coming decades, but it is enlightening to look at extreme economies for clues to what we may be in store for. Davies's book is fascinating."—Robert J. Shiller, winner of the 2013 Nobel Prize in Economic Sciences

“We learn most about ourselves at times of extreme stress and challenge. Using nine compelling country case studies, Richard Davies brilliantly demonstrates that the same is true of our economic systems. In its approach and insights, Extreme Economies is a revelation—and a must-read.”—Andy Haldane, Chief Economist at the Bank of England

"A highly original approach to understanding what really makes economies tick. Both insightful and accessible to non-economists."—Mervyn King, former Governor of the Bank of England

"Richard Davies balances economics with art, exposing the trade-offs made by people living today and forcing us to question the outcomes of our decisions."—Will Page, Chief Economist at Spotify

"A must read for anyone feeling desperate about the state of world affairs today, Extreme Economies demonstrates with vivid clarity and humanity how those in the most challenging situations can prosper. Many economists are quite narrow in their thinking about life’s challenges, this book beautifully demonstrates why the world’s most interesting places force us to think more openly." —Lord Jim O'Neill, Chair, Chatham House

"Davies, a former economics editor of The Economist, debuts with a well-curated, globe-spanning study of nine irregular financial systems to understand where the modern world is headed . . . In each location, Davies keeps his perspective on broad, and often disturbing, historical trends while celebrating the resourcefulness of the individuals and communities he profiles. His analysis is straightforward enough for general readers to understand, while business-people, economic forecasters, and policymakers will find his insights imminently applicable to their own work. This ambitious and thought-provoking guide helps to make sense of the economic future."—Publishers Weekly (starred review)


An enemy lays waste a country by fire and sword, and destroys or carries away nearly all the moveable wealth existing in it: all the inhabitants are ruined, and yet in a few years after, everything is much as it was...

Richard Davies is a British economist and journalist. He is a fellow at the London School of Economics, and has served as economic adviser to the Chancellor of the Exchequer and Chair of the Council of Economic Advisers at HM Treasury. The author of Extreme Economies, he also served as the economics editor of The Economist.