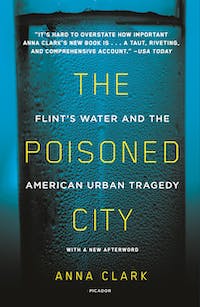 Winner of the Sydney Hillman Prize for Book Journalism

When the people of Flint, Michigan, turned on their faucets in April 2014, the water pouring out was poisoned with lead and other toxins.

Through a series of disastrous decisions, the state government had switched the city’s water supply to a source that corroded Flint’s aging lead pipes. Complaints about the foul-smelling water were dismissed: the residents of Flint, mostly poor and African American, were not seen as credible, even in matters of their own lives.

It took eighteen months of activism by city residents and a band of dogged outsiders to force the state to admit that the water was poisonous. By that time, twelve people had died and Flint’s children had suffered irreparable harm. The long battle for accountability and a humane response to this man-made disaster has only just begun.

In the first full account of this American tragedy, The Poisoned City recounts the gripping story of Flint’s poisoned water through the people who caused it, suffered from it, and exposed it. It is a chronicle of one town, but could also be about any American city, all made precarious by the neglect of infrastructure and the erosion of democratic decision making. Places like Flint are set up to fail—and for the people who live and work in them, the consequences can be fatal.

“A comprehensive chronicle of the crisis—with an eye for the institutional corruption and indifference that enabled it.”—The New York Times

“An exceptional work of journalism. Clark delivers a thorough account of a still-evolving public health crisis, one with an unmistakable racial subtext . . . Her book is a deeply reported account of catastrophic mismanagement. But it’s also a celebration of civic engagement, a tribute to those who are fighting back against governmental malpractice.”—San Francisco Chronicle

“It’s hard to overstate how important Anna Clark’s new book is . . . A taut, riveting and comprehensive account . . . Clark is meticulous in untangling the welter of misstatements, cover-ups and dismissals of the problem’s severity by officials convinced that staunching the red ink hemorrhaging the crippled economies of Flint and Michigan somehow was more important than children afflicted by lead poisoning.”—USA Today

“A thorough, nuanced account of the public health disaster in Flint . . . Clark goes into exquisite detail explaining not only what happened, but also why it happened… Clark does a masterful job weaving together history, science and rigorous reporting to tell Flint’s story.”—Science News

“A sobering read through all the spin and cover ups . . . A cornucopia of history and responsibly researched details . . . I have yet to encounter a more thorough, accurate or readable account of the poisoning of Flint’s municipal water supply than The Poisoned City. This is an important book, for Flint, for all American cities, and for our nation.”—East Village Magazine, Flint, Michigan

“The story of the Flint crisis is disturbing enough even if one knows only a few details. But the entire case, as laid out by Anna Clark, is enraging. Clark has sifted the layers of politics, history, and myopic policy to chronicle the human costs of this tragedy. Flint is not an outlier, it’s a parable—one whose implications matter not just to a single municipality but to every city in the country and all who live in them.”—Jelani Cobb, Ira A. Lipman Professor of Journalism, Columbia University

“With every heartbreaking detail, Anna Clark’s must-read and beautifully rendered account of the Flint water crisis makes clear that this horrific poisoning of an essential American city was never just an unfortunate accident. Instead, it was the tragic, and indeed tragically inevitable, result of the fiscal, as well as environmental, racism that seems to run as deeply and powerfully in this country as water itself.”—Heather Ann Thompson, author of Blood in the Water: The Attica Prison Uprising of 1971 and Its Legacy

“Anna Clark’s book on the Flint water crisis rises to a great challenge: it sacrifices neither complexity nor moral clarity. And by etching this story’s outlines in decades of racist neglect, it is not just a splendid work of journalism. It is a genuine contribution to history.”—Rick Perlstein, author of The Invisible Bridge: The Fall of Nixon and the Rise of Reagan

“The Poisoned City is a gripping account of a devastating, unnatural disaster. Through deep research and on-the-ground reporting, Anna Clark makes the case that Flint’s water crisis is the result of decades of disinvestment and neglect, worsened by austerity policies and governmental malfeasance. This is essential reading for anyone who wants to understand America’s ongoing failure to deal with environmental injustice, racial inequality, and economic marginalization.”—Thomas J. Sugrue, author of The Origins of the Urban Crisis: Race and Inequality in Postwar Detroit

“The poisoning of Flint was unintentional but it was no accident. Read Anna Clark’s empathetic yet emphatic history and you will understand how this American tragedy could have been prevented—and why it wasn’t. Her book will make you mad, but it will also give you hope for the rebirth of our cities and maybe even our democracy.”—Dan Fagin, author of Toms River: A Story of Science and Salvation

“A complex, exquisitely detailed account . . . A potent cautionary tale of urban neglect and indifference . . . Clark goes far beyond the immediate crisis—captured nationally in images of bottled water being distributed to Flint’s poor, the most severely affected—to explain ‘decades of negligence’ that had mired the city in ‘debt, dysfunctional urban policy, disappearing investment, disintegrating infrastructure, and a compromised democratic process.’ She warns that other declining American cities are similarly threatened.”—Kirkus Reviews (starred review)

“Incisive and informed . . . In the first full accounting of the Flint water crisis, Clark combines a staggering amount of research and several intimate story lines to reveal how the Michigan city was poisoned by its leaders and then largely abandoned to its fate by state officials . . . Clark takes no prisoners, naming all the names and presenting the confirming research. ‘Neglect,’ she warns, ‘is not a passive force in American cities, but an aggressive one.’ The Poisoned City is an environmental tent revival for people who continue to suffer and a call to arms for everyone who values professional local journalism.”—Booklist (starred review)

“Compelling . . . A comprehensive account [that] boils down this complex tragedy . . . While devastating, this account is also inspiring in its coverage of the role of Flint’s ‘lionhearted residents’ and their grassroots activism, community organizing, and independent investigation . . . This extremely informative work gives an authoritative account of a true American urban tragedy that still continues.”—Publishers Weekly

“An arresting and copiously documented saga of moneyed corruption . . . A bracing, closely reported chronicle . . . Clark ably pieces together the grotesque convergence of forces that transformed Flint into a byword of failed oversight and artificially induced hazard. And she rightly notes that the water crisis, as sudden and unexpected as it might have seemed, was the culmination of more than a generation’s worth of systemic neglect and cynical austerity-minded pillaging from on high.”—Bookforum


And pines with thirst amidst a sea of waves.

Anna Clark is a journalist living in Detroit. Her writing has appeared in ELLE Magazine, The New York Times, The Washington Post, Politico, the Columbia Journalism Review, Next City, and other publications. Anna edited A Detroit Anthology, a Michigan Notable Book, and she had been a writer-in-residence in Detroit public schools as part of the InsideOut Literary Arts program. She has also been a Fulbright fellow in Nairobi, Kenya, and a Knight-Wallace journalism fellow at the University of Michigan. Her books include The Poisoned City and Literary Luminaries.