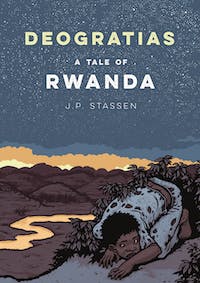 
The 2000 winner of the Goscinny Prize for outstanding graphic novel script, this is the harrowing tale of the Tutsi genocide in Rwanda, as seen through the eyes of a boy named Deogratias. He is an ordinary teenager in love with a girl named Bénigne, but Deogratias is a Hutu and Bénigne is a Tutsi who dies in the genocide, and Deogratias himself plays a part in her death. With skill and understanding, Stassen's Deogratias takes us back and forth in time, showing only before and after the killings—and revealing the grip of madness and horror on one young boy and his country.

Told with artistry and intelligence, this graphic novel offers a window into a dark chapter of recent human history and exposes the West's role in the tragedy. Stassen's interweaving of the aftermath of the genocide and the events leading up to it heightens the impact of the horror, giving powerful expression to the unspeakable, indescribable experience of ordinary Hutus caught up in the violence. An introduction written by translator Alexis Siegel gives a few historical pointers for readers unfamiliar with the Rwandan tragedy.

"Not so much a memoir as a valuable historical document, Deogratias: A Tale of Rwanda, written and illustrated by Stassen, provides a beautiful but harrowing reading experience. It follows the grin fate of a boy trapped in the midst of the Rwandan genocide, putting the violence into narrow focus by showing its devastating effects on just one young life. The lust, saturated beauty of Stassen's artwork provides a stark contrast with the brutal world he's recording."—BookPage

"Deogratias is less graphic than might be expected from its subject matter, but it doesn't pull any punches. This graphic novel's worldview is bleak: Deogratias is a tale with no heroes. The full-color art can be both brutal and beautiful, and is extremely effective . . . It is highly recommended."—KLIATT

"Deogratias means 'thanks be to God,' and it's the name of a boy coming of age in Rwanda in 1994. He is just figuring out what it means to be a man, and wrestling with the feelings he harbors toward two sisters, Apollinaria and Benina. The sisters are themselves struggling to establish their own place in society and understand the difficult decisions their mother, Venetia, has made—Apollinaria's real father is a white Catholic priest, and Venetia has been forced to leave the country in the past to save her daughters. But Deogratias is Hutu, and they are Tutsi, a simple fact that renders all of their internal battles irrelevant. This award-winning comic was originally published in Belgium in 2000 and has an introduction explaining the history leading to the Rwandan genocide. The heartbreaking power of Deogratias is how it keeps the reader distant from the atrocities by showing the trivial cruelties of everyday life before and after the genocide. Stassen is a journalist who lives in Rwanda, and his art is bold and clear, using different color palettes to seamlessly shift between before and after. There is no catharsis, only the realization that even justice turns its champion into a monster."—Publishers Weekly

"In this harrowing fictionalized account of the Rwandan genocide, readers meet Deogratias, a teenaged Hutu. His friends Benina and Apollinaria are Tutsi–a race that is being ethnically cleansed by Hutu extremists. As the conflict escalates, Deogratias witnesses murders and is forced to become involved in brutal acts of violence. He suffers a mental breakdown. The story is told through a series of flashbacks while he skates the line between rational and insane. Stassen spares his readers none of the brutality and visceral cruelties of this atrocity. Scenes of rape, harsh language, and some sexual content solidly designate this book for a mature audience. An introduction sets the backdrop and explains the historical significance of the period. This is one of the most intense, gripping graphic novels to date . . . A masterful work with vibrant, confident art, this book will stay with and haunt its readers."—School Library Journal

J. P. Stassen won the coveted Goscinny prize for Deogratias: A Tale of Rwanda, and has developed other stories that offer a window into African daily life. His artwork is remarkably distinctive and eminently readable. He lives in Rwanda with his family.