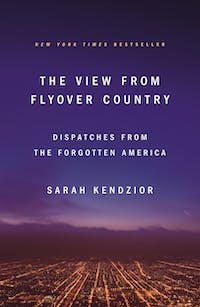 In 2015, Sarah Kendzior collected the essays she reported for Al Jazeera and published them as The View from Flyover Country, which became an ebook bestseller and garnered praise from readers around the world. Now, The View from Flyover Country is being released in print with an updated introduction and epilogue that reflect on the ways that the Trump presidency was the certain result of the realities first captured in Kendzior’s essays.

A clear-eyed account of the realities of life in America’s overlooked heartland, The View from Flyover Country is a piercing critique of the labor exploitation, race relations, gentrification, media bias, and other aspects of the post-employment economy that gave rise to a president who ruled like an autocrat. The View from Flyover Country is necessary reading for anyone who believes that the only way for America to fix its problems is to first discuss them with honesty and compassion.

“Please put everything aside and try to get ahold of Sarah Kendzior’s collected essays, The View from Flyover Country. I have rarely come across writing that is as urgent and beautifully expressed. What makes Kendzior’s writing so truly important is [that] it . . . documents where the problem lies, by somebody who lives there.”—The Wire

“Sarah Kendzior is as harsh and tenacious a critic of the Trump administration as you’ll find. She isn’t some new kid on the political block or a controversy machine . . . Rather she is a widely published journalist and anthropologist who has spent much of her life studying authoritarianism.”—Columbia Tribune


“The talented Kendzior . . . writes intelligently and with great empathy about problems faced by the Midwest.”—New York Post

“Kendzior’s writing, while often concise and clever like this, is just as often backed by statistics, attributions or an illustrative profile . . . Though her message is alarming, it is softened with compassion.”—St. Louis Post-Dispatch

The Audacity of Despair


This is a collection of essays I wrote between 2012 and 2014. It covers topics such as the collapse of the U.S. economy, the abandonment of the American heartland, the loss of opportunities...

Sarah Kendzior is best known for her reporting on St. Louis, her coverage of the 2016 election, and her academic research on authoritarian states. She is currently an op-ed columnist for the Globe and Mail and she was named by Foreign Policy as one of the “100 people you should be following on Twitter to make sense of global events.” Her reporting has been featured in many publications, including Politico, Slate, The Atlantic, Fast Company, The Chicago Tribune, TeenVogue, and The New York Times.