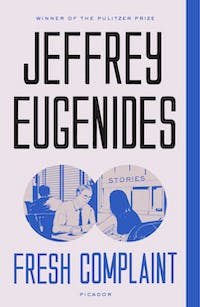 Jeffrey Eugenides’s bestselling novels have shown him to be an astute observer of the crises of adolescence, self-discovery, family love, and what it means to be American. The stories in Fresh Complaint explore equally rich­­—and intriguing­­—territory.

Ranging from the bitingly reproductive antics of “Baster” to the dreamy, moving account of a young traveler’s search for enlightenment in “Air Mail” (selected by Annie Proulx for Best American Short Stories), this collection presents characters in the midst of personal and national emergencies. We meet a failed poet who, envious of other people’s wealth during the real-estate bubble, becomes an embezzler; a clavichordist whose dreams of art flounder under the obligations of marriage and fatherhood; and, in Fresh Complaint, a high school student whose wish to escape the strictures of her immigrant family lead her to a drastic decision that upends the life of a middle-aged British physicist.

Narratively compelling, beautifully written, and packed with a density of ideas despite their fluid grace, these stories chart the development and maturation of a major American writer.

"Eugenides has always been a sharp and exacting writer, and nearly every one of the stories collection is teachable, a model of its own kind of Swiss-clock craftsmanship."—Lauren Groff, The New York Times

“[The Marriage Plot] is sly, fun entertainment, a confection for English majors and book lovers . . . Mr. Eugenides brings the period into bright detail—the brands of beer, the music, the affectations—and his send-ups of the pretensions of chic undergraduate subcultures are hilarious and charmingly rendered . . . [His] most mature and accomplished book so far”—Sam Sacks, The Wall Street Journal

“This is a story about being young and bright and lost, a story Americans have been telling since Hemingway's The Sun Also Rises. Our exceptionally well-read but largely untested graduates still wonder: How should I live my life? What can I really believe in? Whom should I love?”—Ron Charles, The Washington Post

“Eugenides steers effortlessly through the intertwining tales of his three protagonists, shifting seamlessly among their three viewpoints and overlapping their stories in a way that's easy to follow and never labored. His prose is smooth but never flashy, and his eye for the telling detail or gesture is keen. Slowly but confidently he fleshes out his characters, and as they slowly accrue weight and realism, readers will feel increasingly opinionated about the choices they make . . .”—Patrick Condon, San Francisco Chronicle

“Eugenides, a master storyteller, has a remarkable way of twisting his narrative in a way that seems effortless; taking us backward and forward in time to fill in details . . . For these characters, who don't live in Jane Austen's world, no simple resolution will do for them in the world. And yet you close this book with immense satisfaction—falling in love just a bit yourself, with a new kind of marriage plot.”—Moira Macdonald, Seattle Times

"The absorbing fiction in Fresh Compliant renders us . . . freshly grateful for what literature can do."—NPR

"An excellent short story collection . . . In each, Eugenides deploys his pronounced gifts for comedy and characterization at the same time as he builds an overwhelming atmosphere of suffocation."—The Guardian


Coming up the drive in the rental car, Cathy sees the sign and has to laugh. “Wyndham Falls. Gracious Retirement Living.”

Not exactly how Della has described it.

The building comes into view next. The main...

Jeffrey Eugenides was born in Detroit and attended Brown and Stanford Universities. His first novel, The Virgin Suicides, was published by FSG to great acclaim in 1993, and he has received numerous awards for his work. In 2003, he received the Pulitzer Prize for his novel Middlesex (FSG, 2002), which was also a finalist for the National Book Critics Circle Award, the International IMPAC Dublin Literary Award, and France’s Prix Médicis. The Marriage Plot (FSG, 2011) was a finalist for the National Book Critics Circle Award, and won both the Prix Fitzgerald and the Madame Figaro Literary Prize. Eugenides is a professor of creative writing in the Lewis Center for the Arts at Princeton.