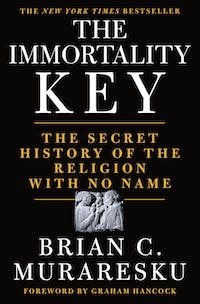 The most influential religious historian of the 20th century, Huston Smith, once referred to it as the "best-kept secret" in history. Did the Ancient Greeks use drugs to find God? And did the earliest Christians inherit the same, secret tradition? A profound knowledge of visionary plants, herbs and fungi passed from one generation to the next, ever since the Stone Age?

There is zero archaeological evidence for the original Eucharist—the sacred wine said to guarantee life after death for those who drink the blood of Jesus. The Holy Grail and its miraculous contents have never been found. In the absence of any hard data, whatever happened at the Last Supper remains an article of faith for today’s 2.5 billion Christians. In an unprecedented search for real answers, The Immortality Key examines the archaic roots of the ritual that is performed every Sunday for nearly one third of the planet. Religion and science converge to paint a radical picture of Christianity’s founding event. And after centuries of debate, to solve history’s greatest puzzle once and for all.

Before the birth of Jesus, the Ancient Greeks found salvation in their own sacraments. Sacred beverages were routinely consumed as part of the so-called Ancient Mysteries—elaborate rites that led initiates to the brink of death. The best and brightest from Athens and Rome flocked to the spiritual capital of Eleusis, where a holy beer unleashed heavenly visions for two thousand years. Others drank the holy wine of Dionysus to become one with the god. In the 1970s, renegade scholars claimed this beer and wine—the original sacraments of Western civilization—were spiked with mind-altering drugs. In recent years, vindication for the disgraced theory has been quietly mounting in the laboratory. The constantly advancing fields of archaeobotany and archaeochemistry have hinted at the enduring use of hallucinogenic drinks in antiquity. And with a single dose of psilocybin, the psychopharmacologists at Johns Hopkins and NYU are now turning self-proclaimed atheists into instant believers. But the smoking gun remains elusive.

If these sacraments survived for thousands of years in our remote prehistory, from the Stone Age to the Ancient Greeks, did they also survive into the age of Jesus? Was the Eucharist of the earliest Christians, in fact, a psychedelic Eucharist?

With an unquenchable thirst for evidence, Muraresku takes the reader on his twelve-year global hunt for proof. He tours the ruins of Greece with its government archaeologists. He gains access to the hidden collections of the Louvre Museum to show the continuity from pagan to Christian wine. He unravels the Ancient Greek of the New Testament with the world’s most controversial priest. He spelunks into the catacombs under the streets of Rome to decipher the lost symbols of Christianity’s oldest monuments. He breaches the secret archives of the Vatican to unearth manuscripts never before translated into English. And with leads from the archaeological chemists at the University of Pennsylvania and the Massachusetts Institute of Technology, he unveils the first scientific data for the ritual use of psychedelic drugs in classical antiquity.

The Immortality Key reconstructs the suppressed history of women consecrating a forbidden, drugged Eucharist that was later banned by the Church Fathers. Women who were then targeted as witches during the Inquisition, when Europe’s sacred pharmacology largely disappeared. If the scientists of today have resurrected this technology, then Christianity is in crisis. Unless it returns to its roots.

Featuring a Foreword by Graham Hancock, the New York Times bestselling author of America Before: The Key to Earth's Lost Civilization.

"An old-fashioned detective story, like The Da Vinci Code. Except it doesn't suck. And it's about psychedelics."—Sean Illing, Vox

"Structured as a travel diary, in the style of a real-life Da Vinci Code, The Immortality Key tells the story of a dozen-year quest for Christianity's psychedelic roots. A thorough work, performed assiduously."—Ido Hartogsohn, Haaretz

“[L]ikely to become a classic study . . . The Immortality Key lands another powerful blow against the logic and rationale of the drug war and offers a cogent argument in favor of the responsible use of entheogens . . . it’s a ripping read, one that roughly hews to the form of a mystery—or maybe a Dan Brown conspiracy thriller. That’s an awful lot for an author to accomplish in a first book, but Muraresku has done it all deftly, and given the movement for cognitive and religious freedom some great material to work with.”—Clifton Ross, Quillette

"The book—which is like nothing I had read before, it puts other ‘popular scholarship’ to shame—is part popularized classical scholarship and part Da Vinci Code-influenced investigative journalism."—Candida Moss, The Daily Beast

"Amazing. Truly fascinating. Indiana Jones meets the history of psychedelic experience within religion. I want to see a reality docuseries based on this."—John Fugelsang, host of Tell Me Everything

"The Immortality Key is an astonishing and remarkable book that explores the mysterious links between psychedelic drugs, human consciousness, and the origins of Christianity. It presents truly ground-breaking research on many levels, tracing the use of psychedelic drugs from Ancient Greece through Rome and into the early days of Christianity, where they played a role—possibly a crucial one—in the new religion of Jesus Christ. This is a fascinating book, which I highly recommend."—Douglas Preston, #1 New York Times bestselling author of The Lost City of the Monkey God

"An outstanding inquiry into the power of the Mysteries in the ancient world. A sweeping, persuasive argument from a true Renaissance intellect. The writing is most vivid."—Gregory Nagy, Francis Jones Professor of Classical Greek Literature, Harvard University

"A fascinating analysis of the mystical roots of ancient religion, and a rediscovery of a forgotten ritual for the modern world."—Deepak Chopra

"In Brian Muraresku, the psychedelic theory of religion has its newest and most accomplished scholar-historian (who also happens to be very funny). This is no crackpot idea. This is genuine scholarship at its deepest, most comparative, and most conceptually radical. The breadth of the investigation is simply astonishing: the Eleusinian Mysteries; the cosmic love of God; Göbekli Tepe and Indo-European studies; Greek, Latin, Sanskrit, and Catalan; flying witches and the long religious war on women; the Vatican Secret Archives; democracy, ethics, and the unity of humankind; hard archaeochemical and DNA evidence; the first (Dionysian) miracle of Christ in the Gospel of John; the political radicalism of the Eucharist; LSD-laced graveyard beer and psychedelic wine. Buckle up tight, Toto. You were never in Kansas. It’s Oz everywhere and always."—Jeffrey J. Kripal, Associate Dean of Faculty and Graduate Studies, Rice University, author of Esalen: The Religion of No Religion

"Muraresku has successfully unwrapped one of history's greatest riddles with a measured, skeptical eye. His ability to sift through the evidence with an open mind and discriminating wit keeps the pages turning."—Leslie Kean, author of UFOs: Generals, Pilots and Government Officials Go on the Record and Surviving Death: A Journalist Investigates Evidence For An Afterlife

"Brian Muraresku's The Immortality Key connects the lost, psychedelic sacrament of ancient Greek religion to early Christianity—exposing the true origins of Western Civilization. Muraresku brings to light a secret with the capacity to revolutionize our understanding of the past and chart a bold, new course for the future."—Graham Hancock, The New York Times Bestselling Author of America Before

"In The Immortality Key, Muraresku reconstructs the forgotten history of psychedelics in the development of Western civilization. His analysis of the roots of Christianity will shake the foundation of organized religion and point the way to a revolution in consciousness."—Andrew Weil, M.D.

"An impeccably researched journey to the crossroads of history. The questions are provocative, the disclosures earth-shaking. By deciphering the relationship between Jesus and Dionysos, Brian Muraresku has achieved nothing less than a radical re-envisioning of the Christian story."—Mark Arey, Former Director of the Office of Inter-Orthodox, Ecumenical and Interfaith Relations of the Greek Orthodox Archdiocese of America

"A timely message, given the re-emergence of psychedelic research for end-of-life distress. A tour de force on the perennial quest to unlock the mystery of death. A spiritual adventure page-turner that’s not easy to put down. And a mystery tour well worth taking."—Anthony P. Bossis Ph.D., Clinical Assistant Professor of Psychiatry, New York University School of Medicine

"With his new book, The Immortality Key, Brian Muraresku offers an invigorating look at the birth of religion as the ancient secret of dying before dying, providing us with a rejuvenating blast of what my friend Huston Smith described as authentic enthusiasmos, an ecstatic experience of the god within."—Phil Cousineau, author of Once and Future Myths, and coauthor with Huston Smith of And Live Rejoicing: Chapters from a Charmed Life

"A manifesto, briskly paced and engaging from page one, on the very real possibility of a psychedelic eucharist. I strongly recommend this intriguing, provocative, and thoughtful book."—Julie Holland, MD, author of Good Chemistry: The Science of Connection From Soul to Psychedelics

"In his Introduction alone, Muraresku captures the excitement of what psychedelics can offer our species in this time of crisis. What an exhilarating adventure into the heart of the Ancient Mysteries, and the psychedelic key to Eleusis. Somewhere over the rainbow, my dear friend Albert Hofmann is smiling. The secret is out!"—Amanda Feilding, Founder and Director of the Beckley Foundation

"Like a modern-day Galileo, combining meticulous scholarly analysis with highly rarefied fieldwork, Muraresku is willing to bravely challenge sacred cow orthodoxies, unafraid of where the facts and evidence lead him. He has the standing and erudition to do so. Deftly weaving in humor and contemporary policy, Muraresku’s book is of utmost urgency in the search for what it means to be alive and inevitably die. This page-turner presents the hard archeological evidence substantiating the LSD-like chemical presence in the Eleusinian and Dionysian Mysteries, which carried on for thousands of years, reappearing in democratized form as the Eucharist in the mystery cult of early Christianity before its suppression under the Roman Empire. Here revealed are the true origins of the dominant religion of Western civilization, and the lengths to which its early progenitors went to preserve female spiritual leadership, and the psychedelic sacrament that was their lodestar."—Sunil Kumar Aggarwal, MD, PhD, Co-Founder and Co-Director, AIMS Institute; Affiliate Assistant Professor of Rehabilitation Medicine and Geography, University of Washington

"Psychedelic Eucharist anyone? This amazing researcher Brian Muraresku has uncovered what has been called the biggest secret in history. Really enjoying reading The Immortality Key, it places the psychedelic truth in more irrefutable historic context."—Alex Grey, CoSM

The Immortality Key, a new book by Brian Muraresku

The Immortality Key is a groundbreaking dive into the role psychedelics have played in the origins of Western civilization, and the real-life quest for the Holy Grail. Foreword by Graham Hancock.

BRIAN C. MURARESKU graduated Phi Beta Kappa from Brown University with a degree in Latin, Greek and Sanskrit. As an alumnus of Georgetown Law and a member of the New York Bar, he has been practicing law internationally for fifteen years. He lives outside Washington D.C. with his wife and two daughters. In 2016, Muraresku became the founding executive director of Doctors for Cannabis Regulation. Their work has been featured on CNN and ESPN, as well as The Washington Post and San Francisco Chronicle. In arbitration with the NFL in 2018, Muraresku represented the first professional athlete in the United States to seek a therapeutic use exemption for cannabis. The Immortality Key is his debut book.