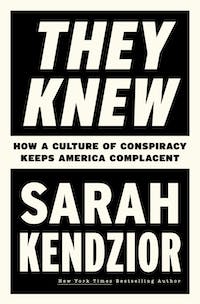 Conspiracy theories are on the rise because officials refuse to enforce accountability for real conspiracies. Uncritical faith in broken institutions is as dangerous as false narratives peddled by propagandists.

The truth may hurt—but the lies will kill us.

They Knew discusses conspiracy culture in a rapidly declining United States struggling with corruption, climate change, and other crises. As the actions of the powerful remain shrouded in mystery—“From Norman Baker to Jeffrey Epstein, Iran-Contra to January 6" (VF)—it is unsurprising that people turn to conspiracy theories to fill the informational void. They Knew exposes the tactics these powerful actors use to placate an inquisitive public.

Here, for the first time, Kendzior blends her signature whip-smart prose and eviscerating arguments with lyrical and intimate examinations of the times and places that haunt American history. "America is a ghost story," writes Kendzior, as she unearths decades of buried history, providing an essential and critical look at how to rebuild our democracy by confronting the political lies and crimes that have shaped us.

"Her writing raises points worth discussing and dissecting, in ways that can make readers stop and think and come up with conclusions that may make sense—but aren’t always easy to accept."—St. Louis Post-Dispatch

"Kendzior chooses her examples of embedded crime with the skill of a brain surgeon—attempting a reverse lobotomy on a mostly comatose nation."—Wall Street on Parade

“A detailed look into both the appeal of conspiracy theories and the effects that they can have on society writ large.”—InsideHook

“The pathos of truth-seeking left me thinking of Herman Melville. I can't remember the last time I read a book where every sentence delivered."—Timothy Snyder, #1 New York Times bestselling author of On Tyranny

"A sharp dissection of a culture of lies, secrets, and conspiracies—including 'the original conspiracy theory: American exceptionalism' . . . A provocative, pointed challenge to all Americans to dig harder for the truth."—Kirkus Reviews

"Deftly dissects the tangled truths behind the conspiracies that intertwine American and international politics, business, and criminality with a style reminiscent of Ronan Farrow’s Catch and Kill or Bob Woodward’s recent books . . . Kendzior's compelling and urgent prose will speak to readers who are working to make sense of the current political and social landscapes."—Booklist

Sarah Kendzior is the New York Times bestselling author of Hiding in Plain Sight and The View from Flyover Country. She has a PhD in anthropology from Washington University in St. Louis, where she researched propaganda and state crimes in authoritarian regimes. She is the co-host of the acclaimed podcast Gaslit Nation with Andrea Chalupa and was named by Foreign Policy as one of the “100 people you should be following on Twitter to make sense of global events.” Her reporting has been featured in many publications, including NBC News, The Guardian, The Atlantic, Fast Company, The Chicago Tribune, TeenVogue, The Globe and Mail, and The New York Times. She lives in St. Louis.