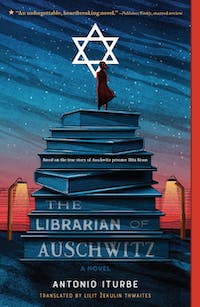 Fourteen-year-old Dita is one of the many imprisoned by the Nazis at Auschwitz. Taken, along with her mother and father, from the Terezín ghetto in Prague, Dita is adjusting to the constant terror that is life in the camp. When Jewish leader Freddy Hirsch asks Dita to take charge of the eight precious volumes the prisoners have managed to sneak past the guards, she agrees. And so Dita becomes the librarian of Auschwitz.

Out of one of the darkest chapters of human history comes this extraordinary story of courage and hope.

This title has Common Core connections.

"Iturbe’s remarkable account uses an immediate present tense to immerse readers in Dita’s story as she goes about what constitutes daily life in Auschwitz, all the while risking everything to distribute and hide the library’s books."—The Horn Book (starred review)

"The Librarian of Auschwitz is a heartbreaking and ultimately inspiring work of art."—Shelf Awareness (starred review)

"Though no punches are pulled about the unimaginable atrocity of the death camps, a life-affirming history."—Kirkus Reviews (starred review)

"Like Markus Zusak’s The Book Thief, it’s a sophisticated novel with mature themes, delivering an emotionally searing reading experience. An important novel that will stand with other powerful testaments from the Holocaust era."—Booklist (starred review)

"This novel is one that could easily be recommended or taught alongside Elie Wiesel’s Night and The Diary of Anne Frank and a text that, once read, will never be forgotten."—School Library Journal (starred review)

The Nazi officers are dressed in black. They look at death with the indifference of a gravedigger. In Auschwitz, human life has so little value that no one is shot anymore; a bullet...

Lilit Thwaites is an award-winning literary translator. After thirty years as an academic at La Trobe University in Australia, she retired from teaching and now focuses primarily on her ongoing translation and research projects.