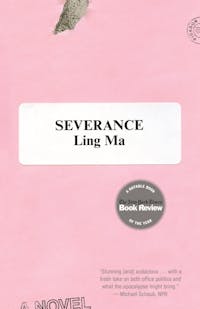 Winner of a Whiting Award

Candace Chen, a millennial drone self-sequestered in a Manhattan office tower, is devoted to routine. With the recent passing of her Chinese immigrant parents, she’s had her fill of uncertainty. She’s content just to carry on: She goes to work, troubleshoots the teen-targeted Gemstone Bible, watches movies in a Greenpoint basement with her boyfriend.

So Candace barely notices when a plague of biblical proportions sweeps New York. Then Shen Fever spreads. Families flee. Companies cease operations. The subways screech to a halt. Her bosses enlist her as part of a dwindling skeleton crew with a big end-date payoff. Soon entirely alone, still unfevered, she photographs the eerie, abandoned city as the anonymous blogger NY Ghost.

Candace won’t be able to make it on her own forever, though. Enter a group of survivors, led by the power-hungry IT tech Bob. They’re traveling to a place called the Facility, where, Bob promises, they will have everything they need to start society anew. But Candace is carrying a secret she knows Bob will exploit. Should she escape from her rescuers?

A send-up and takedown of the rituals, routines, and missed opportunities of contemporary life, Ling Ma’s Severance is a moving family story, a quirky coming-of-adulthood tale, and a hilarious, deadpan satire. Most important, it’s a heartfelt tribute to the connections that drive us to do more than survive.

"[A] standout debut. Satiric and playful—as well as scary . . . Ling Ma is an assured and inventive storyteller [and her novel] reflects on the nature of human identity and how much the repetitive tasks we perform come to define who we are. . . . A sardonic wake-up call."—Maureen Corrigan, Fresh Air, National Public Radio

“Ma’s writing about the jargon of globalized capitalism has a mix of humor and pathos that reminded me a little of Infinite Jest and a little of George Saunders.”—Emily Witt, The New Yorker

"How do you fit a zombie novel inside an immigrant story inside a coming-of-age tale? Ling Ma . . . accomplished this feat in her gripping and original turducken of a novel . . . Fascinating."—Trine Tsouderos, The Chicago Tribune

"Shocking and ferocious . . . a fierce debut from a writer with seemingly boundless imagination. . . a wicked satire of consumerism and work culture . . . It's a stunning, audacious book with a fresh take on both office politics and what the apocalypse might bring: This is the way the world ends, Ma seems to be saying, not with a bang but a memo." —Michael Schwab, NPR.org

"A suspenseful adventure that doubles as a sly critique of late capitalism."—Boris Kachka, Vulture, “8 New Books You Should Read This Summer”

"Funny, frightening, and touching . . . Ling Ma manages the impressive trick of delivering a bildungsroman, a survival tale, and satire of late capitalist millennial angst in one book, and Severance announces its author as a supremely talented writer to watch." —The Millions

"Ma's writing is compelling and cogent, perfectly satirizing a world that often feels beyond parody."—Nylon

"Ma's language does so much in this book, and its precision, its purposeful specificity, implicates an entire generation. But what is most remarkable is the gentleness with which Ma describes those working within the capital-S System. What does it mean if a person finds true comfort working as a 'cog' in a system they disagree with? Is that comfort any less real?"—Buzzfeed

"Ling Ma’s debut novel is a marvel of form that is also an utter joy to read. Her writing fuses disparate genres into hybrid supergenres: it is a zombie novel, a road movie, an immigrant novel, a mordant satire, a novel of first love. These forms offer a narrative lens through which Ma considers the troubled American present, including end-stage capitalism and especially cultural nostalgia, brilliantly conceived here as a fatal epidemic. Ma’s stunning intelligence and imagination inflect every page, but it’s the carefully wrought moments of heartbreak mixed with flickers of joy that linger the longest."—Whiting Award Selection Committee

"Re-invents the office satire and delivers a hilariously searing critique of who we are and how we survive in a modern world. Ma’s caustic humor and incredibly smart commentary on late capitalism compares our adherence to routine and groupthink to a terminal infection. Her precise language, original voice, and use of all-too-relatable details inform the debut’s deadpan depiction of a society teetering on the edge."—Lauren Sarazen, Shondaland

"What Ma accomplishes with her fever-stricken world is what sets Severance apart. Rather than take the end of days as a chance for the usual pontifications on societal collapse—most seemingly ignorant that we built society from nothing the first time, and we would certainly do it again—Ma uses the disaster trope for interrogation on a scale small enough to lacerate.”—B. David Zarley, Paste

"Severance meets and exceeds the promise of [its] exciting description. In many ways, Severance is a novel of ideas—it artfully blends/bends genre, it boldly indicts global capitalism, consumerism, and materialism—but every one of its intellectual aims is deeply grounded in the richly felt experiences of the narrator. As a reader, this novel made me dizzy with fear for our world, today, and at the same time, it made me worry about the well-being of the compelling Candace Chen and her companions. And it made me laugh. It made me laugh a whole lot."—Joseph Scapellato, Electric Lit

"Severance shares as much with Then We Came To The End, Joshua Ferris’ meditation on the failure of an advertising agency, as it does with The Walking Dead; Ma plays with voice, alternating between the first-person singular and plural to show how easily an individual comes to identify as part of a collective and how hard it is to have that group fall apart. But, like 28 Days Later, it uses the end of the world to examine what is really important . . . If zombie stories are about the terrible power of the mob, Severance asks what kind of life is left to anyone who tries to stand against it."—Samantha Nelson, A.V. Club

"Takes the milieu of the film Frances Ha and mixes in a subdued zombie apocalypse . . . A clever and funny novel that depicts modern urban ennui and a speculative post-apocalyptic world equally well, while using its central contagion as a metaphor to critique late capitalism, globalization, and nostalgia."—Matt Stowe, Brooklyn Paper

"Severance is its own entity: an end of the world novel with two or three other novels bursting at the seams to break out . . . A dizzying, monumental read. It’s funny, it’s sad—and sometimes both at the same time . . . Severance is the nearly perfect cautionary tale of consumer culture and society’s fascination with the not so distant past . . . It’s also just a really fun read with literary panache. For either reason, this is a novel you should sit down and spend some time with. You won’t regret it, even if you’ve already read Station Eleven and have had it up to here with all of the copycats. It’s that good. Really."—Zachary Houle, Medium

"A radically understated debut novel . . . searingly underplayed . . . There's a power to the restraint, and an elegance to the understatement: It grinds you down slowly, the way riding the New York subway does, so that you've barely noticed that you're in the middle of something terrible before you're used to it. It's apocalypse by commute. And in that banality, there is enormous force."—Constance Grady, Vox

"This quirky satire of office culture . . . imagines what would happen to a Chinese American workaholic if Manhattan were hit by a sudden apocalypse."—Chicago Magazine

"A biting indictment of late-stage capitalism and a chilling vision of what comes after . . . [Ma] knows her craft, and it shows. [Her protagonist] is a wonderful mix of vulnerability, wry humor, and steely strength. . . . Ma also offers lovely meditations on memory and the immigrant experience. Smart, funny, humane, and superbly well-written."—Kirkus, starred review

"In this shrewd postapocalpytic debut, Ma imagines the end times in the world of late capitalism, marked by comforting, debilitating effects of nostalgia on its characters . . . The novel's strength lies in Ma's accomplished handling of the walking dead conceit to reflect on what constitutes the good life. This is a clever and dextrous debut."—Publishers Weekly

"A smart, searing exposé on the perils of consumerism, Google overload, and millennial malaise . . . an already established audience will be eager to discover this work."—Library Journal


The End begins before you are ever aware of it. It passes as ordinary. I had gone over to my boyfriend’s place in Greenpoint directly after work. I liked to stay over on hot summer nights because the basement was cool and damp...

Ling Ma was born in Sanming, China, and grew up in Utah, Nebraska, and Kansas. She attended the University of Chicago and received an MFA from Cornell University. Prior to graduate school she worked as a journalist and an editor. Her writing has appeared in Granta, VICE, Playboy, Chicago Reader, Ninth Letter, and other publications. A chapter of Severance received the 2015 Graywolf SLS Prize. She lives in Chicago.