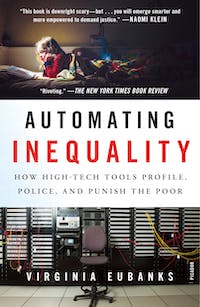 Indiana denies one million applications for healthcare, foodstamps and cash benefits in three years—because a new computer system interprets any mistake as “failure to cooperate.” In Los Angeles, an algorithm calculates the comparative vulnerability of tens of thousands of homeless people in order to prioritize them for an inadequate pool of housing resources. In Pittsburgh, a child welfare agency uses a statistical model to try to predict which children might be future victims of abuse or neglect.

Since the dawn of the digital age, decision-making in finance, employment, politics, health and human services has undergone revolutionary change. Today, automated systems—rather than humans—control which neighborhoods get policed, which families attain needed resources, and who is investigated for fraud. While we all live under this new regime of data, the most invasive and punitive systems are aimed at the poor.

In Automating Inequality, Virginia Eubanks systematically investigates the impacts of data mining, policy algorithms, and predictive risk models on poor and working-class people in America. The book is full of heart-wrenching and eye-opening stories, from a woman in Indiana whose benefits are literally cut off as she lays dying to a family in Pennsylvania in daily fear of losing their daughter because they fit a certain statistical profile.

The U.S. has always used its most cutting-edge science and technology to contain, investigate, discipline and punish the destitute. Like the county poorhouse and scientific charity before them, digital tracking and automated decision-making hide poverty from the middle-class public and give the nation the ethical distance it needs to make inhumane choices: which families get food and which starve, who has housing and who remains homeless, and which families are broken up by the state. In the process, they weaken democracy and betray our most cherished national values.

"For the poor, [Eubanks] argues, government data and its abuses have imposed a new regime of surveillance, profiling, punishment, containment and exclusion, which she evocatively calls the "digital poorhouse." While technology is often touted by researchers and policymakers as a way to deliver services to the poor more efficiently, Eubanks shows that more often, it worsens inequality. . . . Automating Inequality is a work of investigative journalism. She travels to Indiana, Pittsburgh, and Los Angeles, conducting illuminating interviews with administrators, social services staff and, most powerfully, people unlucky enough to reside in the digital poorhouse."—The New York Times Book Review

"Eubanks says we manage the poor so we don’t have to eradicate poverty . . . Eubanks explores three very different and widely separated approaches to managing, manipulating and controlling the poor in Indiana, the homeless in Los Angeles, and the child welfare in Pittsburgh."—San Francisco Review of Books

"To call the stories and data Eubanks has collected infuriating feels like an understatement . . . marginalized people are often the first to face experiments in assessment and punishment through technological tools . . . What’s incisive about Automating Inequality is how it underscores the subtle ways technology is used to this end."—The New Republic

"This is a rigorous, compelling piece of qualitative social science and one of the best-crafted nonfiction books I’ve ever read, period. As a journalist, it made me actively envious of its prose . . . a reminder of what can go awry when politicians mistake technical solutions for political solutions."—Dylan Matthews, Vox

FROM POORHOUSE TO DATABASE


“You’re going to send me to the poorhouse!”

Most of us reference the poorhouse only reflexively today. But the poorhouse was once a very real and much feared institution....

Virginia Eubanks is an Associate Professor of Political Science at the University at Albany, SUNY. She is the author of Digital Dead End: Fighting for Social Justice in the Information Age and co-editor, with Alethia Jones, of Ain’t Gonna Let Nobody Turn Me Around: Forty Years of Movement Building with Barbara Smith. Her writing about technology and social justice has appeared in Scientific American, The Nation, Harper’s, and Wired. For two decades, Eubanks has worked in community technology and economic justice movements. She lives in Troy, NY.