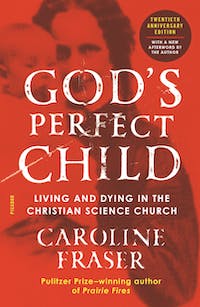 Founded by Mary Baker Eddy in 1879, Christian Science has affected the lives of millions of Americans. In this unflinching investigation, Fraser, herself raised in a Scientist household, traces the growth of the church from a small, eccentric sect into a politically powerful and socially respectable religion that has gained extraordinary legal and Congressional sanction for its practices. Fraser takes us into the closed world of Christian Scientists, who refuse to acknowledge the existence of illness and death even at the expense of their children's lives. And she explores the human cost of Christian Science's remarkable rise. A passionate expose of the dangers and delusions of religious zealotry, God's Perfect Child is the first unvarnished account of one of America's most controversial and least-understood religious movements.

"Caroline Fraser, formerly on the editorial staff of The New Yorker, does a splendid job of explaining the reasons for Christian Science's rise and fall."—Philip Zaleski, The New York Times Book Review

"Eye-opening . . . The most powerful and persuasive attack on Christian Science to have been written in the 20th century."—Martin Gardner, Los Angeles Times Book Review

"New . . . Startling . . . Fraser has an eye and ear for the kind of detail that can help readers make up their own minds about an always-controversial American religious expression."—Martin Marty, The Boston Globe

"God's Perfect Child is a cutting expose of a peculiarly American folly. As Caroline Fraser points out, Christian Science's blame-the-victim approach has been mortally dangerous to its own adherents."—Barbara Ehrenreich, author of Nickel and Dimed

"I was raised as a Christian Scientist. For me God's Perfect Child acted like an excellent deprogramming map, freeing me from that demented magical world I thought I'd left behind."—Spalding Gray, author of Gray's Anatomy

"With the brilliant clarity of a talented writer and the thoughtful depth of a serious scholar, Caroline Fraser has documented precisely how Mary Baker Eddy created the cult of Christian Science, and turned it into the religion it is today. A must-read for anyone interested in the powerful role of religion in American society, God's Perfect Child is a first-rate work by an insider with the distance and maturity for proper context and perspective. And if you are a Christian Scientist, this book could literally save your life."—Michael Shermer, author of Why People Believe Weird Things

"Fraser presents an evenhanded biography of the founder of Christian Science, Mary Baker Eddy, and a level-headed history of the sect. Eddy appears as a believable human character as well as a profound religious leader. She skillfully built up the church's structure and membership but didn't plan effectively for its functioning after her death; in fact, some of her administrative dictates subsequently caused considerable difficulties. Fraser deals with all aspects of the church itself—publications, administrative structure, finances, etc. She is especially adroit in illuminating both apparent and underlying contradictions (e.g., Why are dentistry and obstetrics OK, but not vaccinations and general medical treatment? How do Christian Science practitioners heal without practicing medicine?) in the church's regulations and procedures. She describes the church's recent problems with ill-advised involvements in broadcasting, and she explores the writings and actions of various dissident Christian Scientists in perceptive detail. Her readable, well-documented history will be a useful reference for years to come."—William Beatty, Booklist


The “traveller with the twisted staff” in Nathaniel Hawthorne’s tale “Young Goodman Brown” is Satan. Goodman Brown, a newly married Puritan, encounters the Devil on an evening walk through...

Caroline Fraser is the author of Prairie Fires: The American Dreams of Laura Ingalls Wilder, winner of the Pulitzer Prize, the National Book Critics Circle Award, the Plutarch Award, and the Heartland Prize. Her writing has appeared in The New York Review of Books, The New Yorker, The Atlantic, the Los Angeles Times, and the London Review of Books, among other publications. She lives in New Mexico.