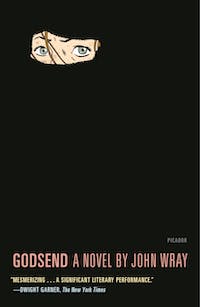 Like many other eighteen-year-olds, Aden Sawyer is intently focused on a goal: escape from her hometown. Her plan will take her far from her mother’s claustrophobic house, where the family photos have all been turned to face the wall; far from the influence of her domineering father—a professor of Islamic studies—and his new wife.

Aden’s dream, however, is worlds removed from conventional fantasies of teen rebellion: she is determined to travel to Peshawar, Pakistan, to study Islam at a madrasa. To do so, she takes on a new identity, disguising herself as a young man named Suleyman. Aden fully commits to this new life, even burning her passport to protect her secret. But once she is on the ground, she finds herself in greater danger than she could possibly have imagined. Faced with violence, disillusionment, and loss, Aden must make choices that will test not only her faith but also her most fundamental understanding of who she is, and that will set her on a wild, fateful course toward redemption by blood. John Wray’s Godsend is a coming-of-age novel like no other.

"John Wray’s serious, sober and frequently mesmerizing new novel, Godsend, is based loosely on Lindh’s story and is set essentially over the same time period, pre- and post-Sept. 11 . . . This is a significant literary performance. This novel’s contents are under enormous pressure. The author has clearly mastered a great deal of learning about Islam and warfare and the nature of life in Afghanistan, and he carefully husbands these resources. There are no blood clots of showily displayed research to block this novel’s arteries . . . Godsend builds to a shattering, balefully vivid ending. Aden survives to walk through a minefield—or is it a graveyard?"—Dwight Gardner, The New York Times

"[Godsend] becomes much stranger and more original after it arrives in Pakistan, discovering within itself a profound understanding of the demands of religious practice—of religious submission, especially—which has eluded almost every serious contemporary American novelist since 9/11. It is not only Wray’s heroine but also his novel that comes of age, steadily deepening and astounding as it develops . . . The novel exhibits the reportorial authority you might expect, with a command of detail, context, and pace reminiscent of a reality-brined adventurer like Graham Greene or Robert Stone."—James Wood, The New Yorker

"John Wray’s lean, bristling novel is filled with startling transformations: The teenage girl at its center disguises herself as a man and leaves the suburbs of California for the Taliban army in Afghanistan. Yet the most unsettling change is the way it shifts the reader’s perspectives on Sept. 11 and the war on terror."—The Wall Street Journal

"None of the Anglophone post-9/11 novels have been as ingeniously involved with the question of conversion to Islam and with the determination to take one’s acquired belief into the realm of violence as John Wray’s new novel, Godsend . . . He does an outstanding job in depicting a protagonist who has studied Islamic theology with a mix of avidity and simplicity, has taken the lessons of Qur’anic verses to heart without having matured enough to approach faith seriously . . . The novel’s highest achievement is to show how each one of her insights is nothing but an illusion."—Amir Khadem, The Los Angeles Review of Books

"Brilliantly executed . . . Mr. Wray’s novel is on one hand an entirely familiar story of youthful rebellion and on the other an unimaginable depiction of a cold-blooded killer groomed by the world’s most notorious army. Such tensions make Godsend relentlessly gripping."—Sam Sacks, The Wall Street Journal

"Godsend is a 9/11 novel unlike any other."—Joe Fassler, The Atlantic

“A furious narrative momentum carries the story to its devastating conclusion . . . Rawly unsentimental but illuminated throughout by a subtle compassion, Godsend is a novel of enormous emotional intelligence which makes for compelling and consistently unpredictable reading.”—Robin Yassin-Kassab, The Guardian

"[Godsend is] a book that has no right to work at all, but Wray’s storytelling is so taut, his prose so laser-etched, his psychology so audacious, and his wisdom so much the opposite of conventional, that it ends up working brilliantly."—Jonathan Franzen, The Guardian

"Wray's audacious fiction is clearly steeped in painstaking research, offering a devastating portrayal of the Taliban while finding a place of compassion for his profoundly misguided protagonists . . . The feat Wray pulls off is to seek understanding without ever becoming sentimental."—Dawn Raffel, Oprah

"Wray regulates the excitement levels, from tense to explosive, with a sure hand for narrative momentum . . . Wray’s prose is hard, clipped and precise, a hammer to move this grim story forward. Yet it can expand into something like Hemingway-esque eloquence in describing the terrain that opens its arms to Aden . . . [Godsend is] a work of great power, seamlessly elucidating the seductions of faith and violence."—Dan Cryer, SF Gate

“I’ve just spent every spare moment in a fever heat reading Godsend, and I’m truly dazzled by its daring literal and psychological border-crossings, its tonal complexity, and its pitiless compassion. Nothing is foreign to John Wray’s imagination. I hope I can write half as fearlessly one day.”—Karen Russell, author of Vampires in the Lemon Grove and Swamplandia!

"John Wray is making a place for himself among our greatest living writers. Godsend is a wonder to me: a fearless book about a terrifying subject. The elegance and daring of this novel left me dizzy."—Akhil Sharma, author of Family Life

"This novel crosses lines that fiction should, stretching the imagination from suburban California to a jihadi training camp in the foothills of the Hindu Kush. Wray's taut prose propels a gripping narrative that stands head and shoulders above most fiction about America's war on terror."—Hari Kunzru, author of White Tears

"This is a great book about a time and a place that I lived through. I was nostalgic, reading Godsend, for the days when I was a young girl in Afghanistan, going to the madrasa with my friends. This came as a surprise to me. But there was beauty in that life. And there is beauty in this story."—Shamila Kohestani, recipient of the Arthur Ashe Courage Award


The day her visa arrived she came home to find the pictures on the mantelpiece turned to face the wall. She felt no urge to touch them. They’d looked fine from the front, catching the light in their brushed-nickel bevels, but...

John Wray is the author of the critically acclaimed novels The Lost Time Accidents, Lowboy, The Right Hand of Sleep, and Canaan’s Tongue. He was named one of Granta’s Best of Young American Novelists in 2007. The recipient of a Whiting Writers’ Award, he lives in Brooklyn, New York.