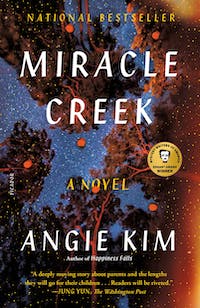 My husband asked me to lie. Not a big lie. He probably didn’t even consider it a lie, and neither did I, at first . . .

In rural Virginia, Young and Pak Yoo run an experimental medical treatment device known as the Miracle Submarine—a pressurized oxygen chamber that patients enter for therapeutic “dives” with the hopes of curing issues like autism or infertility. But when the Miracle Submarine mysteriously explodes, killing two people, a dramatic murder trial upends the Yoos’ small community.

Who or what caused the explosion? Was it the mother of one of the patients, who claimed to be sick that day but was smoking down by the creek? Or was it Young and Pak themselves, hoping to cash in on a big insurance payment and send their daughter to college? The ensuing trial uncovers unimaginable secrets from that night—trysts in the woods, mysterious notes, child-abuse charges—as well as tense rivalries and alliances among a group of people driven to extraordinary degrees of desperation and sacrifice.

Angie Kim’s Miracle Creek is a thoroughly contemporary take on the courtroom drama, drawing on the author’s own life as a Korean immigrant, former trial lawyer, and mother of a real-life “submarine” patient. Both a compelling page-turner and an excavation of identity and the desire for connection, Miracle Creek is a brilliant, empathetic debut from an exciting new voice.

"[A] thought-provoking journey of ideas [and] a fascinating study of the malleability of truth in the courtroom . . . Miracle Creek is a brave novel that challenges assumptions of reality."—Krys Lee, The New York Times Book Review

"A deeply moving story about parents and the lengths they will go for their children . . . readers will be riveted by the book’s genre-bending structure and superb pace. Miracle Creek is a stunning debut about parents, children and the unwavering hope of a better life, even when all hope seems lost."—Jung Yun, The Washington Post

“Beautifully written . . . unflinchingly honest and thought-provoking . . . Kim deftly explores the lies that people tell themselves, the temptation of hope, and the struggles of the immigrant experience through the shifting lens of intensely believable characters.”—Yangsze Choo, Entertainment Weekly

"Engrossing . . . Miracle Creek turns a courtroom murder trial into a page-turning exploration of parenting, experimental therapies, and the emotional toil of immigration."—Elle

“This clever, emotional courtroom drama pushes the boundaries of the whodunit genre. Angie Kim has created a narrative arc in her debut novel, Miracle Creek, that is unique in the annals of mystery . . . [Kim] brings more nuance to the [trial] proceedings than the 15 minutes allotted in a typical ‘Law and Order’ episode.”—Drew Gallagher, Washington Independent Review of Books

"Angie Kim’s intricately-plotted courtroom thriller isn’t a conventional whodunit where the bad guy is eventually unmasked and the reader closes the book with righteous satisfaction. Kim has weaved a more complicated web than that, one that ensnares characters many readers will empathize with—well-meaning but flawed, doing foolish things for noble reasons—and that only adds to the suspense."—Erin Kodicek, Amazon Book Review

“With so many complications and loose ends, one of the miracles of the novel is that the author ties it all together and arrives at a deeply satisfying—though not easy or sentimental—ending. Intricate plotting and courtroom theatrics, combined with moving insight into parenting special needs children and the psychology of immigrants, make this book both a learning experience and a page-turner. Should be huge.”—Kirkus Reviews (starred review)

"Kim effectively uses her background as a trial lawyer, skillfully crafting her narrative by interweaving the stories of her characters, each of whom speak for themselves as the story progresses toward a surprise ending. With touches of mystery, legal thriller, and character-driven storytelling, where nothing is ever quite as it seems, Kim's promising debut will certainly have readers looking forward to her next offering."—Library Journal (starred review)

“A stand-out, twisty debut . . . Kim, a former lawyer, clearly knows her stuff . . . a masterfully plotted novel about the joys and pains of motherhood, the trick mirror nature of truth, and the unforgiving nature of justice.”—Publishers Weekly

SHE FELT LIKE A BRIDE walking into the courtroom. Certainly, her wedding was the last time—the only time—that a roomful of people had fallen silent and turned to stare as she entered. If it weren’t for the variety...

Angie Kim moved as a preteen from Seoul, South Korea, to the suburbs of Baltimore. She attended Stanford University and Harvard Law School, where she was an editor of the Harvard Law Review, then practiced as a trial lawyer at Williams & Connolly. Her stories have won the Glamour Essay Contest and the Wabash Prize in Fiction, and appeared in numerous publications including The New York Times, Salon, Slate, The Southern Review, Sycamore Review, The Asian American Literary Review, and PANK. Kim lives in northern Virginia with her husband and three sons. Miracle Creek is her debut novel.