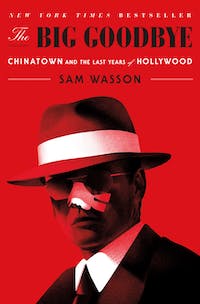 Here is Jack Nicholson at the height of his powers, as compelling a movie star as there has ever been, embarking on his great, doomed love affair with Anjelica Huston. Here is director Roman Polanski, both predator and prey, haunted by the savage death of his wife, returning to Los Angeles, the scene of the crime, where the seeds of his own self-destruction are quickly planted. Here is the fevered deal-making of “The Kid” Robert Evans, the most consummate of producers. Here too is Robert Towne’s fabled script, widely considered the greatest original screenplay ever written.

Wasson for the first time peels off layers of myth to provide the unvarnished account of its creation.

“A fascinating dive into Hollywood.”—Maureen Dowd, The New York Times

"Wasson . . . is one of the great chroniclers of Hollywood lore. And he has truly outdone himself this time."—The New York Times

“Wasson’s fascinating and page-turning description of the talent and ideas behind Chinatown is more than a mere biography of a landmark movie.”—Los Angeles Times

"An absorbing account of the making of Chinatown . . . Wasson is a stylish chronicler of Hollywood politics . . . The Big Goodbye evokes the care that went into every frame."—The Economist

“Chinatown was a watershed moment in a colorful era of American filmmaking. Wasson looks past the myth to tell the true story of its making.”—USA Today

"It’s impossible not to fall for this love letter to a love letter that pastes together the often sticky collage of how talent plus perseverance can equal a classic film."—The Associated Press

"The Big Goodbye is a graceful and worthwhile elegy to a time dear to those who are lucky enough to remember it . . . It will be hard to find a better film book published this year."—PopMatters.com

“Hollywood stories are hardly in short supply, but Sam Wasson can be trusted for some juicy, compelling discoveries. His latest investigates the making of Chinatown . . . his innovative approach: and assembly of mini-biographies of Roman Polanski, Jack Nicholson, and more, each packed with intriguing revelations.”—Entertainment Weekly

"The wondrous thing about Sam Wasson’s new book is that it feels both necessary and inevitable—as if Chinatown couldn’t (or shouldn’t) exist without it. Reading The Big Goodbye, something strange happens: it acquires the historical, dizzying, incestuous gravitas of the film itself. Wasson has a habit of making vividly thematic, compassionately revelatory art."—Bruce Wagner, author of Force Majeure and I Met Someone

"Sam Wasson has written a smart, human and utterly engaging book about an iconic American movie. With its rich depiction of 1970s Hollywood, The Big Goodbye is grounded in marvelous reportorial detail and moves with novelistic urgency."—Julie Salamon, author of The Devil's Candy and An Innocent Bystander

“If you love Chinatown, then you’ll love The Big Goodbye—and it’s good reading for any American cinema buff.”—Kirkus Reviews

“Inimitable Wasson . . . argues convincingly that Chinatown was one of the last great Hollywood films . . . this portrait of a neonoir classic will cast a spell over cinephiles.”—Library Journal (starred review)


Jack Nicholson, a boy, could never forget sitting at the bar with John J. Nicholson, Jack’s namesake and maybe even his father, a soft little dapper Irishman in glasses. He kept neatly combed what...

Sam Wasson is the author of six books including the bestselling Fosse and Fifth Avenue, 5 AM: Audrey Hepburn, Breakfast at Tiffany’s, and the Dawn of the Modern Woman. He lives in Los Angeles.