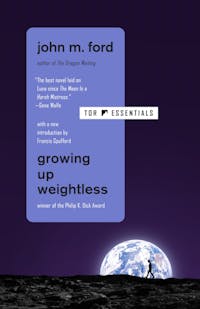 Matthias Ronay has grown up in the low gravity and great glass citadels of independent Luna—and in the considerable shadow of his father, a member of the council that governs Luna's increasingly complex society. But Matt feels weighed down on the world where he was born, where there is no more need for exploration, for innovation, for radical ideas—and where his every movement can be tracked by his father on the infonets.

Matt and five of his friends, equally brilliant and restless, have planned a secret adventure. They will trick the electronic sentinels, slip out of the city for a journey to Farside. Their passage into the expanse of perpetual night will change them in ways they never could have predicted . . . and bring Matt to the destiny for which he has yearned.


Welcome to the moon. The Luna of this book, though, is not the line-marrying penal colony, making revolution in the name of the free market, that Heinlein created in The Moon Is a Harsh...

John M. Ford (1957-2006) was a science fiction and fantasy writer, game designer, and poet whose work was held in high regard by peers ranging from Neil Gaiman to Robert Jordan to Jo Walton to Roger Zelazny, alongside innumerable others. His novels include the World Fantasy Award-winning The Dragon Waiting, the Philip K. Dick Award-winning Growing up Weightless, and the contemporary thriller The Scholars of Night. His debut novel Web of Angels (1980) has been called “cyberpunk before there was cyberpunk.” He spent the latter decade-and-a-half of his writing life in Minneapolis, Minnesota.

Read an Article about the Author at Boing

Author Bio at the Encyclopedia of Science Fiction