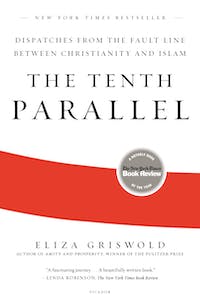 
An award-winning investigative journalist and poet, Eliza Griswold has spent the past seven years traveling between the equator and the tenth parallel: in Nigeria, the Sudan, and Somalia, and in Indonesia, Malaysia, and the Philippines. The stories she tells in The Tenth Parallel show us that religious conflicts are also conflicts about land, water, oil, and other natural resources, and that local and tribal issues are often shaped by religious ideas. Above all, she makes clear that, for the people she writes about, one's sense of God is shaped by one's place on earth; along the tenth parallel, faith is geographic and demographic.

"Written with grace and empathy . . . full of wildly different stories about people and their experiences. An accomplished poet . . . Griswold is a vivid storyteller."—Elizabeth Taylor, Chicago Tribune

"An impressive account of religious conflict . . . Griswold is deft at interweaving historical details with her narrative . . . The Tenth Parallel allows reader to look up from the war on terror to see the children, women, and men who live, or perish, with the consequences."—Rachel Newcomb, The Cleveland Plain Dealer

"In this revolutionary work, Griswold has dedicated the last seven years of her life to traveling in the world's least known places to explore the encounter between Christianity and Islam in Africa and Asia. She has brought back the unforgettable stories of Christians and Muslims along the tenth parallel whose faith is shaping the world's future. Griswold's courageous pilgrimage changes the way we think about Christianity and Islam by exploding any simplistic ‘clash' narrative. She returns us to the most basic truth of human existence: that the world and its people are interconnected."—Archbishop Desmond Tutu

"Based on years of first hand experience and observation, The Tenth Parallel is a deeply impressive achievement, which so often challenges our common assumptions. The book will be immensely rewarding for anyone who wants to make sense of the relationship between those long-estranged sister faiths, Christianity and Islam. It should be required reading for policy makers, and for anyone interested in the spiritual dimensions of the "clash of civilizations."—Philip Jenkins, author of Jesus Wars

"Eliza Griswold is an intrepid and brilliant reporter. She has written a fascinating, nuanced account of Christian-Muslim relations along the fault line of the tenth parallel that puts the arm-chair punditry about 'the clash of civilizations' to shame. It should be read by anyone who wants to understand how religion is actually lived and experienced in Africa and Asia."—Frances FitzGerald, author of Vietnam: Spirits of the Earth

"Eliza Griswold has long been one of my favorite magazine writers, and many of us have been awaiting this book with the fervent anticipation of a J. K. Rowling fan. And The Tenth Parallel does not in any way disappoint. It is brave, sad, informative, and deeply empathetic. I quake a little to think of what Ms. Griswold had to endure to come back with this book, and these stories, but we and the literary world are all the richer for it."—Tom Bissell, author of The Father of All Things

"Eliza Griswold is a courageous reporter, a gifted writer, and an acute observer of life. In The Tenth Parallel she takes us on a crucially illuminating tour of some of the most volatile terrain in the world, acquainting us with people who are far away both spatially and culturally but whose fates are intertwined with our own."—Robert Wright, author of The Evolution of God

"Eliza Griswold's The Tenth Parallel deals with a geographical slice of the Muslim world spanning Africa and Asia. With a sharp eye and equally sharp wit, Griswold dissects the events and issues that have gripped the region, uncovering their nature through memorable encounters and personalities. The story brims with insightful details and instructive lessons. Seldom does a book of this nature ranging over such vast terrain succeed in maintaining a steady focus and an engaging lightness of touch. In her hands, Islam resounds through the voice of Muslims, and religion lives through its followers and devotees. The book is a triumph of the human imagination and capacity for intercultural exploration."—Lamin Sanneh, author of Whose Religion is Christianity?

"Eliza Griswold's talent runs through this book like a blinding light. Through her daring travel, quiet observation, empathy and gift for language, she humanizes and clarifies conflicts in Africa and Asia that are often neglected or misunderstood. The Tenth Parallel is both vitally important and beautifully written."—Steve Coll, author of The Bin Ladens

"Ingeniously conceived and beautifully wrought, The Tenth Parallel traces the uneasy fault line of two great faiths, which have so much bloody history between them. In exploring the potent tensions that underlie so many of the conflicts of the present age, Eliza Griswold gives us a rare look at how complex and interwoven these two cultures actually are."—Lawrence Wright, author of The Looming Tower

"Eliza Griswold, poet and war correspondent, takes her readers on a journey through the birthplace of terror. She marches into unspeakably frightening places, alone, with only her pen as protection. And then she speaks. The poetry of Griswold's prose draws the reader in, even as she foretells great terrors to come. The Tenth Parallel is an important book by a courageous American."—Jessica Stern, author of Terror In The Name Of God

"Based on years of first hand experience and observation, The Tenth Parallel is a deeply impressive achievement, which so often challenges our common assumptions. The book will be immensely rewarding for anyone who wants to make sense of the relationship between those long-estranged sister faiths, Christianity and Islam. It should be required reading for policy makers, and for anyone interested in the spiritual dimensions of the ‘clash of civilizations.'"—Philip Jenkins, author of Jesus Wars

"The Tenth Parallel is one of the most important books you will ever read. Eliza Griswold combines the fearlessness of an investigative journalist and the bold vision of a poet to take readers on a perilous journey along the fault line between Islam and Christianity. No one else could have written this book."—Reza Aslan, author of No god but God

"Award-winning journalist Griswold chronicles her travels along the 10th parallel, the line of latitude 700 miles north of the equator and home to many Christian-Muslim standoffs. Griswold does her best to counter the received wisdom of interfaith fighting by astutely pointing out where religion is simply used as a tactic in a nonreligious conflict over land, resources, or the like. As examples of war-rejecters, multifaith, and environmental advocates, the author introduces many organizations and individuals with hopes for peace. Among them are the Nigerian pastor, who, in addition to working with a Muslim imam to stop fighting between their communities, also distributes green stoves that burn less wood, thereby preventing further deforestation and possibly inter-religious fighting over land rights. The reader also meets Nigerian Christian warriors, quasi-military Filipino Catholic gangs, and Indonesian jihadis who sell herbal cures door-to-door to raise funds. Though not a scholar of Islam, Griswold has a profound grasp of the misinterpretation and manipulation of Islam. Her insight that no single, unified sharia (Islamic law) exists is a conclusion that has eluded more celebrated authors; among other perceptions, she notes that Islam was spread more by intermarriage than the sword. Always maintaining a journalist's objective view, Griswold, a published poet, nevertheless enchants the reader with her lush, flowing prose."—Publishers Weekly (starred review)


Wase Rock is a double-humped crag that towers eight hundred feet above the green hills of Nigeria’s Middle Belt. Wase (“wah-say”) means “all- embracing” in Arabic, and it is one of Islam’s...

At the Russian Samovar in New York City, Eliza Griswold discusses her book "The Tenth Parallel."

Eliza Griswold, a fellow at the New America Foundation, received a 2010 Rome Prize from the American Academy in Rome. Her journalism has appeared in The Atlantic, The New Yorker, The New York Times Magazine, and Harper's Magazine, among others. A 2007 Nieman Fellow at Harvard University, she was awarded the first Robert I. Friedman Award for investigative reporting. A collection of her poems, Wideawake Field, was published by FSG in 2007.