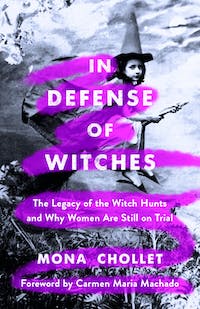 Centuries after the infamous witch hunts that swept through Europe and America, witches continue to hold a unique fascination for many: as fairy tale villains, practitioners of pagan religion, as well as feminist icons. Witches are both the ultimate victim and the stubborn, elusive rebel. But who were the women who were accused and often killed for witchcraft? What types of women have centuries of terror censored, eliminated, and repressed?

Celebrated feminist writer Mona Chollet explores three types of women who were accused of witchcraft and persecuted: the independent woman, since widows and celibates were particularly targeted; the childless woman, since the time of the hunts marked the end of tolerance for those who claimed to control their fertility; and the elderly woman, who has always been an object of at best, pity, and at worst, horror. Examining modern society, Chollet concludes that these women continue to be harrassed and oppressed. Rather than being a brief moment in history, the persecution of witches is an example of society’s seemingly eternal misogyny, while women today are direct heirs to those who were hunted down and killed for their thoughts and actions.

With fiery prose and arguments that range from the scholarly to the cultural, In Defense of Witches seeks to unite the mythic image of the witch with modern women who seek to live their lives on their own terms.

“A thought-provoking, discursive survey by a bright light of Francophone feminism . . . In today’s France, Chollet has emerged as a quiet revolutionary, pushing back against the clichés and the patriarchy that shapes them . . . In Defense of Witches demonstrates that a woman’s decision to go against the grain—especially by not having children—inevitably becomes a political act, even an act of resistance.”—Rachel Donadio, The New York Times Book Review

“Rehabilitates the figure of the witch, this dangerously independent, educated and strong woman.”—Slate

“Allows us to understand . . . the witch hunts of the past influenced the representation of women today.”—Le Monde

“Mona Chollet demonstrates how . . . those who emancipate themselves from certain social norms, are in fact direct heirs of those that were hunted down censored, and eliminated during the Renaissance.”—Huffington Post

“Explores the worldview that the witch hunt has sought to promote—and its consequences on society today.”—Vice

“A smart feminist treatise reclaiming the witch and her radical way of life as a path forward for women . . . Chollet’s informed and passionate treatment will appeal to readers looking for more substance amid the witch trend that’s otherwise been largely commodified and often scrubbed of its feminist origins.”—Jenna Jay, Booklist


Of course, there was the one in Walt Disney’s Snow White, all stringy gray hair under her black hood, a wart on her crooked nose, her inane rictus revealing a single tooth left...

Mona Chollet is a Franco-Swiss writer and journalist. She is the chief editor for Le Monde diplomatique and has also written for Charlie Hebdo. She is the author of In Defense of Witches and several other books in French. She lives in Paris, France.