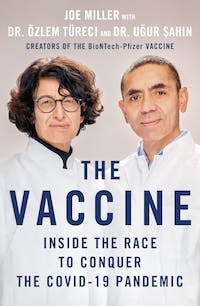 Nobody thought it was possible. In mid-January 2020, Ugur Sahin told Özlem Türeci, his wife and decades-long research partner, that a vaccine against what would soon be known as COVID-19 could be developed and safely injected into the arms of millions before the end of the year. His confidence was built upon almost thirty years of research. While working to revolutionize the way that cancerous tumors are treated, the couple had explored a volatile and overlooked molecule called messenger RNA; they believed it could be harnessed to redirect the immune system's forces against any number of diseases. As the founders of BioNTech, they faced widespread skepticism from the scientific community at first; but by the time Sars-Cov-2 was discovered in Wuhan, China, BioNTech was prepared to deploy cutting edge technology and create the world’s first clinically approved inoculation for the coronavirus.

The Vaccine draws back the curtain on one of the most important medical breakthroughs of our age; it will reveal how Doctors Sahin and Türeci were able to develop twenty vaccine candidates within weeks, convince Big Pharma to support their ambitious project, navigate political interference from the Trump administration and the European Union, and provide more than three billion doses of the Pfizer/BioNTech vaccine to countries around the world in record time.

Written by Joe Miller—the Financial Times’ Frankfurt correspondent who covered BioNTech’s COVID-19 project in real time—with contributions from Sahin and Türeci, as well as interviews with more than sixty scientists, politicians, public health officials, and BioNTech staff, the book covers key events throughout the extraordinary year, as well as exploring the scientific, economic, and personal background of each medical innovation. Crafted to be both completely accessible to the average reader and filled with details that will fascinate seasoned microbiologists, The Vaccine explains the science behind the breakthrough, at a time when public confidence in vaccine safety and efficacy is crucial to bringing an end to this pandemic.

“They are the symbol of a remarkable scientific and business success story.”—Financial Times

“The story of their quest to use a novel scientific method to defeat that disease, as well as cancer and others, would suffice to make them heroes of our time.”—Bloomberg

“Özlem Türeci and Ugur Sahin are rapidly becoming the most celebrated marriage in science since Marie and Pierre Curie discovered radioactivity.”—The Times (London)

"I have now read the book by Joe Miller about the development of the vaccine at BioNTech. Ugur Sahin had already understood the scale of the pandemic on 24 January. I wasn't that quick."—Angela Merkel, former Chancellor of Germany, Süddeutsche Zeitung

"A fine account of a medical tour de force."—Kirkus Reviews

"A fascinating survey of the remarkable achievements of doctors Türeci and Sahin, a married couple whose groundbreaking work on messenger RNA led to the rapid development of the Covid-19 vaccine."—Publishers Weekly

Joe Miller is the Frankfurt correspondent for Financial Times. He previously reported for BBC News in London, New York, Delhi, and Berlin.

Dr. Ugur Sahin and Dr. Özlem Türeci are the husband-and-wife team that cofounded BioNTech, developer of the world’s first COVID-19 vaccine. The children of Turkish migrant workers in Germany, they trained as medical doctors and earned doctorates in molecular biology and immunotherapy. They have done extensive work in the field of translational oncology and written hundreds of scientific papers and patents. Sahin and Türeci received the 2022 Paul Ehrlich Prize for their contributions to research into mRNA technology.

Joe Miller in the Financial Times