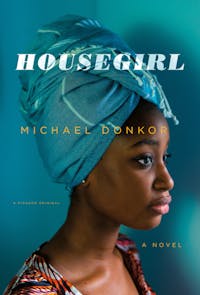 Belinda knows how to follow the rules. As a housegirl, she has learned the right way to polish water glasses, to wash and fold a hundred handkerchiefs, and to keep a tight lid on memories of the village she left behind when she came to Kumasi.

Mary is still learning the rules. Eleven-years-old and irrepressible, the young housegirl-in-training is the little sister Belinda never had.

Amma has had enough of the rules. A straight-A student at her exclusive London school, she has always been the pride of her Ghanaian parents—until now. Watching their once-confident teenager grow sullen and wayward, they decide that sensible Belinda is the shining example Amma needs.

So Belinda must leave Mary behind as she is summoned from Ghana to London, where she tries to impose order on her unsettling new world. As summer turns to autumn, Belinda and Amma are surprised to discover common ground. But when the cracks in their defenses open up, the secrets they have both been holding tightly threaten to seep out.

"The friendship that gradually develops between Belinda and Amma is very persuasively observed—an intimacy forged through drunken, unsupervised house parties in the long summer after A-levels; wilful misbehaviour at dressy Ghanaian expat gatherings; and backs-to-the-wall standoffs with hostile Jamaican girls on the bus down Coldharbour Lane… Donkor’s principal achievement is the dignity and generosity of spirit with which he imbues a central character from a largely invisible seam of African society."—Alfred Hickling, The Guardian

"At times, there are flashes of Jane Eyre in Belinda’s role as a 'governess' of sorts, but there is no Mr. Rochester to save her from her life, nor a sugary ending. The focus is on the love that flows between women and the need for Belinda to find a place that feels like home . . . (A) warm and accomplished novel."—Arifa Akbar, The Observer

"Donkor’s debut novel concerns itself with those who don’t traditionally get much of a look-in when it comes to fiction: two Ghanaian housegirls . . . A warm and intelligent story,offering full-bodied characters and a fortifying examination of courage."—The Mail on Sunday

"Donkor’s dense descriptions of life in Ghana and London capture the dazzling disorientation of a young village girl on her own. Compelling female characters abound; it’s surprising to discover a young male writer who so successfully inhabits a female point of view."—Reba Leiding, Library Journal (starred review)

"Confident and illuminating...An intimate and resonant take on finding one's place in the world even while being pulled in opposing directions."—Kirkus Reviews


Belinda fidgeted in the dimness. She sat up, drawing her knees and the skimpy bedsheets close to her chest. Outside, the Imam’s rising warble summoned the town’s Muslims to prayer....

Michael Donkor was born in London, to Ghanaian parents. He studied English at Wadham College at the University of Oxford, undertook a masters in creative writering at Royal Holloway, and now teaches English literature to secondary school students. In 2014, his writing won him a place on the Writers' Centre Norwich Inspires Scheme, where he received a year's mentoring from Daniel Hahn. Housegirl is his first novel, and many of the issues in it are close to his heart.