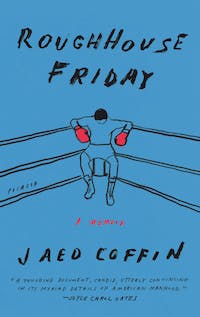 While lifting weights in the Seldon Jackson College gymnasium on a rainy autumn night, Jaed Coffin heard the distinctive whacking sound of sparring boxers down the hall. A year out of college, he had been biding his time as a tutor at a local high school in Sitka, Alaska, without any particular life plan. That evening, Coffin joined a ragtag boxing club. For the first time, he felt like he fit in.

Coffin washed up in Alaska after a forty-day solo kayaking journey. Born to an American father and a Thai mother who had met during the Vietnam War, Coffin never felt particularly comfortable growing up in his rural Vermont town. Following his parents’ prickly divorce and a childhood spent drifting between his father’s new white family and his mother’s Thai roots, Coffin didn’t know who he was, much less what path his life should follow. His father’s notions about what it meant to be a man—formed by King Arthur legends and calcified in the military—did nothing to help. After college, he took to the road, working odd jobs and sleeping in his car before heading north.

Despite feeling initially terrified, Coffin learns to fight. His coach, Victor “the Savage,” invites him to participate in the monthly Roughhouse Friday competition, where men contend for the title of best boxer in southeast Alaska. With every successive match, Coffin realizes that he isn’t just fighting for the championship belt; he is also learning to confront the anger he feels about a past he never knew how to make sense of.

Deeply honest and vulnerable, Roughhouse Friday is a meditation on violence and abandonment, masculinity, and our inescapable longing for love. It suggests that sometimes the truth of what’s inside you comes only if you push yourself to the extreme.

"[A] lucidly written memoir . . . At its heart, Roughhouse Friday details Coffin’s hunger for a language he can call his own . . . Coffin’s triumph lies in ridding the language of his father, a language that compelled him to dwell in a house he did not recognize."—Matthew Janney, The Los Angeles Review of Books

“Roughhouse Friday is as bare and intimate a rendering of masculinity, of young adulthood, of being human as I have ever read. This is a fearless and exquisite work of art.”—Lily King, author of The New York Times bestseller Euphoria

“Roughhouse Friday is one of the most convincing memoirs I have read tracking the mysterious course of an obsession—in this case, an obsession with fighting (i.e., 'boxing') against all odds of success and in the face of much risk. It’s a touching document, candid, utterly convincing in its myriad details of American manhood and in the clarity with which the young, aspiring boxer assesses his life.”—Joyce Carol Oates

“Jaed Coffin’s gripping memoir, Roughhouse Friday, is an important addition to Asian American literature—to American literature, more properly. It is many things: a gritty memoir of bar boxing in Alaska, a clear-eyed and honest study of Asian American—and American—masculinity, a nuanced exploration of identity and violence, and an emotional narrative of family relations. He writes from a fertile perspective: the son of a Thai mother and a white GI father who left the family when he was two. His deft writing reminds me of writers like Joan Didion in his eye for incisive detail and his refusal to simplify or flinch in his examination of what is an emotionally and morally complex phenomenon: human behavior.”—Brian Ascalon Roley, author of American Son

“Underneath an enjoyable, rough-and-tumble 'boys searches for meaning' lies a memoir with hidden depths and subtleties; an unflinching self-examination about an American Boy indelibly stamped by the complexities of his American experience: betrayal and dislocation, misunderstanding, racism, loneliness; shaded in the schizophrenic viewpoint of a first-world child with a parent from the third world. In Jaed’s quixotic journey to become heroic in his father’s gaze, his desire to be a formidable or dangerous man, he puts himself under the microscope; and we’re all the better for it, because we can all recognize ourselves on that same path.”—Sam Sheridan, author of A Fighter's Heart

“We’ve long known that a handful of great writers can tell us about boxing: Oates, Hamill, and Mailer come to mind. But here’s a memoir by a luminous writer who understands boxing from the inside, as a boxer. Jaed Coffin’s book is an adventure and coming-of-age story but also an intimate meditation on masculinity and violence, on using the ring to sort out questions of identity, purpose, and anger. Roughhouse Friday puts the fight back into growing up.”—Ted Conover, author of Coyotes and Newjack

"The strength of the narrative derives from Coffin’s vivid and perceptive accounts of the boxing matches and the participants, each with varying boxing abilities and their own individual scores to settle . . . A compelling story of small-town boxing in Alaska and a complex examination of masculine identities."—Kirkus Reviews

"[A] lyrical account of [the author's] eventful initiation into the world of amateur boxing . . . In measured, lucid prose, Coffin writes of fight night scenes . . . and of the insecurity of angry young men. He finds that he is losing faith in his father’s heroic myths even as he struggles to embody them; nevertheless, it’s his father to whom he continually turns for answers up until the end. This is a powerful, wonderfully written exploration of one’s sense of manhood."—Publishers Weekly (starred review)

I was lifting weights in the Sheldon Jackson College Gymnasium on a Friday night in early October when I heard the sound coming down the hall.

The weight room was on the second floor...

Jaed Coffin is the author of the memoir A Chant to Soothe Wild Elephants and teaches in the University of New Hampshire’s MFA creative writing program. He lives in Brunswick, Maine.

Listen to Stories by the Author at the Moth