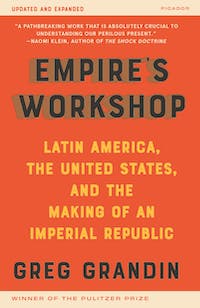 An excavation of a long-obscured history, Empire's Workshop is the first book to show how Latin America has functioned as an indispensable laboratory for America's rise to world power. Historian Greg Grandin follows the United States's imperial operations, from Thomas Jefferson's aspirations for an "empire of liberty" that would govern Cuba and Spanish Florida to Franklin Delano Roosevelt's Good Neighbor Policy, which taught the U.S. how to use "soft power" more effectively and provided a blueprint for its postwar European and Asian "empire by invitation."

Empire's Workshop is also the first book to examine how a preemptive foreign policy in Latin America, which included sponsoring coups, death-squad states, and paramilitary insurgencies, has transformed America's domestic politics, forging today's ruling coalition of neoconservatives, Christian evangelicals, free marketeers, and nationalists. The road to war in Iraq, Grandin argues, can be traced back to the 1970s and 1980s, when an increasingly internationalist New Right turned to Latin America to avenge Vietnam, and in so doing rehabilitated militarism as a legitimate instrument of the state and made free-market capitalism the moral core of American purpose abroad.

Today, much of Latin America is in open rebellion against American domination. Grandin concludes with a sobering analysis of these explosive tensions and poses a vital question: If Washington has been unable to bring prosperity, stability, and democracy to Latin America—its own backyard "workshop"—what are the chances it will do so for the world?

"A provocative and lucid writer, Grandin examines how the United States has used Latin America as a proving ground for imperial war strategies employed later elsewhere, most recently in Iraq . . . An important book that deserves a wide audience."—Roger Atwood, The Washington Post

"Fifteen years since its original publication, historian Greg Grandin has revised and reissued his now classic book, Empire’s Workshop. Having dedicated the intervening years to studying US imperial power through the prism of figures from Herman Melville and Andrew Jackson to Henry Ford and Kissinger, Grandin’s razor-sharp insight into the structural contradictions of the US imperialist project make this work required reading."—Jacobin

"Grandin convincingly argues that Latin America served as a crucible in which the ingredients of current U.S. foreign policy were first blended . . . With its vivid depiction of neocon militarists, religious evangelicals, and neoliberal economists coming together, Empire's Workshop offers a cogent analysis of how past interventions in Latin America provide the Bush administration with a troubling model for present policy."—Mark Engler, Mother Jones

"[A] well-written history of American interventions in Latin America . . . [and] another in the continuing series The American Empire Project, Empire's Workshop adds another strong perspective to the historical development of the American Empire."—Jim Miles, Palestine Chronicle

"[This book] is a must read for anyone trying to understand the Bush Administration's increasing hostility toward Venezuela . . . It helps us understand the vast arsenal of tools that the U.S. government and transnational capital have at their disposal, but it also focuses our anger and the importance of popular resistance to Empire . . . [It] is a good primer for our continuing education."—Chuck Kaufman, Nicaragua Monitor

"The Americans who engineered countless military coups, death squads and massacres in Latin America never paid for their crimes—instead they got promoted and they're now running the 'War on Terror.' Grandin had always been a brilliant historian, now he uses those detective skills in a book that is absolutely crucial to understanding our present."—Naomi Klein, author of No Logo

"Greg Grandin knows the history of modern Guatemala better than anybody else in the world outside of that country—and therefore understands the nature of U.S. attitudes and action toward Latin America at their most disturbing. This grants him keen insight into the manic ferocity behind U.S. imperialism across the globe today, which he describes in fine, rich, vivid, bitter detail. Grandin also shrewdly observes that the outrages possible in little U.S. neo-colonies are not so easy to accomplish on a grand scale. His admirable book deserves many, many serious readers."—John Womack, Robert Woods Bliss Professor of Latin American History and Economics, Harvard University and author of Zapata

"Most Americans pay little attention to our southern neighbors; however, according to NYU Latin American history professor Grandin, the U.S. government has indeed been paying attention to the region. Grandin contends that Latin America has been a testing ground—a laboratory, if you will—for the U.S. government to exercise its imperialistic tendencies. Grandin argues that U.S.-Latin American relations, from the administration of Thomas Jefferson up to the present Bush presidency, should be seen as sure indication the U.S. has always harbored imperial intentions. Our interventions in Latin America, both military and economic, have gone on repeatedly over the decades and reveal that the current administration's foreign policy, built on the concept of using military action to spread and establish our 'ideals,' is nothing new; it's been practiced in Latin America again and again . . . Well presented."—Booklist

"If you want to know why the American intervention in Iraq has failed, look at the El Salvador of a quarter-century ago. Latin America, writes Grandin, has been a proving ground for America's imperial ambitions since the Jefferson administration. Over the last 200 years, he argues, 'two broad arcs of hostility have defined U.S.-Latin American relations.' The first is a pattern of direct military intervention, usually to protect American economic interests; the second, often carried out by proxy, pretends to nobler goals such as containing communism or drug smuggling or, now, terrorism. Grandin holds that a third period is dawning, one in which America projects military and economic power to 'guard against the resurgence of a new, continent-wide democratic left,' which has indeed emerged in Brazil, Bolivia and Venezuela and may soon sweep Mexico, bringing dreaded red flags to America's borders. Grandin suggests that this is justifiable, for the end product of America's imperialism in Latin America has been an impoverishment of the region, thanks to the neoliberal 'economic regime heralded by Milton Friedman and his colleagues and imposed by Reagan and his successors'; at the end of the 1960s, 11 percent of Latin Americans lived on less than $2.00 a day, whereas by 1996 the number had grown to 33 percent, or 165 million people. This pattern holds in El Salvador, ravaged by U.S.-backed death squads in the '70s and '80s and monitored by then-junior U.S. officials who now hold command, among them Donald Rumsfeld and Dick Cheney. The latter, Grandin observes, once argued that El Salvador, 'with 50 percent of its population below the poverty level, was a model for what his administration hoped to achieve in Iraq.' Nixon observed that the U.S. could do what it wanted in Latin America because his compatriots didn't give a damn about the place. Grandin's excellent book makes a good case for caring."—Kirkus Reviews

"America's post-9/11 policy of idealistic military adventurism has a long history, argues this incisive study. NYU historian Grandin sketches the vexed course of U.S. relations with Latin America, but focuses on the Reagan administration's involvement in Central America during the 1980s, when it backed the Salvadoran government in a brutal civil war against left-wing insurgents and the Nicaraguan Contras against the Sandinista regime. Then as now, Grandin contends, Washington justified a militarist stance by citing a threat to America (Communists advancing on the Rio Grande) and championing democracy and human rights. America did not send troops but did sponsor native death squads in El Salvador, and the author notes recent press reports that the U.S. military is sponsoring similar death squads in Iraq . . . This timely book offers an analysis of the ideological foundations of today's foreign policy consensus and a cautionary tale about its dark legacy."—Publishers Weekly

The Camel Not in the Quran


THE ARGENTINE WRITER Jorge Luis Borges once remarked that the lack of camels in the Quran proves its Middle Eastern provenance: only a native author, he explained, could have so taken the...

Greg Grandin is the author of The End of the Myth, which won the Pulitzer Prize, and Fordlandia, a finalist for the Pulitzer Prize, the National Book Award, and the National Book Critics Circle Award. His widely acclaimed books also include The Last Colonial Massacre, Kissinger's Shadow, and The Empire of Necessity, which won the Bancroft and Beveridge awards in American history. He is Peter V. and C. Van Woodward Professor of History at Yale University.