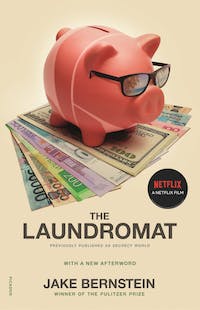 A hidden circulatory system flows beneath the surface of global finance, carrying trillions of dollars from drug trafficking, tax evasion, bribery, and other illegal enterprises. This network masks the identities of the individuals who benefit from these activities, aided by bankers, lawyers, and auditors who get paid to look the other way.

In The Laundromat, the Pulitzer Prize winning investigative reporter Jake Bernstein explores this shadow economy and how it evolved, drawing on millions of leaked documents from the files of the Panamanian law firm Mossack Fonseca—a trove now known as the Panama Papers—as well as other journalistic and government investigations. Bernstein shows how shell companies operate, how they allow the superwealthy and celebrities to escape taxes, and how they provide cover for illicit activities on a massive scale by crime bosses and corrupt politicians across the globe.

Bernstein traveled to the Caribbean, Latin America, Europe, and within the United States to uncover how these strands fit together—who is involved, how they operate, and the real-world impact. He recounts how Mossack Fonseca was exposed and what lies ahead for the corporations, banks, law firms, individuals, and governments that are implicated.

The Laundromat offers a disturbing and sobering view of how the world really works and raises critical questions about financial and legal institutions we may once have trusted.

"Bernstein, a Pulitzer Prize-winning journalist, draws on the trove of leaked documents from the Panamanian law firm Mossack Fonseca to expose how the wealthy hide income and evade taxes through offshore bank accounts and shell companies in island havens."—Joumana Khatib, The New York Times Book Review

"[Bernstein] concentrates on telling the stories of those who broke the law, evaded taxes, circumvented international sanctions, hid assets, cheated partners, or 'normalized' fortunes made through crime and corruption."—The Washington Post

"Bernstein has followed the leads backwards and forwards. He fills in the details of who the players are and how they got there. He also takes some minor side trips to corrupt practices like drug dealing, a slave ship, abandoned construction and a fraudulent reinsurer, to show how these players are actively ruining the lives of others with their fake firms . . . Bernstein has an interesting style. He does with paragraphs what good writers do with chapters—entice. His paragraphs become cliffhangers for the next paragraph, keeping the reader hooked over a long, incredibly diverse and involved exposé. He gives the Panama Papers worldwide relevance."—San Francisco Review of Books

“A searching look at the tangled, deeply buried financial network exposed by the publication of the so-called Panama Papers. . . . Bernstein does first-rate work in providing a map to a scandal that has yet to unfold completely.”—Kirkus Reviews (starred review)

"Well sourced and nontechnical, this work reads like the script to the next James Bond film."—Library Journal


Against the backdrop of a brilliant blue sky, a disembodied voice, vaguely recognizable from the world of advertising, declares: “All our dreams can come true, if we have the courage...

Jake Bernstein was a senior reporter on the International Consortium of Investigative Journalists team that broke the Panama Papers story. In 2017, the project won the Pulitzer Prize for Explanatory Reporting. Bernstein earned his first Pulitzer Prize in 2011 for National Reporting, for coverage of the financial crisis. He has written for The Washington Post, Bloomberg, The Guardian, ProPublica, and Vice, and has appeared on the BBC, NBC, CNN, PBS, and NPR. He was the editor of The Texas Observer and is the coauthor of Vice: Dick Cheney and the Hijacking of the American Presidency.