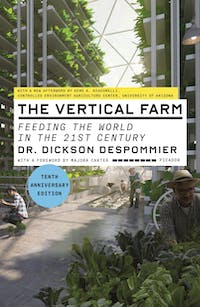 When Columbia professor Dickson Despommier set out to solve America's food, water, and energy crises, he didn't just think big—he thought up. Despommier's stroke of genius, the vertical farm, has excited scientists, architects, and politicians around the globe. In this book, Despommier explains how the vertical farm could change the face of this planet for future generations.

Despommier takes readers to explore the vertical farm, buildings filled with fruits and vegetables that will provide local food sources for entire cities.

Vertical farms will allow communities to:

—Grow food 24 hours a day, 365 days a year
—Protect crops from unpredictable and harmful weather
—Re-use water collected from the indoor environment
—Provide jobs for residents
—Eliminate use of pesticides, fertilizers, or herbicides
—Drastically reduce dependence on fossil fuels
—Prevent crop loss due to shipping or storage
—Stop agricultural runoffVertical farms can be built in abandoned buildings and on deserted lots, transforming our cities into urban landscapes which will provide fresh food grown and harvested just around the corner. They could put a safe, efficient, and dependable food source in every town.

Possibly the most important aspect of vertical farms is that they can built by nations with little or no arable land, transforming nations which are currently unable to farm into top food producers. Despommier shows why traditional agriculture is no longer viable and explains how vertical farms could supply the growing demand for nourishment on this planet—and change the way communities all over the world operate, from the ground up.

"A book you will read, and then you will read it again. It is a book that could begin a revolution. Let's hope it does . . . The Vertical Farm is easily accessible to subject novice and expert alike . . . Not at all a how-to book for small-scale change, the plan described will influence the future of more than just farming. Despommier invites the reader to realize a bigger future of sustainability, even better than we can imagine . . . If you are anyone who is looking for a more hopeful future, you need to read this book."—Chicago Examiner

"Despommier has quickly become the central figure in what could be a worldwide revolution."—Scientific American

"Nobody has ever dreamed as big as Dr. Dickson Despommier."—New York Magazine

"Persuasive . . . Given Dr. Despommier's scientific background we might expect this book to be a dry recitation of facts and figures, but nothing could be further from the case. Despommier writes passionately and argues, at times, even stridently."—The New York Journal of Books

"Despommier looked well outside the box when he began investigating ways to improve the growing and distribution of food crops. The result is a revolutionary theory that could allow the growth of food crops 24 hours a day, 365 days a year; protect crops from weather; reuse water; provide jobs for local people; eliminate the need for pesticides, fertilizers; and herbicides; reduce dependence on fossil fuels; prevent crop loss due to shipping and storage; and do away with agricultural runoff. The answer is the vertical farm."—The Globe and Mail (Toronto)

"Dickson Despommier is a futurist, an architect, and an intellectual in the same vein as Leonardo da Vinci, I. M. Pei, and Buckminster Fuller. Vertical farms will be remembered as one of the preeminent breakthroughs of the early 21st century, and Despommier will be remembered as the man who brought them to us."—Josh Tickell, director of Fields of Fuel, winner of a Sundance Film Festival Audience Award for Best Documentary

"This book makes the case that urban agriculture can go vertical as well as horizontal, putting all those expanses of pretty glass to some actual use!"—Bill McKibben, author of Eaarth: Making a Life on a Tough New Planet

"Cities of the future must generate their own food supply. Dickson Despommier's elegant, simple answer for achieving this goal is vertical farming. Welcome to the third green revolution."—Peter Diamandis, Chairman of the X Prize Foundation and Co-Founder of the Singularity University

"A captivating argument that will intrigue general readers and give policymakers and investors much to ponder."—Kirkus Reviews

"A visionary known the world over, Despommier believes that the ‘vertical farm is the keystone enterprise for establishing an urban-based ecosystem' and for ‘restoring balance between our lives and the rest of nature."—Booklist (starred review)

Nothing endures but change.


DOWN ON THE FARM

Ten to twelve thousand years ago, all over the globe, humans began systematically to modify their environment by...

Dr. Dickson Despommier, with a Foreword by Majora Carter and an Afterword by Gene A. Giacomelli

DR. DICKSON DESPOMMIER spent thirty eight years as a professor of microbiology and public health in environmental health sciences at Columbia, where he has won the Best Teacher award six times, and received the national 2003 American Medical Student Association Golden Apple Award for teaching. His work on vertical farms has been featured on such top national media as BBC, French National television, CNN, The Colbert Report, and The Tonight Show, as well as in full-length articles in The New York Times, Time Magazine, Scientific American, and The Washington Post. He recently spoke at the TED Conference, Pop!Tech and the World Science Festival and has been invited by the governments of China, India, Mexico, Jordan, Brazil, Canada, and Korea to work on environmental problems. He has been invited to speak at numerous national and international professional annual meetings as a keynote speaker, and at universities, including Harvard and MIT. He is one of the visionaries featured at the Chicago Museum of Science and Technology, and he was inducted into the International Green Industry Hall of Fame in 2020. Despommier lives in Fort Lee, New Jersey.

Read Posts by the Author at Big Think