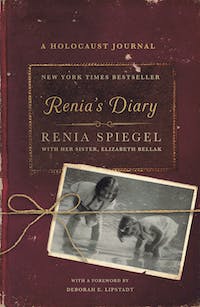 Renia Spiegel was born in 1924 to an upper-middle class Jewish family living in southeastern Poland, near what was at that time the border with Romania. At the start of 1939 Renia began a diary. “I just want a friend. I want somebody to talk to about my everyday worries and joys. Somebody who would feel what I feel, who would believe me, who would never reveal my secrets. A human being can never be such a friend and that’s why I have decided to look for a confidant in the form of a diary.” And so begins an extraordinary document of an adolescent girl’s hopes and dreams. By the fall of 1939, Renia and her younger sister Elizabeth (née Ariana) were staying with their grandparents in Przemysl, a city in the south, just as the German and Soviet armies invaded Poland. Cut off from their mother, who was in Warsaw, Renia and her family were plunged into war.

Like Anne Frank, Renia’s diary became a record of her daily life as the Nazis spread throughout Europe. Renia writes of her mundane school life, her daily drama with best friends, falling in love with her boyfriend Zygmund, as well as the agony of missing her mother, separated by bombs and invading armies. Renia had aspirations to be a writer, and the diary is filled with her poignant and thoughtful poetry. When she was forced into the city’s ghetto with the other Jews, Zygmund is able to smuggle her out to hide with his parents, taking Renia out of the ghetto, but not, ultimately to safety. The diary ends in July 1942, completed by Zygmund, after Renia is murdered by the Gestapo.

Renia's Diary has been translated from the original Polish, and includes a preface, afterword, and notes by her surviving sister, Elizabeth Bellak. An extraordinary historical document, Renia Spiegel survives through the beauty of her words and the efforts of those who loved her and preserved her legacy.

"The journal is first and foremost an intimate testimony of the challenges of becoming a woman and falling in love during a time of war. Renia, in many ways, represents tens of thousands of young women who lived during that time and whose lives were cut short before they could fully embrace their youth and first loves."—Joanna Berendt, The New York Times

"The diary is a lens into a life cut tragically short, and because the experience of her youth was all she had, her teenage angst takes on a poignancy it otherwise wouldn’t have."—Jewish Book Council

“Renia Spiegel, a young girl so filled with a zest for life and possessed of an ability to describe in prose and in poetry the beauty of the world around her, was denied with one bullet what she so wanted: a future . . . Those who saved the diary and those who worked to bring it to print, have 'rescued' her. They could not save her from a cruel fate. Nor could they give her that future she so desired. But they have rescued her from the added pain of having been forgotten.”—from the Introduction by Deborah E. Lipstadt, Dorot Professor of Holocaust History at Emory University and the author of Antisemitism: Here and Now

“Readers will naturally contrast Renia’s diary with Anne Frank’s. Renia was a little older and more sophisticated, writing frequently in poetry as well as in prose . . . Reading such different firsthand accounts reminds us that each of the Holocaust’s millions of victims had a unique and dramatic experience.”—Robin Shulman, Smithsonian magazine

“A terribly poignant work that conveys the brutal reality of the time through intimate connection with a young person.”—Kirkus Reviews

“Moving [and] riveting . . . this epic, layered story of survival serves as an important Holocaust document.”—Publishers Weekly


Why did I decide to start my diary today? Did something important happen? Have I discovered that my friends are keeping diaries of their own? No! I just want a friend. I want somebody I can talk to about my everyday worries...

RENIA SPIEGEL was born to a Jewish family in Poland in 1924. She began her diary at the start of 1939, right before the invasion of Poland by the German and Soviet armies. In 1942, she was forced to move to a ghetto, but was smuggled out by her boyfriend and went into hiding with his parents. She was discovered by the Gestapo and murdered on July 30, 1942.

ELIZABETH BELLAK (née Ariana Spiegel), born in 1930, was a child actress once called “the Polish Shirley Temple.” In 1942 she and her mother fled to Warsaw, and then to Austria, finally arriving in New York City, where she lives today.