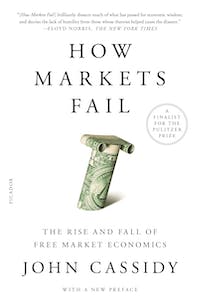 Behind the alarming headlines about job losses, bank bailouts, and corporate greed is a little-known story of bad ideas. For fifty years or more, economists have been busy developing elegant theories of how markets work—how they facilitate innovation, wealth creation, and an efficient allocation of society's resources. But what about when markets don't work? What about when they lead to stock market bubbles, glaring inequality, polluted rivers, real estate crashes, and credit crunches?

In How Markets Fail, John Cassidy describes the rising influence of what he calls utopian economics—thinking that is blind to how real people act and that denies the many ways an unregulated free market can produce disastrous unintended consequences. He then looks to the leading edge of economic theory, including behavioral economics, to offer a new understanding of the economy—one that casts aside the old assumption that people and firms make decisions purely on the basis of rational self-interest. Taking the global financial crisis and current recession as his starting point, Cassidy explores a world in which everybody is connected and social contagion is the norm. In such an environment, he shows, individual behavioral biases and kinks—overconfidence, envy, copycat behavior, and myopia—often give rise to troubling macroeconomic phenomena, such as oil price spikes, CEO greed cycles, and boom-and-bust waves in the housing market. These are the inevitable outcomes of what Cassidy refers to as "rational irrationality"—self-serving behavior in a modern market setting.

“Cassidy clearly knows a great deal of economics, and he tells his story extremely well . . . Many of his chapters—on the development of general equilibrium theory (how everything in the economy systematically depends on everything else), for example, or marginalism (why prices are determined by what we're prepared to pay for the very last item of something we buy, rather than what the whole amount is worth to us)—would make useful supplementary reading in an undergraduate economics course.”—Benjamin M. Friedman, The New York Review of Books

“[How Markets Fail] brilliantly dissects much of what has passed for economic wisdom, and decries the lack of humility from those whose theories helped cause the disaster.”—Floyd Norris, The New York Times

"[How Markets Fail] is more than just an account of the failures of regulators and the self-deception of bankers and homebuyers, although these are well covered. For Mr. Cassidy, the deeper roots of the crisis lie in the enduring appeal of an idea: that society is always best served when individuals are left to pursue their self-interest in free markets."—The Economist

"This is a book about how flawed ideas, and the people who promoted them, tipped us into the worst financial crisis since the Great Depression . . . This is a compelling synthesis that derives most of its narrative energy from the author's clarity of thought and exposition."—James Pressley, Bloomberg.com

"In his ambitious How Markets Fail: The Logic of Economic Calamities, Cassidy, an economics writer for The New Yorker, offers a powerful argument that the current generation of investors and policymakers has been manacled by what he calls the ‘utopian' free-market school of economics. In an effort to debunk that 'ideology,' which he sees as holding sway in academia and among policymakers in recent decades, Cassidy marshals a deep understanding of economic intellectual history, deftly explaining the principal ideas of such towering figures as Adam Smith, Friedrich von Hayek, Léon Walras, Kenneth Arrow, Milton Friedman, and Robert Lucas."—Chris Farrell, Business Week

"An essential, grittily intellectual, yet compelling guide to the financial debacle of 2009."—Geordie Greig, Evening Standard

"The last major attempt of 2009 to make sense of what has become of the discipline of economics."—Stefan Stern, Financial Times (UK)

"A well constructed, thoughtful and cogent account of how capitalism evolved to its current form."—Edmund Conway, The Daily Telegraph (UK)

"I started the year by reading a dozen books on the Wall Street implosion . . . How Markets Fail by John Cassidy has the best, deepest backstory, and is as well written as you would expect from someone who covers economics for The New Yorker."—Tom Stoppard

"An elegant, readable treatise on economics, swathed in current headlines . . . Cassidy delivers on the promise of his title, but he also offers a clear-eyed look at economic thinking over the last three centuries, from Adam Smith to Ben Bernanke, and shows how the major theories have played out in practice, often not well . . . Cassidy writes with terrific clarity and a finely tuned sense of moral outrage, yielding a superb book."—Kirkus Reviews (starred review)

"Both a narrative and a call to arms, [How Markets Fail] provides an intellectual and historical context for the string of denial and bad decisions that led to the disastrous ‘illusion of harmony,' the lure of real estate and the Great Crunch of 2008. Using psychology and behavioral economics, Cassidy presents an excellent argument that the market is not in fact self-correcting, and that only a return to reality-based economics—and a reform-minded move to shove Wall Street in that direction—can pull us out of the mess in which we've found ourselves."—Publishers Weekly

John Cassidy is a journalist at The New Yorker and a frequent contributor to The New York Review of Books. He is the author of Dot.con: How America Lost Its Mind and Money in the Internet Era and lives in New York City.

Read Articles by the Author at The New Yorker