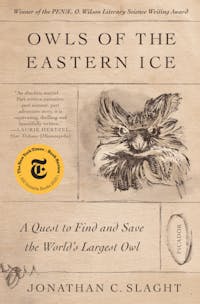 When he was just a fledgling birdwatcher, Jonathan C. Slaght had a chance encounter with one of the most mysterious birds on Earth. Bigger than any owl he knew, it looked like a small bear with decorative feathers. He snapped a quick photo and shared it with experts. Soon he was on a five-year journey, searching for this enormous, enigmatic creature in the lush, remote forests of eastern Russia. That first sighting set his calling as a scientist.

Despite a wingspan of six feet and a height of over two feet, the Blakiston’s fish owl is highly elusive. They are easiest to find in winter, when their tracks mark the snowy banks of the rivers where they feed. They are also endangered. And so, as Slaght and his devoted team set out to locate the owls, they aim to craft a conservation plan that helps ensure the species’ survival. This quest sends them on all-night monitoring missions in freezing tents, mad dashes across thawing rivers, and free-climbs up rotting trees to check nests for precious eggs. They use cutting-edge tracking technology and improvise ingenious traps. And all along, they must keep watch against a run-in with a bear or an Amur tiger. At the heart of Slaght’s story are the fish owls themselves: cunning hunters, devoted parents, singers of eerie duets, and survivors in a harsh and shrinking habitat.

Through this rare glimpse into the everyday life of a field scientist and conservationist, Owls of the Eastern Ice testifies to the determination and creativity essential to scientific advancement and serves as a powerful reminder of the beauty, strength, and vulnerability of the natural world.

"[An] engaging tale . . . Keeping us tucked close, we discover what it feels like to become aware of every little thing, to fully inhabit a living landscape. For this reason and others, this is an unusual (and welcome) book for our times . . . It is a testament to his talents as a writer-researcher that we appreciate why Slaght loves it here."—Tucker Malarkey, The New York Times Book Review

"A stellar example of the fruitful intersection of scientific inquiry, conservation advocacy and wilderness adventure. It belongs to a rare species of nature writing in which facts are delivered with both exactitude and storytelling panache . . . Owls is replete with the narrative excitements of serious stakes, daunting challenges and disappointing setbacks, from blizzards, roadblocks and frigid nocturnal vigils on icy riverbanks to technological failures, dangerously thin spring ice, and an exhausting, overly loquacious field assistant . . . [A] winning portrait of this rare creature."—Heller McAlpin, The Wall Street Journal

"An absolute marvel of a book. Part science narrative, part memoir, part adventure story, it is captivating, thrilling and beautifully written . . . Slaght is a terrific, thoughtful writer, and he tells his story well, with cliffhangers and drama, careful scientific observation and a dash of humor and humility."—Laurie Hertzel, Minneapolis StarTribune

"One of the surprise books of the year: the story of a man’s five-year journey into the Russian Far East to preserve the world’s most mysterious owl, brought to life by brilliant writing, dashes across thawing rivers and madcap secondary characters."—Richard Fitzpatrick, Irish Examiner

"A charming, lyrical and gently uplifting memoir of years spent in pursuit of a strange and beautiful bird . . . Exquisite prose punctuates his account . . . The owl’s sheer oddity draws the reader in. So does the weirdness of the humans who populate the region. This is a book heavy on moose meat, low-grade vodka, and all-male banyas (saunas) . . . Slaght does justice to the difficult, incremental and error-prone methodology by which we learn new things about our world with the goal of learning to live better within it."—Clement Knox, The Times (UK)

"One of the greatest survival adventure stories of our time . . . Slaght’s true story reads like the best of novels . . . In the league of Jack London and J.A. Baker, it’s a book packed to its brim with moments of courage in both body and spirit, and of a love for nature and untamed land."—Rae DelBianco, Ralph Lauren Magazine

“Until Jonathan C. Slaght, the world’s largest owls were mythic, seldom-seen forest phantoms. With this book, Slaght takes us with him to the wild and remote forests of the Russian Far East on a quest to track and study Blakiston’s fish owls. It is an absorbing account, richly detailed and gracefully written with humor and empathy. Owls of the Eastern Ice is a superb narrative devoted to the natural history and conservation of a rare and beautiful species.”—George B. Schaller, Wildlife Conservation Society

"A terrifically exciting account of [Slaght's] time in the Russian Far East studying Blakiston’s fish owls, huge, shaggy-feathered, yellow-eyed, and elusive birds that hunt fish by wading in icy water . . . Beautifully evokes the reality of fieldwork in remote regions and reminded me of a medieval quest . . . Even on the hottest summer days this book will transport you to a land of dark and snowbound forests.”—Helen Macdonald

“It’s said that there are two kinds of great stories—a stranger comes to town, and a person goes on a journey. Slaght’s brilliant book is the latter, a gripping tale of his quest to find—and save—one of the world’s most magnificent creatures. Along the way, we get a rare inside view of a land, a people, an elusive owl, and ultimately, the human spirit. Anyone who loves birds, science, travel, or just a riveting read will love this book.”—Jennifer Ackerman, author of Birds by the Shore

“In this vigorous, you-are-there natural history, Jonathan C. Slaght takes us on a heroic quest through one of the planet’s most fascinating and least explored ecoregions. Somewhere in this wintry world inhabited by tigers and bears, poachers and mystics, lurks an enormous owl all but unknown to the outside world. Slaght’s account of his intrepid search for this elusive creature is matched only by his portraits of the humans who share that same forest.”—John Vaillant, author of The Jaguar’s Children

“I loved Jonathan C. Slaght’s Owls of the Eastern Ice. It is a riveting adventure with one of the rarest and most fascinating birds in one of the remotest regions of the globe, with most interesting people.”—Bernd Heinrich, author of White Feathers

“Jonathan C. Slaght’s Owls of the Eastern Ice is an unforgettable account of one of the most arduous ornithological research projects of modern times. In a quest to track and protect the Blakiston’s fish owl, a nocturnal hunter that inhabits the riparian forests of Russia’s Far East, Slaght embarks on a years-long journey by snowmobile and truck across frozen rivers, near-impenetrable wilderness, and broken-down settlements. His backwoods encounters with scientists, hermits, drunks, and loggers resonate with strangeness and sadness, and his observations of the landscape and the elusive giant owl are filled with a sense of wonder. This is both nature writing and travel writing at their finest.”—Joshua Hammer, author of The Falcon Thief

“In Owls of the Eastern Ice, biologist Jonathan C. Slaght shares a world few outside the Russian Far East have ever even heard of—a harsh land of frozen rivers and snowy forests, hungry tigers, radioactive hot springs, weird hermits, and, lording over it all, the largest and most mysterious of all owls. Part scientific exploration, part adventure story, it is at its heart a rumination on learning the heart of a wilderness to save it.”—Scott Weidensaul, author of Living on the Wind

“A fascinating account of one man’s quest to conserve the magnificent fish owl of Eastern Asia, this is a book that feels both urgent and relevant.”—Christopher Skaife, author of The Ravenmaster

“Owls of the Eastern Ice is thrilling, high-spirited adventure that beautifully evokes Russia’s Far East and the strange, hardy beings, both human and wild, who inhabit it. Jonathan C. Slaght survives swift rivers, rapacious poachers, and ungodly quantities of cheap vodka in his heroic quest to protect the Blakiston’s fish owl, a creature that’s as wondrous and fierce as the landscape it haunts. Slaght’s story won’t just make you fall in love with a bird you’ve never seen, it will give you a new appreciation for the tenacity and resourcefulness of wildlife biologists on both sides of the Pacific.”—Ben Goldfarb, author of Eager: The Surprising, Secret Life of Beavers and Why They Matter

“A fish owl duet might fold into other sounds in the Russian forest, but this book has one of the clearest voices I have encountered. Slaght’s story reveals the patience and determination of a true conservationist. And the ears and eyes of a poet. Above all, he makes the people, wildlife and landscape of the Russian Far East come alive for armchair travelers. I haven’t enjoyed a book on remote Russia as much as this since Ian Frazier’s Travels in Siberia.”—Sophy Roberts, The Lost Pianos of Siberia

“Remarkable. If only every endangered species had a guardian angel as impassioned, courageous, and pragmatic as Jonathan C. Slaght.”—Isabella Tree, author of Wilding

"Slaght’s entertaining, sometimes elegant prose propels the narrative thrust of this book, and his scientific knowledge buoys the story from underneath. Owls reminds me of Helen Macdonald’s H is for Hawk and Robert Macfarlane’s Underland, in that an exploration into one thing (owls, the earth) ends up in other places (the human condition, personal reckonings)."—Kerri Arsenault

"As fine a writer as he is a scientist . . . Slaght's extensive field research is rendered into clear, readable prose, making it a solid choice for bird lovers, but also for armchair travelers looking for eco-adventure on the fringes of civilization."—Library Journal (starred review)

"A detailed and thrilling account . . . Readers will be drawn to this exciting chronicle of science and adventure."—Publishers Weekly

I SAW MY FIRST BLAKISTON’S FISH OWL in the Russian province of Primorye, a coastal talon of land hooking south into the belly of Northeast Asia. This is a remote corner of the world, not far from where Russia, China, and...

A Quest to Find and Save the World's Largest Owl

Watch the trailer of Owls of the Eastern Ice by Jonathan C. Slaght

Jonathan C. Slaght is the Russia and Northeast Asia coordinator for the Wildlife Conservation Society, where he manages research projects on endangered species and coordinates avian conservation activities along the East Asia–Australasian Flyway from the Arctic to the tropics. His annotated translation of Across the Ussuri Kray, by Vladimir Arsenyev, was published in 2016, and his work has been featured by The New York Times, The Guardian, the BBC World Service, NPR, Smithsonian Magazine, Scientific American, and Audubon magazine, among others. His new book, Owls of the Eastern Ice, won the PEN/E.O. Wilson Literary Science Writing Award as well as the Minnesota Book Award for General Nonfiction, and was longlisted for the National Book Award. He lives in Minneapolis.

Read Articles by the Author at Scientific American