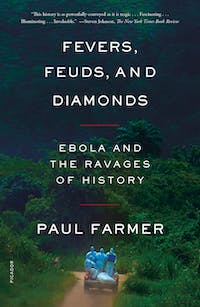 In 2014, Sierra Leone, Liberia, and Guinea suffered the worst epidemic of Ebola in history. The brutal virus spread rapidly through a clinical desert where basic health-care facilities were few and far between. Causing severe loss of life and economic disruption, the Ebola crisis was a major tragedy of modern medicine. But why did it happen, and what can we learn from it?

Paul Farmer, the internationally renowned doctor and anthropologist, experienced the Ebola outbreak firsthand—Partners in Health, the organization he founded, was among the international responders. In Fevers, Feuds, and Diamonds, he offers the first substantive account of this frightening, fast-moving episode and its implications. In vibrant prose, Farmer tells the harrowing stories of Ebola victims while showing why the medical response was slow and insufficient. Rebutting misleading claims about the origins of Ebola and why it spread so rapidly, he traces West Africa’s chronic health failures back to centuries of exploitation and injustice. Under formal colonial rule, disease containment was a priority but care was not—and the region’s health care woes worsened, with devastating consequences that Farmer traces up to the present.

This thorough and hopeful narrative is a definitive work of reportage, history, and advocacy, and a crucial intervention in public-health discussions around the world.

"[The] history is as powerfully conveyed as it is tragic. Farmer takes the reader through many fascinating episodes . . . By the time the chronology returns to the events covered in the opening chapters of the book . . . the facts recounted are, technically speaking, the same, but in the reader’s mind, they have been transformed from isolated symptoms into a much more profound diagnosis."—Steven Johnson, The New York Times Book Review

"With exceptional empathy and care, Paul Farmer takes us through his experience with that health crisis and the difficult history that made those populations particularly vulnerable in his new book . . . the book begins as a true life medical thriller . . . If what we want in this moment is insight from this brilliant doctor about pandemics, he wants us to see that they do not occur in isolation. America and European nations created the systemic inequality that left West Africa bereft and vulnerable. And systemic inequality leads to very different health outcomes. He urges us to right the balance, provide needed care."—Carolyn Kellogg, The Boston Globe

“As Paul Farmer asserts in his vital new book, the world has no business forgetting [Ebola’s] human toll . . . Fevers, Feuds, and Diamonds is bold, humane and rigorously researched . . . Sure to be one of the definitive texts on the subject . . . Anyone who comes to this book with an open mind will find it hard to dispute his premise.”—Kevin Canfield, San Francisco Chronicle

“Eye-opening, densely detailed, and riveting . . . When it comes to Ebola in 2014, Fevers, Feuds, and Diamonds is no armchair account . . . Only Paul Farmer, I think, in his ability to write so knowledgeably and with such love and hope for all of humanity, could coax me to read 526 pages of text about a viral outbreak during a viral pandemic . . . From Farmer we learn that a world needs not only a COVID vaccine, but something much more: a rejection of global racial inequalities and an embrace of investing seriously in the care of all people.”—Barbara J. King, NPR

“Paul Farmer brings his considerable intellect, empathy, and expertise to bear in this powerful and deeply researched account of the Ebola outbreak that struck West Africa in 2014. Fevers, Feuds, and Diamonds is a tribute to the men and women who perished caring for the sick, a celebration of those who survived, a rigorous work of historical analysis, and an urgent call to action in a world where inequality and epidemic disease continue to collide. It is hard to imagine a more timely or important book.”—Bill and Melinda Gates

"Paul Farmer's devastating account of catastrophic disease and death created by unjust systems, structures, and abusive history is timely, urgent and terrifying. This moving and compelling book is a tragic but necessary journey guided by an extraordinary anthropologist, historian, teacher, writer, and doctor who has served the poor and disfavored for decades. He has much to teach us in these perilous times."—Bryan Stevenson, author of Just Mercy

“Paul Farmer’s extraordinary, heart-rending book is a report from the trenches about people from many countries fighting, together, one of the toughest medical battles imaginable. It will leave you inspired, at times weeping, and with a deeper understanding of the way diseases are caused not just by viruses and bacteria, but by centuries of inhumanity.”—Adam Hochschild, author of King Leopold's Ghost and Rebel Cinderella

"In this riveting and beautifully written narrative, Paul Farmer gracefully intertwines memoir, biography, and the personal stories of medical professionals from Sierra Leone to provide a critically important corrective to the popular misconceptions concerning the African response to Ebola. Ultimately, Farmer challenges us, in the midst of the current pandemic, to act with decency and compassion as we struggle towards solutions."—Henry Louis Gates, Jr., Alphonse Fletcher University Professor, Harvard University

“This book could not be more timely. Using memoir and biography, social analysis and historical context, the great Paul Farmer paints a provocative picture of the 2014 Ebola outbreak, and illustrates how inequality and exploitation can fuel the spread of a deadly virus. It’s a riveting, relevant read from cover to cover.”—Darren Walker, president, Ford Foundation

“Farmer provides an insightful frontline account of the West African Ebola epidemic, and the interlocking vulnerabilities that fueled the international emergency. People and the everyday act of caring are rightfully at the heart of the book, with a strong reminder that epidemics move along the fault lines in society. As the world grapples with the COVID-19 pandemic, Fevers, Feuds, and Diamonds is important reading for understanding what is at stake and how we can collectively do better.”—Professor Peter Piot, Director of the London School of Hygiene & Tropical Medicine

"Fevers, Feuds, and Diamonds exemplifies Paul Farmer’s steadfast, world-changing commitment to health as an unassailable human right. In this tour de force, he wields the concision of a physician, the clear-eyed consideration of an anthropologist, and a moral compass fixed towards justice—what results is a profound meditation on the complex, compounding forces of colonialist legacies and global health frailties that fueled the West African Ebola Epidemic as it raged on."—Pardis Sabeti, professor of biology, Harvard University

“This story of the 2014 West African Ebola outbreak by an expert lacks the media hysteria common at the time but manages to be even more disturbing. Farmer, the chair of Global Health and Social Medicine at Harvard and founding director of Partners in Health, has spent his life delivering medical care to undeveloped nations—and writing engagingly about his experiences . . . Readers will be surprised to learn that, despite lurid accounts such as Richard Preston’s The Hot Zone, Ebola is not a death sentence."—Kirkus Reviews

"Farmer provides poignant personal accounts by Ebola survivors and health-care workers, a detailed history of the three Ebola-affected countries, and coverage of post-Ebola life, including the complications of the viral infection . . . A challenging, consequential, and tragically timely book about the forces that sculpt epidemics and the necessity of compassion and altruism in caring for their victims.”—Booklist (starred review)

“In his latest work, Farmer focuses on Ebola but also has relevant lessons for life during COVID-19. Blending medical history and anthropology, this book brings newfound awareness to the interconnectedness of West Africa, Europe, and the United States throughout the centuries . . . Throughout, readers are immersed in Farmer’s own recollections of his time working in West Africa and will be moved by the interwoven recollections of Ebola survivors along with the stories of those who died from the disease.”—Library Journal

"An incisive and deeply informed account of the Ebola outbreak ('the largest in recorded history') that engulfed West Africa in 2014. Placing the epidemic within the historical context of the transatlantic slave trade, European colonial rule, and more recent 'diamond-fueled' civil wars, Farmer argues that the disastrous 'control-over-care paradigm' used to combat Ebola had its roots in centuries of exploitation and neglect . . . Farmer’s detailed synthesis of the history behind the crisis enlightens, but poignant profiles of victims, survivors, and physicians, including Dr. Humarr Khan, Sierra Leone’s 'Ebola czar' who died from the illness, are the book’s greatest strength."—Publishers Weekly


Everybody knows that pestilences have a way of recurring in the world; yet somehow we find it hard to believe in ones that crash down on our heads from a blue sky. There have been as many plagues as...

Paul Farmer (1959-2022) was a founding director and chief strategist of Partners In Health, the Boston-based non-profit, social justice organization dedicated to providing quality, modern healthcare to impoverished regions around the world. A physician, anthropologist, and activist, he was also a Kolokotrones University Professor and Chair of Global Health and Social Medicine at Harvard University as well as chief of the Division of Global Health Equity at Boston’s Brigham and Women’s Hospital. Among his numerous awards and honors is the Public Welfare Medal from the National Academy of Sciences, a MacArthur Fellowship, and the Berggruen Prize.

The author of Fevers, Feuds, and Diamonds: Ebola and the Ravages of History, Infections and Inequalities: The Modern Plagues, and Pathologies of Power: Health, Human Rights and the New War on the Poor, Farmer, along with his fellow Partners In Health cofounders Jim Yong Kim and Ophelia Dahl, were featured in the documentary about their organization, Bending the Arc.