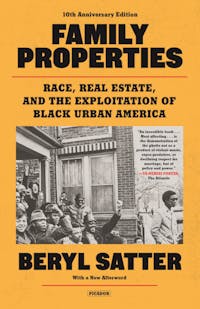 The "promised land" for thousands of Southern blacks, postwar Chicago quickly became the most segregated city in the North, the site of the nation's worst ghettos and the target of Martin Luther King Jr.'s first campaign beyond the South. In this powerful book, Beryl Satter identifies the true causes of the city's black slums and the ruin of urban neighborhoods throughout the country: not, as some have argued, black pathology, the culture of poverty, or white flight, but a widespread and institutionalized system of legal and financial exploitation.

In Satter's riveting account of a city in crisis, unscrupulous lawyers, slumlords, and speculators are pitched against religious reformers, community organizers, and an impassioned attorney who launched a crusade against the profiteers—the author's father, Mark J. Satter. At the heart of the struggle stand the black migrants who, having left the South with its legacy of sharecropping, suddenly find themselves caught in a new kind of debt peonage. Satter shows the interlocking forces at work in their oppression: the discriminatory practices of the banking industry; the federal policies that created the country's shameful "dual housing market"; the economic anxieties that fueled white violence; and the tempting profits to be made by preying on the city's most vulnerable population.

Part family story and part urban history, Family Properties is a landmark investigation of segregation and urban decay in Chicago—and cities across the nation. A monumental work of history, this tale of racism and real estate, politics and finance, will forever change our understanding of the forces that transformed urban America.

"Beryl Satter's Family Properties is really an incredible book. It is, by far, the best book I've ever read on the relationship between blacks and Jews. That's because it hones in on the relationship between one specific black community and one specific Jewish community and thus revels in the particular humanity of all its actors. In going small, it ultimately goes big."—Ta-Nehisi Coates, The Atlantic

"Historians who write about close friends or relatives do so at their peril. Personal engagement, so essential to the memoir, can confound historical judgment and scholarly detachment, especially when family honor hangs in the balance . . . Yet somehow [Satter] has managed to stay on course, using her considerable investigative skills and unwavering sense of fairness to write a revealing and instructive book . . . A cautionary tale of governmental complicity, Family Properties follows the social historian's dictum of 'asking big questions in small places.' It reminds us that history and memory are essential tools for anyone pondering our current predicament."—Raymond Arsenault, The New York Times Book Review

"The historian and the storyteller in Ms. Satter are never at war with each other. Family Properties is so packed with the horrors visited upon black families in Chicago from the 1940s through the 1970s that you will want to walk outside every 15 pages or so and simply scream in outrage. Yet her tone throughout is dispassionate. She is at heart a historian, not a memoirist. And she is a vertiginously good one. Her book is transfixing from its first sentence . . . the pleasures here are deep and resonant ones. Family Properties feels like something close to an instant classic."—Dwight Garner, The New York Times

"A penetrating examination of the financial discrimination that thousands of African Americans encountered in their northward migration to cities such as Chicago. Redlining is a familiar, if poorly understood, word for the refusal to insure mortgages in black neighborhoods. Satter shows how it worked in vivid, personal terms. Her painstakingly thorough portrayal of the human costs of financial racism is the most important book yet written on the black freedom struggle in the urban North . . . Family Properties is a superbly revealing and often gripping book."—David J. Garrow, The Washington Post

"A professor of history at Rutgers-Newark and a native of Chicago and its environs, Beryl Satter skillfully and creatively weaves the story of her own family into a powerful narrative of neighborhood decline, economic exploitation and individual and community activism. The result is a moving and eloquent account of the forces black Chicagoans were up against, and the efforts of reformers, black and white, to combat them. Hers is a complicated story that is extremely well told."—Eric Arnesen, Chicago Tribune

"Every now and then, the zeitgeist smiles down upon a writer and makes the subject she's been toiling over for a decade a hot topic at the time of publication. Such is the case with Beryl Satter's Family Properties: Race, Real Estate, and the Exploitation of Black America. Through the lens of history, Satter sheds crucial light on both the current subprime-mortgage crisis and the importance of community organizing in Chicago. If anyone still questions the significance of such organizing in the inner city, she should read Family Properties for a lesson in just how hard a job it is."—Helene Stapinski, Columbia Journalism Review

"For African Americans in 1950s Chicago, buying a house was nearly impossible. Federal mortgage insurance didn't cover homes in integrated neighborhoods, making getting a loan difficult; in black neighborhoods, predatory sellers jacked up prices and forced buyers to pay outrageous monthly fees or face eviction. The resulting financial strains only compounded black Chicagoans' housing problems and drove their neighborhoods into decline. Satter, a history professor at Rutgers University, illustrates her lucid analysis of race and class on Chicago's West Side with the experiences of her father, a white lawyer and landlord who crusaded against the city's discriminatory policies and fought those who exploited black homeowners. But the story doesn't end with his premature death in 1965, at 49. By the late 1960s, an increasingly informed and outraged community was fighting back on its own. The ultimate result was the Home Mortgage Disclosure Act, which required banks to document their loans and outlawed discriminatory practices."—Frances Romero, Time

"The search for the absent father—whether he's literally or emotionally absent—is a pervasive theme in theater, books and film. Rarely, however, does an author inject this theme into a work of scholarship, as Beryl Satter has in Family Properties: Race, Real Estate, and the Exploitation of Black Urban America. Satter's approach makes a lot of sense. She began to explore racist real estate practices in Chicago after she read her father's papers detailing his efforts to defeat these practices in the 1950s and '60s. This never-resolved creative tension between the personal and the academic animates Satter's book . . . Beryl Satter uses her history to shed light on a few larger debates. She links, for instance, the unscrupulousness of the real estate speculators to the excesses of lenders in the recent subprime mortgage crisis. In both cases, mortgage granters used legal means to prey on unknowing borrowers, and in both cases, minorities were more likely to be the victims . . . A thought-provoking contribution to recent urban history, more emotionally satisfying."—Peter Ephross, The Forward

"This sweeping chronicle of greed and racism combines a noble and tragic family history with a painful account of big city segregation and courageous acts of community resistance. In riveting stories and thoughtful analysis, Satter powerfully discloses how manipulation and abuse shattered lives and deepened urban inequality."—Ira Katznelson, author of When Affirmative Action Was White: An Untold Story of Racial Inequality in Twentieth-Century America

"Beryl Satter brings Chicago's West Side to life in this vivid history of a neighborhood fighting for survival. She gives the urban crisis a human face in unforgettable portraits of the slumlords and the activists and lawyers (including her father) who battled valiantly against them."—Thomas J. Sugrue, author of Sweet Land of Liberty: The Forgotten Struggle for Civil Rights in the North

"This history of a place called Lawndale, on the west side of Chicago, is an archetypal American story of struggle and rise, race and divisiveness, justice denied and then justice achieved. Clyde Ross, Ruth Wells, Mark J. Satter, Monsignor Egan, Jack Macnamara, and the others—these are American heroes. I was privileged to be briefly involved, and I'm so glad to see Family Properties, after all these years, that I could hoot with joy, and then weep."—David Quammen, author of Song of the Dodo: Island Biogeography in an Age of Extinction

"This is how the story of urban America after the Second World War ought to be written, with gritty realism and no illusions. Here is urban history as a drama of moral conflict and religious passion. Family Properties is a searing and deeply moving work, by a loving daughter and a great historian."—Robert Orsi, Professor of Religion and History, Northwestern University

"One of the most contentious issues of twentieth century America was the transformation of middle-class white neighborhoods into African-American slums. The cast of characters is familiar—unscrupulous realtors, heartless slumlords, promiscuous welfare mothers, rapacious drug dealers, corrupt politicians, discriminatory savings and loan associations, and a racist government. But Beryl Satter tells a different story, a nuanced story, and a personal story in this compelling re-examination of a phenomenon everyone knows about and no one understands. Family Properties will change the way you think about history and about causation."—Kenneth T. Jackson, Barzun Professor of History, Columbia University

"An engrossing look at the history of racist real-estate practices in Chicago, and the activists who fought for justice . . . Many of the problems and injustices she writes about still exist today, and she does an excellent job of documenting and explaining them for the lay reader. Comprehensive and compulsively readable."—Kirkus Reviews (starred review)

"Setting out to prove that the decline of black neighborhoods into slums had nothing to do with the absence of African-American resources and everything to do with subjugation and greed, Satter draws on her father's records to piece together a thoughtful and very personal account of the exploitation that kept blacks segregated and impoverished."—Publishers Weekly

Beryl Satter is the author of Each Mind a Kingdom and the chair of the Department of History at Rutgers University in Newark. She was raised in Chicago, Skokie, and Evanston, Illinois, and is a graduate of the Harvard Divinity School and the Yale American Studies program. For her work in progress on Family Properties, Satter received a J. Anthony Lukas citation. She lives in New York City.